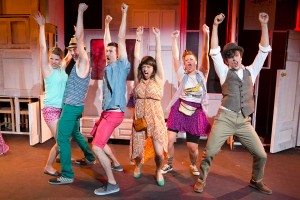 "Shoot the Freak" is a new play written by Jaclyn Backhaus and directed by Andrew Neisler. It's part of the "(not just) 3 New Plays" month-long theatrical event at Paradise Factory (64 E. 4th St.). It's the story of a group of friends who try to recreate a 2006 trip to Coney Island in the present day. But their dreams of relaxation, drinking, hot dogs and roller coasters are interrupted by the realities of crumbling relationships, age, and a Level Five Hurricane headed straight towards them. The play attempts to be a funny, energetic, and heartfelt story of facing reality and properly valuing those around you, but the results are often lackluster.

The script is extremely problematic. Jokes fall flat, characters don't behave realistically, and way too often one character will scream something ("shoot the freak") and the rest of the characters will repeatedly scream the same thing. It's frustrating to watch, and detracts from any scene. In general, the constant shouting in the play is unnecessary, and feels desperate and forced. The actors do their best to cover for the material, but the clearly forced high energy of their performances fails to establish a recognizable, believable range of emotions and behaviors that set live theater apart from material that needs to be workshopped and refined.

The plot follows Franny (Ryann Weir), the lovable oddball as she coaxes her friends into joining her on the trip. Earl (Ben Otto) and Jessie (Claire Rothrock) are a couple that have stayed together since the 2006 trip, but their relationship is not all it seems. The prissy Alison (Sarah Todes) used to date failed musician Grant (Jamie Effros) back in '06, but they've been broken up for a while, and she's accompanied by Marco (Maxwell Eddy), a two-dimensional Italian stereotype. The interactions of these characters feel shallow, and don't hold up to the way people actually behave.

The highlight of the play is definitely the cameo character of the Armenian Cyclone operator, also played by Ben Otto. His casual, relaxed performance is hilarious, and a breath of fresh air in the play. Things heat up as the Hurricane strikes, but the resolution is no more satisfying than the exposition. The "(not just) 3 New Plays" event was overall a success, but "Shoot the Freak" is its weakest link.