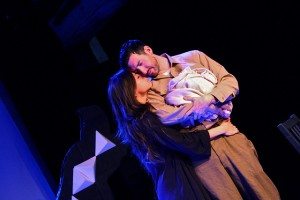 "Slaughterhouse-Five," a play based on the novel by seminal author Kurt Vonnegut, played several dates in August at The C.O.W. (21 Clinton Street). The play was part of the NY International Fringe Festival, the largest multi-arts festival in North America, running from August 9-25th with just under 200 shows playing in over 20 venues across the city.

"Slaughterhouse-Five," is the story of Billy Pilgrim (Jamie Effros), a lowly private in the Army during WWII who witnesses the devastating fire-bombing of Dresden, Germany from within a slaughterhouse while a captive of the Nazis. But the real story is Pilgrim's ability (or curse) of becoming "unstuck in time," which sees his consciousness skipping throughout his lifetime without any rhyme or reason. From his days as a baby, to a newlywed, to his death and captivity in an alien zoo, the audience must hold on for dear life and go on the ride with Pilgrim in a kaleidoscope of moments that paint a larger mosaic of his life, chronology be damned.

More than anything, "Slaughterhouse-Five," paid beautiful homage to one of the most beloved 20th Century American novels. Hilarious, disheartening, dramatic and sensual, the play succeeded where countless others would fail due to its pure immersion and loyalty to the source material. Director Jenny Beth Snyder has pulled off a coup and should be praised infinitely, in all moments as they coexist simultaneously.

Tweet us @StageBuddy and let us know what you thought of "Slaughterhouse-Five" and any other show you saw at the Fringe Festival.