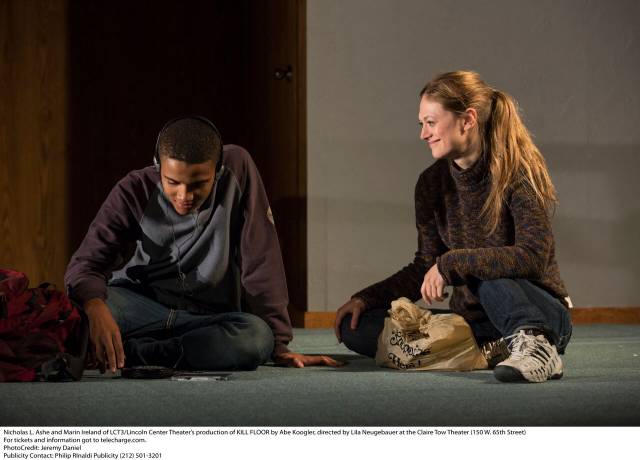 There are few workplaces with such bluntly descriptive names as the "kill floor," the place where cows are killed in a slaughterhouse. This is where the protagonist of LCT3's Kill Floor, Andy (Marin Ireland), lands her first job after five years in the big house. Seconds into the play, you also begin to understand the character as a blunt and no-nonsense woman desperately trying to get her life back together and return it to normal. Her hope for this lies in the slaughterhouse job and in her 15-year-old son, B (Nicholas L. Ashe), a kid who has long ago given up on his mother.

Kill Floor, written by Abe Koogler and directed by Lila Neugebauer, is not just a straight drama; it has many moments of subtle humor peppered throughout. But most of all, the play’s portrayal of flawed and awkward characters is sublime. The most notable is Ashe’s treatment of the complicated B, whose unwavering indifference to his mother is both sympathetic and frustrating. He is enamored of his classmate Simon (Samuel H. Levine) but unsure of how to handle those feelings. He’s a sensitive loner who is experiencing the confusing push-pull of wanting to be accepted by his peers and wanting to be true to himself. His friend Simon is an urban thug wannabe, a “conscious” rapper who is desperately trying to be cool while also struggling with the fear of people finding out that he enjoys the occasional blowjob from his friend B.

Andy’s boss, Rick (Danny McCarthy), someone Andy knows from high school but who can’t seem to remember her, exudes awkwardness by way of an inconvenient and premature crush on Andy. Popular in high school but now in an unhappy marriage, Rick is drawn to the fuck-up who relies on him for a job. He exploits his power by dangling the carrot of an office job over Andy, who is so eager to leave the nauseating kill floor but is trying to do the right thing by resisting her boss’ advances.

Ireland handles Andy’s situation with the determination of a woman who has lost everything but actually believes she can rebuild her life. She sees hope in Sarah (Natalie Gold), a woman she meets at the supermarket and to whom she reaches out in a vain attempt to have a normal life. It backfires when she realizes her life could never be like Sarah’s. Her attempts to reconnect with B are often misguided (his veganism and her job are almost always at odds) but are also rooted in hope that he will somehow save her, that his love will be the key to turning her life around. No matter how hard she tries, her biggest flaw is not acknowledging how messed up she was on drugs and failing to apologize for her actions leading up to her imprisonment.

The characters form the backbone of Kill Floor, a tableau of American Realism. You get to know these people and see them for who they are, flaws and all. They are human and real, and no matter how bad they seem, you are rooting for them in the end.