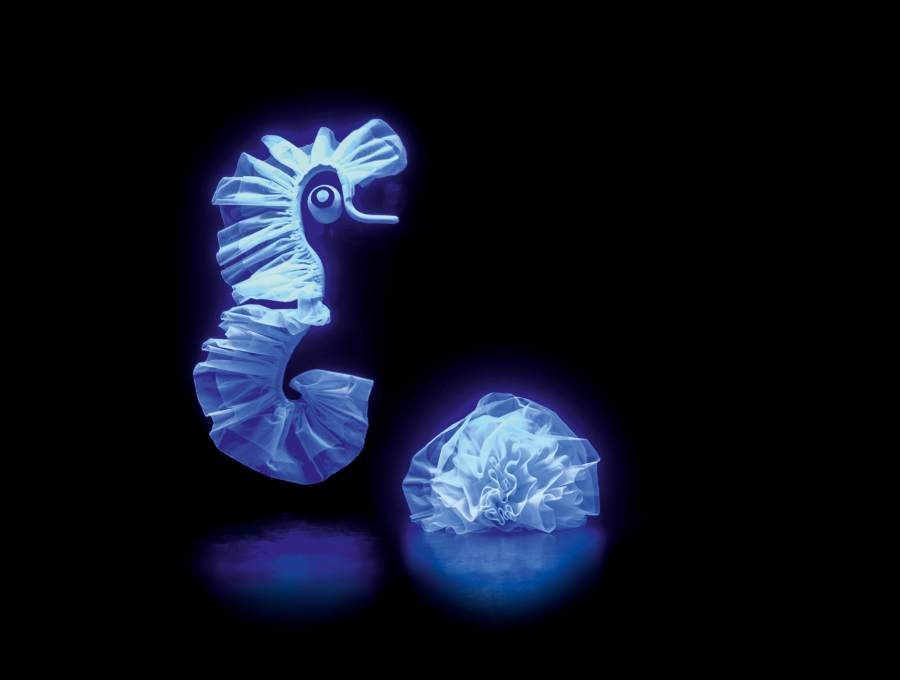 The sounds of silence are beautiful in a spectacular new show by the playful team of Swiss puppeteers known as Mummenschanz. The wordless You & Me was created by Mummenschanz co-founder and Artistic Director Floriana Frassetto and features a strong ensemble (who are nearly always invisible to the audience) including Christa Barrett, Kevin Blaser, Sara Francesca Hermann, and Oliver Pfulg. Playing at the Gerald W. Lynch Theater at John Jay College, Mummenschanz will delight audiences of all ages.

Using a wide array of materials in various shapes, sizes, and colors, the troupe uses clever movement and lighting to create poetic images that “tell a story” in short vignettes, all without uttering a word. The “puppets” are often simple shapes that a performer gets behind or inside and manipulates to move in a certain way or to look like something else--sometimes it’s a face or figure, sometimes it’s an animal, and sometimes it’s just a huge amorphous blob that moves in the simplest way to create something recognizable. These shape-shifting figures are visually unique and can range from funny to sad to poignant all with the smallest movements. They are even sometimes interactive.

The performers being all clad in black, they almost always blend into the background, so all the audience sees is shapes floating in space. This has a dazzling effect during a particular scene in which jellyfish, giant squid, seahorses, coral, and other underwater creatures come to life. When the performers bodies are seen on stage, their faces are always hidden by something, a mask or some other device, such as a musical instrument. Here, the physicality of the performers, who sometimes engage in acrobatics, can be fully appreciated.

Mummenschanz has been around since 1972 and is showing no signs of stopping, even updating its act as evidenced by one scene featuring “electronic devices.” The troupe continues to do really special work and it’s always a delight to see what they come up with next.

Mummenschanz, Musicians of Silence – An Interview with Founder Floriana Frassetto

The performers were silent, but the audience buzzed with the whispers of children at the Skirball Center Thursday night. What’s that? Is he a slinky? It’s a fish! A cat! They were all right. Mummenshanz, the Swiss mask-theater group made famous during their Broadway run from 1977-1980, presents a larger than life puppet-like show this weekend at the Skirball Center. I phone-chatted with Floriana Frassetto, the troupe’s co-founding member who was enjoying some Chinatown dim sum before opening night. I’m curious about the name Mummenshanz, does it have anything to do with the early English word mummer, which is a mime artist? First of all, Mummenshanz has practically nothing to do with mime. See because mime is… do you remember Marcel Marceau? That is mime. When you are performing gestures with your grimaces, with your faces, gestures with your hands, that is mime — simulating an object which isn’t there. We wanted to break away from mime because we had too much respect for Marcel Marceau. We decided to try our own adventure. So how did you decide on the name Mummenshanz? This was 1972. We were at an exhibit of the Bauhaus because we’ve always been interested in classic art—that’s re …Read more