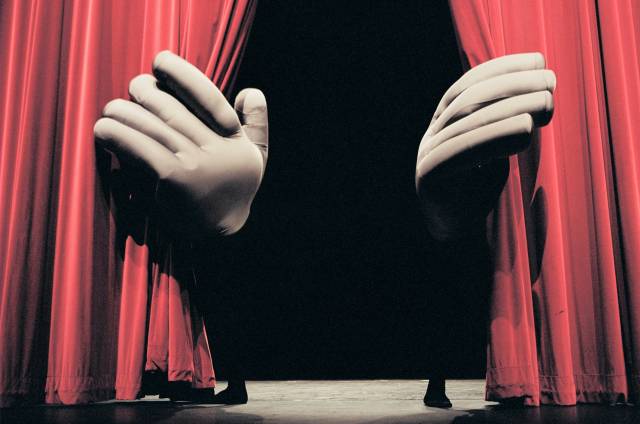 The performers were silent, but the audience buzzed with the whispers of children at the Skirball Center Thursday night. What’s that? Is he a slinky? It’s a fish! A cat!

They were all right. Mummenshanz, the Swiss mask-theater group made famous during their Broadway run from 1977-1980, presents a larger than life puppet-like show this weekend at the Skirball Center. I phone-chatted with Floriana Frassetto, the troupe’s co-founding member who was enjoying some Chinatown dim sum before opening night.

I’m curious about the name Mummenshanz, does it have anything to do with the early English word mummer, which is a mime artist? 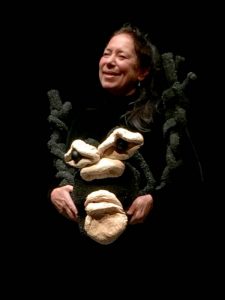 So how did you decide on the name Mummenshanz?

This was 1972. We were at an exhibit of the Bauhaus because we’ve always been interested in classic art—that’s really always been our passion. You know, hiking mountains, going to the museum when we could afford it -- of course now, we can, but maybe we don’t have time, but anyway -- we were very inspired by an artist by the name of Oskar Schlemmer. He did a ballet which was called the Triadic Ballet which was a dancer who wasn’t really dancing in a traditional way. It had wooden extensions from the arms and from the knees — it was more of a human architecture in space. And some of his experiments were called mummenshanz. Mummen coming from the word to mimitize yourself, to cover yourself, and shanz from the French word de chance which means luck. So it meant the luck of covering yourself. And we figured… yeah. We identified with this name even though it sounds like a stomachache — you know we found it interesting and we could feel ourselves being called Mummenshanz.

Well we started touring the US and we had great success. A couple of years later we came back and started a Broadway run that was very unexpectedly a great success and we stayed on three years which of course we never ever would have thought. And so New York has become a very special place for us. New York is the melting pot of so many cultures. To see them with Mummenshanz, to feel them with Mummenshanz… how they let the child go. The child which has no yellow skin, which has no… you know… whatever the color of the skin might be, that one child in all of us. It’s so beautiful, it’s so strong. It’s so powerful… what can I say? I don’t want to say that New York is my favorite city, but it definitely is in a way with the audience being so special.

Actually, I was hoping to ask you a bit about New York today. I’m sure you’re busy getting the show prepared but do you have any free time in the city? And if so are there certain places you try to go to when you’re here?

Well right now I’m sitting in front of some dim sum in Chinatown. I came down to buy some paint and I saw that Canal Paints has closed down. It’s incredible. This is the one side of New York I hate — the gentrification. They’re pushing out the artists. They’re taking away all the shops that were so fun to find materials in. What can I say?

Right, it’s happening in a lot of neighborhoods.

Anyway, can I take another bite of my dim sum now? You talk a little now. (laughs) 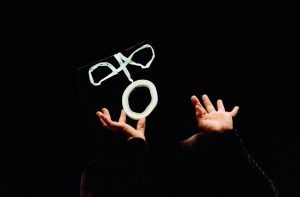 Absolutely. Well… I can tell you a bit about myself while you’re eating. I am a writer, of course, but I am also a choreographer and dancer with a particular interest in the place where dance meets theater...

Very good, we have a dancer in the company who is also a great choreographer. He recently made a show about Frida Kahlo. I wish there was a way it could be seen in North America, and what better place to start than New York?

In line with what you do, dance is a non-verbal performing art. But with dance, we almost always have music backing us up. With Mummenshanz, was there ever a time when you considered using music or verbal communication, or has it always been a silent show?

You know, our music is your reactions. You are our musical conductors! So we have to tune in to your emotions, to how you feel, to your moods, to your capacity of letting go. I think it’s so much stronger to tune in to you guys than to have music. [With music] it would be really repetitive and boring somehow. Each time it’s always a touch different, you know? Because your rhythm is a touch different from the one of yesterday.

That’s so true. It makes your show unique. So, Floriana, you are the only founding member of Mummenshanz who has remained with the troupe since 1972. Do you still perform in the shows?

Absolutely. I still enjoy it very much.

Great. Well, is there anything else you want New Yorkers to know before your performances at the Skirball Center?

That it’s good from age 6 to 106, and that I’m dying to feel welcomed back home.

In honor of Thanksgiving, let your imagination feast on this family-fun performance, playing through November 30th. Tickets range from $49-$85 and are on sale at www.MummenshanzNY.com or at 888-611-8183.

Through November 30 at the Skirball Center.

Review of Mummenschanz’s “You & Me”

The sounds of silence are beautiful in a spectacular new show by the playful team of Swiss puppeteers known as Mummenschanz. The wordless You & Me was created by Mummenschanz co-founder and Artistic Director Floriana Frassetto and features a strong ensemble (who are nearly always invisible to the audience) including Christa Barrett, Kevin Blaser, Sara Francesca Hermann, and Oliver Pfulg. Playing at the Gerald W. Lynch Theater at John Jay College, Mummenschanz will delight audiences of all ages. Using a wide array of materials in various shapes, sizes, and colors, the troupe uses clever movement and lighting to create poetic images that “tell a story” in short vignettes, all without uttering a word. The “puppets” are often simple shapes that a performer gets behind or inside and manipulates to move in a certain way or to look like something else–sometimes it’s a face or figure, sometimes it’s an animal, and sometimes it’s just a huge amorphous blob that moves in the simplest way to create something recognizable. These shape-shifting figures are visually unique and can range from funny to sad to poignant all with the smallest movements. They are even sometimes interactive. The p …Read more

Eve Jacobs is a dancer and award-winning choreographer. She received her BFA from The Juilliard School.