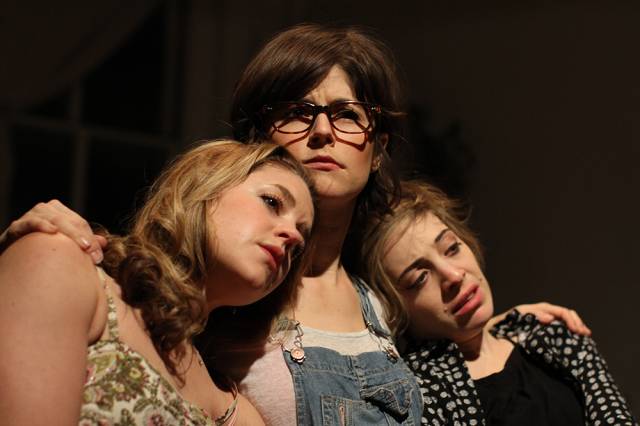 Currently on stage at the intimate Access Theater in SoHo is What We Know, a contemporary American retelling of Chekhov's play Three Sisters. The tale focuses on three sisters, all raised in "The City," now forced to reside in the family's country home located in a small town economically reliant on its nearby army base.

The creaky old house plays host to a endless parade of family and friends, starting with preparations for the birthday party of the youngest sister, cheery, rosy cheeked Irina, played by Sara Dobrinich. As the party decorations come out and shots are poured, the character of each sister starts to unfold: Olga (Jennifer Allcott), the oldest, an unmarried schoolteacher who's a little too quick to turn to alcohol; Masha (Yvonne Cone), unhappily married and full of anger, which comes out in the form of biting sarcasm; and Irina, the baby, struggling to find a way to set herself apart. There's also their brother Andy, played by the director of the show, Matthew MacNelly, the family prodigy who chooses to rebel in the only way he can think of, by marrying a girl, Natasha (Jennifer Martina), whom none of the sisters like.

Even with this American update, the play stays distinctively Chekhovian in flavor, with a bunch of over-educated dilettantes circling around and around each other speaking in grandiose monologues that the others rarely even bother to hear. It's a play about the frustration that comes as the years tick by and we, as humans, desperately try to understand what may give us some greater sense of purpose, belonging, and happiness. The sisters, left to while away the hours in a tiny town, longing for the city but never getting up the courage to move back, explore relationships and love as a way of understanding and combatting their confusion and boredom.

Masha tramples over the feelings of her older, dorky schoolmaster husband, Ted (Eric Chase) in her drive for passionate, all consuming love for married Major Alex, played in equally smarmy and endearing parts by Michael Moreno. Irina wonders if she should finally submit to the undying affection of Nick, the sweet, hopeful, and somewhat lost young man played affectionately by Kelsey Kurz. Olga mourns the love she never had, devoting her life to teaching. Dr. Roman (Robert Davenport) one of the most interesting and heartbreaking characters of the evening, slinks into old age mourning the unfulfilled and possibly unrequited love of the girl's deceased mother. 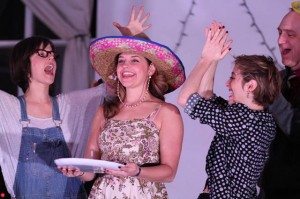 Social media factors quite quite heavily in this revamp, and while it's impossible to know exactly Chekhov would have had to say about twitter, Instagram, etc, I'd hazard a guess that he would be skeptical at best. The idea of 'tweeting into the void' becomes a rather poignant metaphor to discuss the purpose or purposelessness we feel interchangeably throughout our lives.

The stage at Access, which looks more like an extra large living room, is beautiful, but also very large, which at times left the choreography to fall flat. Occasionally the awkwardness worked -- hey, parties can be awkward -- but other times the actors seemed to be lurking in the background, arms by their sides, just waiting for their turn to speak. This is especially noticeable in contrast with the far more deliberately choreographed scenes. The play, penned collaboratively by the nine cast members, takes a lot of risks, some of which work, and some of which don't. Suddenly, for example, there will be a moment of surrealism like a spotlighted monologue or a character using pantomime instead of an actual prop, then other times a real prop comes out, or the spotlight never reappears. The characters break out into song during certain breaks, through known (Cosby, Stills, and Nash's "Our House") or original songs ("Burn," written by Jennifer Allcott), which weave into narrative moments of the plot, and this seems experimental enough without all of the other pieces thrown tentatively into the mix.

What We Know is a work in progress, but with its great heart and great talent, it's one with huge potential and a no doubt exciting future.

What We Know runs at Access Theater December 4th through the 20th.