June 18, 2014
Theater Review
Review: Mahogany Brown and the Case of the Disappearing Kid 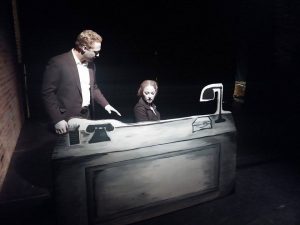 This past Saturday in the midst of Brooklyn's hottest mixed media festival, a different type of festival was taking place in Williamsburg at the Brick Theater. In full swing, The Comic Book Theater Festival continued to rave on with a new show for graphic novel lover: "Mahogany Brown and the Case of the Disappearing Kid".

Playwright Gina Femia, a Brooklyn native, brings a touch of noir to the Brick Theater with her play.  Detective Mahogany Brown storms The City as she searches for Jimmy Jones’ lost kid. While searching for clues that may lead her to the “Nameless” (the people responsible for the kidnapping), Mahogany ends up revealing more about herself than she can handle. Stage actress Melissa Roth portrays the titular Mahogany Brown, and does a wonderful job invoking the sultry, yet sharp attitude of the atypical noir detective trope. Femia notes that the personalities of the cast members influenced their character portrayals, particularly in the case of Sarah Goosmann, whose effervescence and innocence exemplified the idyllic Sunshine perfectly.  Finally, Jacob Saxton, playing the saddened, yet hopeful father, Jimmy Jones, brings so much depth to the role that his performance, including the scenes he’s not in, dominates the second half.

The slight dystopian theme, the noir style, and the elements of secret societies all reminded me of two different pieces of my childhood literature: "The Giver", and the "Sin City" comic series. Gina Femia has captured the essence of both pieces in Mahogany Brown, essentially sending Miho to rescue Jonas from the perils of “Sameness/The Nameless”.

All in all, Mahogany Brown has its flaws, as any new production is bound to; but Femia’s use of storytelling, syntax, and imagery more than make up for any technicalities in performance. Catch the remaining two shows tonight at the Brick Theater at 7 p.m., or Friday, 6/20 at 9:00.