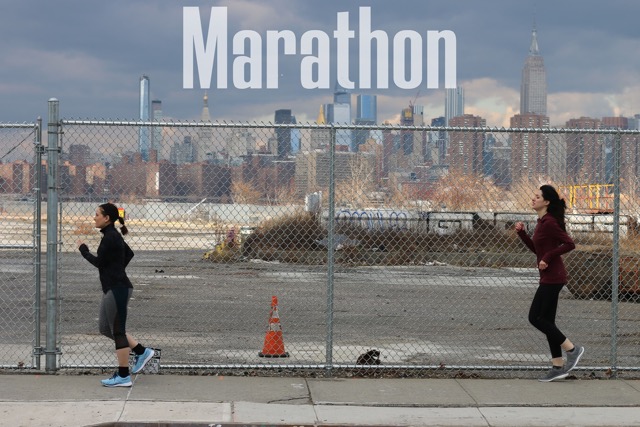 Sometimes the smallest venues/shows/casts pack the biggest punch. This was the case on Wednesday, January 15th at Dixon Place with the one-night-only performance of Marathon, a one-act play beautifully acted by Chiara Cimmino and Kimberly DiPersia and sensitively and insightfully directed by Valerio Vittorio Garaffa. Ms. Cimmino and Mr. Garaffa are an artistic Italian couple who live part time in New York as well as in their native Rome.

The story is of two friends with very different temperaments who are training for the New York marathon. We go along with them on their evening run during which much is revealed about their lives, their ambitions and their relationship. And when I say run, run they do, practically the entire hour they are on stage. And it is a tribute to both actresses’ equal ability to deliver comedy and drama, to make us care about what they are doing and where their lives are going that we don’t spend the entire length of the play thinking, “My god, how can they be running AND talking for all this time??!!”

Mr. Valerio’s direction allows us to become intimate with these women. His built-in silences are not only realistic to runners’ behavior, but they allow these talented actresses to reveal so much of the inner lives of the characters. This play is funny, poignant and engaging. I sincerely hope this talented team will bring the piece back as it very much deserves to be seen by a wider audience.

Kate Konigisor is a NYC based actor and director with extensive credits in both NYC and regionally. She is the founder and Artistic Director of the Killington Shakespeare Retreat and Shakespeare with Benefits. A proud member of Actors Equity and SAG/AFTRA.

Review: ‘The Legend of the Waitress and the ...
Review: The Unsinkable Molly Brown
Review: The Listening Room
Review: Passageways: Songs of Connection, Abnormal...