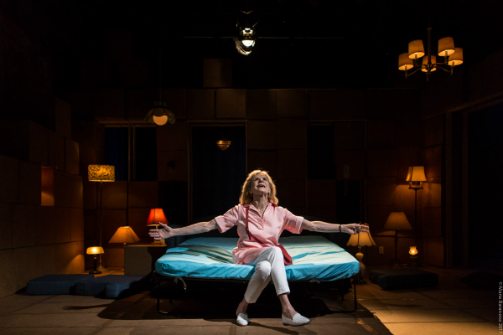 “One hour in the company of a 12-year-old these days makes you realize just how little you know about the world you live in.”

While any parent of a pre-teen would surely be quick to agree with this statement, no one knows the sentiment better than the central characters of The Mother of Invention, the new James Lecesne work produced by Abington Theatre Company and directed by Tony Speciale. It's a prominent theme that plants itself at the top of the show and hovers over the unfolding action. Indeed, on the surface, the multi-layered play deals with death, dementia, and the destruction it causes, but it also presents the ideas of living and loving life, indulging in the little things, and — most importantly — staying present. You just have to know where to look.

The plot follows the titular mother, Dottie, suffering from Alzheimer's, and her son and daughter, Leanne and David, both with personal baggage of their own, as they clean out Dottie's Florida home following her admission into an assisted living facility in Tucson. As they get further into their search, secrets are revealed, tensions run high, and a mysterious stranger, Frankie Rey (the smoldering Dan Domingues) with a surprising connection to their mother arrives to shake things up further. It’s a lot to deal with at once, and Leanne’s first instinct is to shield her own daughter, Ryder (the always captivating Isabella Russo), from the chaos. What they fail to realize is that the intuitive young bookworm not only knows the full details of all the goings-on, but knows it better than anyone else in the family. It’s no coincidence the topics she’s so knowledgeable about — the bald eagle becoming threatened, the hawk snatching up its prey, the chickens secreting stress hormones that intoxicate the environment — directly correspond to the various circumstances of each family member. Yet, she's stifled from sharing that knowledge outright, consistently shoved in the background during adult conversations because, at 12, “she’s too young and wouldn’t understand.”

On the other side of the spectrum, there’s Dottie (the incomparable Concetta Tomei), who, despite her condition, continues to assert her considerable amount of knowledge about her own life and family, weaving in and out of each scene in the house, providing topical commentary that lets us know she’s still “with it.” Lecesne couples these remarks with equally complex monologues, in which Dottie offers poignant observations of the world at large. (“I’m not contained by mere details. I’m suddenly free of all that. I’m a person without a story” and “Someone somewhere once said memory is the stuff we think we forget” are among the gems.) She also makes clear she has a pretty perfect understanding of her son, who is struggling to connect with his inner child. And yet, she’s dismissed due to her condition — the adults think they can manipulate her because she doesn’t know any better.

It’s a bit unfair, especially because it’s not like the adults have it figured out perfectly themselves. The terrorist-obsessed neighbor Judy (an enjoyable Dale Soules), hell-bent on protecting the family from danger, ultimately causes more harm than help; Leanne (a moving Angela Reed), reeling from her mother’s eventual disappearance, mistakenly turns to Frankie for comfort (of which Dottie notes, “I know that would not have been a right thing to do”), and Frankie offers a tale of hope that leads the family into irreversible trouble. But, in the end, it’s David (James Davis) who is most affected. Already established as someone based in reality — he’s a writer, who left his job in fantastical children’s literature to take up the more complex adult novella — his inability to face his imagination is brought to the forefront when he comes face-to-face with fantastical Frankie Rey (who embraces his imagination) and literally cannot hold his own.

All rough material for sure, but it’s no matter, as the top-notch cast is so captivating, the moment the lights come up, you’ll forget you’re watching a down-and-out family gradually spiral out of control. Fresh off a star turn in School of Rock, Russo simply couldn’t be more delightful as young Ryder; Davis and Reed both have you hooked for the entire span of their emotional journey, compelling you to laugh, cry, get angry and empathize with them as they fight for their mother’s sanity; Domingues and OITNB’s Soules have a firm grasp on the more comic bits of the play; and Tomei, in a league of her own, offers a powerful performance that truly illuminates a mother’s internal — and external — struggle to survive.

To take it back to the theme at hand, scenic designer Jo Winiarski cleverly incorporates cardboard moving boxes within the walls of her set — gradually removed as the piece progresses and symptoms exacerbate. We won’t even get into sound designer Christian Frederickson's chillingly effective decision to play “I’ve Got No Strings” during pre-show, eerily foreshadowing the freedom this family yearns for and, much like Pinocchio, the consequences they face when they receive it.

But while it does forewarn the repercussions of true independence, the complex piece also urges its audience to live in the present moment (and not completely shut out your imagination) and embrace life for what it is. Those who don’t may not necessarily be doing the right thing for themselves, and those who do can change their life…and yours, if only you “look hard enough to see [it].”

Review: The Dork Knight
Review of ‘Golden Shield’
Review: Prayer for the French Republic
Review of ‘The True’