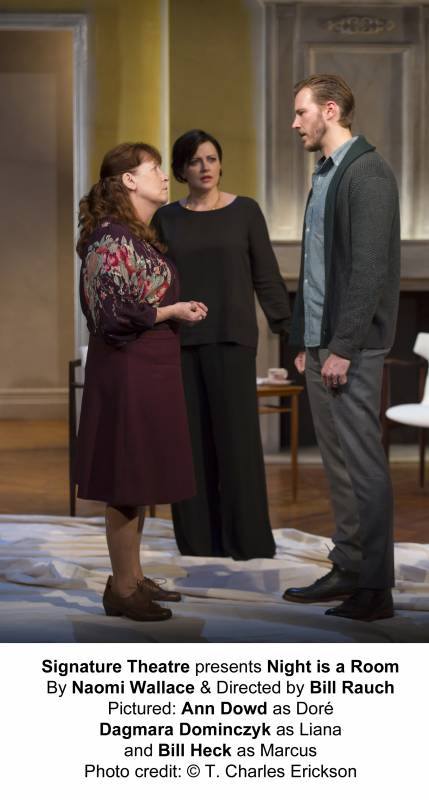 Naomi Wallace's Night Is A Room, now onstage at the Signature Theater, begins with two women talking about balloons, and ends with the same two women discussing feet. In the two hours that pass between this careful mundanity, both of their lives change suddenly and immeasurably.

Lianna, played by Dagmara Dominczyk, is a successful, attractive, intelligent advertising executive. She is a self-proclaimed "conductor," not just in her high-powered job, but of her own shining personal life and the lives of those around her. She and her husband, Marcus, have been married for over two decades and are still deeply and physically in love. They have a daughter off at art school in the States, a nice house, and jobs at which they excel; their lives are enviable by anyone's standards.

Now, in one of her most brilliant moves yet, Lianna has solved the problem of the only missing piece in their full and happy existence; she's orchestrated a meeting between Marcus and his biological mother, Doré (Ann Dowd), as a surprise for his 40th birthday. The overweening, breakneck enthusiasm of Lianna's advance man posturing (I’ve brought all kinds of balloons, she insists) and invasion of Doré's simple and solitary life forces audiences into a wary, foreboding discomfort, but Lianna sees nothing amiss. In fact, she's positive all parties will soon enough be thanking her for the joy she's brought to their lives.

Truthfully, there isn't too much more that can be revealed about Wallace's current piece at the Pershing Square Signature Center without doing a great disservice to the play's incisive, gut-wrenching intensity and the shocking revelation around which the play revolves. But without revealing detail, it is safe to say that the emotional reaction Wallace is capable of extracting from her audience is phenomenal. From gasps to sighs, she even draws out a veritable symphony by way of laughter alone -- perhaps I had a particularly rowdy audience, but I heard more kinds of laughter in the span of two hours than I thought possible, from relieved to uproarious to over-the-top uncomfortable.

Dowd and Dominczyk are fearless and ferocious in their full-bodied commitment to Wallace’s characters. As Marcus, Bill Heck is talented, and indeed off-puttingly handsome, but he is by the same token both absolutely critical and completely incidental to the way in which the women's lives intertwine. Scenic design by Rachel Hauck and sound design by Leah Gelpe both temper and supplement the play's thematic concerns. Though the play never deviates from reality, the sickening gravitas of the play’s twists feel impossible. The set moves gracefully and fluidly from Doré's sparse patio that sets the stage for the first act into Marcus and Lianna's grand living room in the midst of redecoration, but the stage lights and rigging remain exposed along both sides, a reminder of the stagecraft and a welcomed gasp of distancing air.