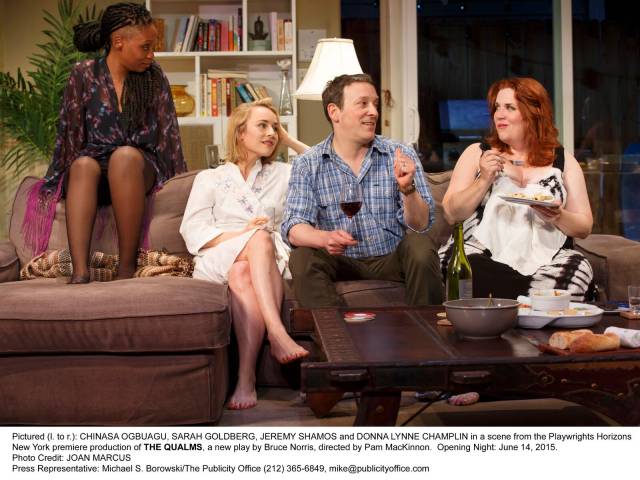 Audiences have the opportunity to become voyeurs at The Qualms, an uproarious one-act comedy at Playwrights Horizons. Written by Bruce Norris, author of the Tony, Olivier, and Pulitzer Prize winning Clybourne Park, The Qualms is a compelling, thought-provoking, and hilarious peek into the titillating world of swinging.

Set in a tastefully decorated beachside condo, the play begins with two couples sitting on a sofa drinking wine. The tension levels of the foursome could not be more different. Gary (John Procaccino) and Teri (Kate Arrington), the hosts, are barefoot and comfortable in their own home. Chris (Jeremy Shamos) and Kristy (Sarah Goldberg) are the newbies and they seem nervous, especially Kristy, who nearly jumps out of her skin at the slightest touch from Gary. Chris is clearly the initiator of this experiment and tries to go along with Teri’s advances. But you can tell he has no idea how this is supposed to work.

The old-timers are friendly toward the new kids right off the bat. They are clearly excited to add a new, attractive couple to their group. Kristy, following a relaxing massage from Teri, tries to be more open to the situation. Chris, however, cannot stop obsessing over the wine he brought that no one is drinking. At the same time, Roger decides to test Chris, whose deeply nested insecurity is triggered and who spends the rest of the play spiraling downward. What ensues is a swinger party with more than one climax but no orgasms. Whatever harmless sexual tension exists quickly devolves into a stand-off between Chris and his manhood.

Directed by Tony Award-winning Pam MacKinnon, The Qualms’ dialogue flows freely in a naturalistic way. You feel as though you are in a comfortable home, hanging out with some new people and listening to their views on sex, politics, and monogamy. The humor is almost constant and even amidst the buildup of tension a welcome reprieve in the form of a clueless delivery guy (Julian Leong) resets the tone. The set (Todd Rosenthal) and lighting (Russell H. Champa) are warm and inviting. The costumes (Jessica Pabst) run from conservative to seductive, highlighting the difference between the swingers’ day and night personas.

The Qualms may not make you question your own views on monogamy, but it certainly makes a compelling case either way. As Teri would say, we are all sexual animals and we should stop pretending we are not.