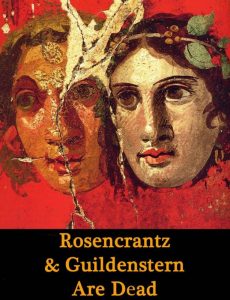 Tom Stoppard’s Rosencrantz And Guildenstern Are Dead is not a play made easily digestible. Much like the play upon which it’s based, it’s incredibly wordy, often esoteric, and full of heady philosophical themes of mortality. In this production of the meta-drama playing at the Gene Frankel Theatre, the nascent Onomatopoeia Theatre Company hits the nail on the head by casting two very strong leads to play the doomed titular characters, Rosencrantz (Miranda Jean Larson) and Guildenstern (Jocelyn Vammer), from Shakespeare’s Hamlet. They gamely carry the play through some impressive linguistic gymnastics and accomplish the difficult task of making the audience sympathize with two minor Shakespearean characters.

Stoppard’s take on Rosencrantz and Guildenstern is fascinating; he imagines what happens to them outside the parameters of the main text of Hamlet, incorporating actual scenes from the source material to provide context and a sort of play-within-a-play-within-a-play. All we really know for sure about Rosencrantz and Guildenstern is that they show up for one scene as close friends of Hamlet, and are pronounced dead at the end of the tragedy. The reality, according to Stoppard, turns out to be a succession of existentialist dilly-dallying. They flip coins, they wait for “someone” to tell them what to do, and then try to remember what they were actually told and who they really are. They also encounter a troupe of tragedians, led by the main player (Thomas R. Gordon, who also directs), which sets them on the trajectory that eventually leads them to their deaths.

Make no mistake, despite the heavy subject matter, there is plenty to chuckle at. The comic relief is often found in the players’ antics. Yes, there is Hamlet (Gregory Pike) brooding while Ophelia (Morgane) cries in response to his mercurial treatment. Sure, Gertrude (Tracilyn Jones) and Claudius (Jonathan West) are as icily regal as ever (and smoking hot in the play-within-the-play, The Murder of Gonzago). But there is also a bit of slapstick, mainly in the character of Alfred (David Meyers, also doubling as the ridiculous Polonius), who can never quite get his cues correct. I particularly enjoyed the players’ loose interpretation of the script to ad-lib sarcastic lines under their breath.

Rosencrantz and Guildenstern are seen as lost souls, destined to do nothing without a catalyst. But they have found a kind of relief in being told what to do. When they realize their inevitable fate and their futility to thwart it, their despair is heartbreaking. Yet the awareness of not being the drivers of their own destiny is something of a catharsis.