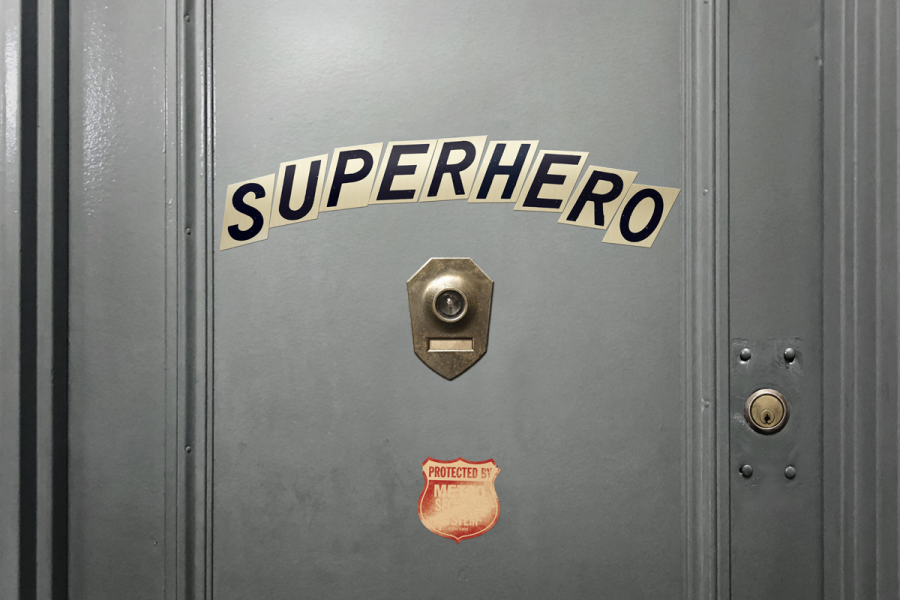 “We don’t need another hero,” sang Tina Turner. Well, maybe we don’t really need another musical about superheroes either. The short-lived Off-Broadway musical “Superhero,” with book by John Logan, and music and lyrics by Tom Kitt, begins well, but unfortunately doesn’t maintain its creativity.

Wearing a distinctive red-hooded sweatshirt, Simon (talented Kyle McArthur) plays a teenager who had been in an accident with his father two years earlier. Simon survived but his father died. In an attempt to move forward, his mother Charlotte ( Kate Burton) sells their house and uproots him.  As Simon tries to adjust to a new school, he finds solace in comic books, an obsession that he had shared with his dad.

As Simon sings a song about his comic book characters, chalk illustrations of the hero and the villain are flashed across the stage. In the next number, his mother, an English professor who is trying to find her own way, sadly sings of how difficult it is connecting with her son who won’t share with her. During the song, several cast members, all in red hoodies, flit throughout the stage depicting Simon’s elusiveness.

Simon has suspicions about Jim, the shy guy living in their building (Bryce Pinkham) and instructs his mother to flirt with him. (Spoiler alert -that reclusive guy in apartment 4B really isa superhero! )  Sadly, we learn from Jim that being a superhero isn’t as exciting as it is cracked up to be because you can’t save everyone and you can never have your own life. On two occasions Jim is interrupted from his own activities by distant voices screaming for help.

The first act plays well. The show begins with a great deal of promise but somehow never fulfills it.  Either the show wasn’t fully developed or it was rushed because there’s no real story arc to “Superhero.”  By the end, the show just seems to stop. Once again, Charlotte sings to Simon that she’s will be there for him; in fact, she will be his superhero and, yet, inexplicably, this time it moves the teenager. Sadly, for the viewer it’s not satisfying enough because nothing has significantly changed over the course of the two hours. With the character of Jim, a real alien, committed to saving people, “Superhero” was on the brink of offering something new and creative but then went no further.

One reason I wanted to see the show is that I am a fan of Tom Kitt (winner of countless awards for “Next to Normal).  Some of the early music in “Superhero” is fine, especially the song that Charlotte sings about now only doing “laundry for two.”   Yet by Act 2, it seems as if the last three or four songs are all about superheroes and feel repetitive.

Superheroes do more than fly; sometimes their special power is singing and acting. Despite weaknesses in the show, Kate Burton is wonderful and her voice is thrilling.  Pinkham is always a delight. Although his role is not quirky enough (he’s great at quirky) he is in fine voice.  Kyle McArthur makes a terrific professional debut in Superhero.

Actually, Turner didn’t get it right.  We could always use another hero-in fact, we will always NEED lots of heroes, in politics, in our daily lives and on the stage. After all, we can’t make it all alone.