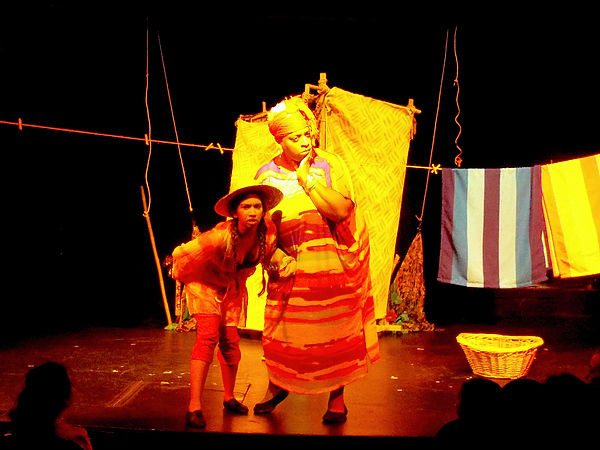 The 13th Street Repertory Theater is as well known for hosting provocative theatre during the week as it is for lively shows for children on the weekends. Yaki Yim Bamboo keeps to this tradition and is a show especially for younger children, toddlers through about age 7 or 8. Yaki Yim Bamboo is the brainchild of Fred Rohan-Vargas who first wrote the story as a children’s play with some songs and has now transformed it into a full-fledged musical with the help of June Rachelson-Ospa and Jay Griggs.

Akin to the general theme of Peter Pan, Yaki Yim Bamboo is the name of a magical island where Caribbean children can go to play and sing without being harassed by grownups. The principle character, Bobotwee, is first presented as a villain, the evil Grand Master of the island set on hunting down the children, but we come to learn that he is but a child himself, fearfully approaching the precipice of adulthood. His insecurity about growing up twists him into an angry vigilante, eager to expel the children and boil his disobedient animal servants in a soup.

From the anthropomorphic mongoose and iguana, to the bright costumes, and witty banter, the show has no trouble keeping the interest of the children in the audience. It goes a step further, however, and invites volunteers to assist in the production as animal characters. There are other moments of audience participation sprinkled throughout and the show ends with a limbo line for all the children. 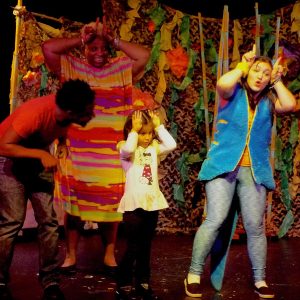 Using song, dance, and story elements, Yaki Yim Bamboo aims to portray daily aspects of Caribbean culture. There is the ritual socializing (“liming”) while doing the washing, the corn meal and iguana soup dishes, and the terrifying specter of a hurricane. And of course, there is the music. The various songs subtly invoke a diversity of Caribbean styles including calypso, reggae, and soca.

While the actors all performed ably, it seems a missed opportunity that there were no authentic Caribbean accents among the cast. Although exaggerated manner is expected in a children’s show, the caricatured dialects quickly wear out their welcome for the adults. The story itself is somewhat hard to follow and isn’t conspicuously derived from any island mythology or folklore and this, too, seems like a missed opportunity to celebrate Caribbean traditions.

Although my four-year-old daughter couldn’t recount the main conflict or other plot elements, this did not impede her enjoyment, as I’m sure it didn’t for any of the other children present. When questions were posed to the children in the audience, answers were shouted back without a moment’s hesitation. Most importantly for any musical, the songs in Yaki Yim Bamboo are delightful and there were moments when I’m sure every toe in the house was tapping.