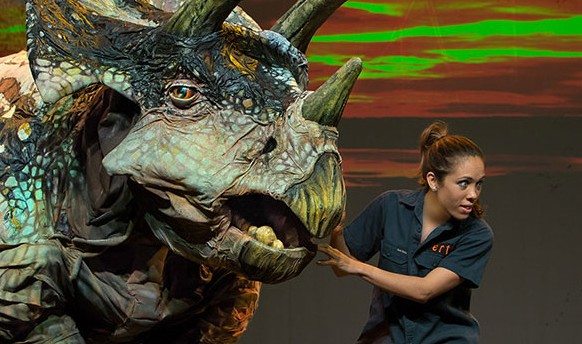 Australia's Erth Visual & Physical Company comes to New York February 4th and 5th to perform four performances of Dinosaur Zoo Live!, an interactive theatrical event for kids. We spoke with puppeteer Miron Gusso to find out more about the show.

What inspired the show, this idea of having lifelike dinosaurs as a "meet the animals" kind of zoo attraction?

Erth (Environmentally Recycled Theater) was commissioned over 10 years ago to build a dinosaur puppet for a Natural History Museum in Canada. This snowballed into many Museums around the world, requesting these amazingly engineered and operated dinosaur puppets. Shortly after the quick demands and a huge inventory of dinosaur puppets, Artistic Director of Erth, Scott Wright and the company began to develop a theatrical experience empowering children, while educating them on the dinosaurs that once roamed in their backyards.

Would you say this is more the style of a drama or a documentary, in terms of how the characters on stage interact with each other and the audience?

The show is presented in a narrated fashion where the host, Miles Portek directly addresses the audience and takes them on a prehistoric adventure. I guess it does have a documentary vibe to it. During the presentation of these animals, the hosts' assistants or "dinosaur wranglers" bring on and operate these dinosaur puppets.

The show is interactive, but how much so? Are kids always or mostly in their seats?

We rely heavily on our audience. Each show is different, depending on the kids and families that interact on stage. All of our dinosaurs require lots of attention and care. Miles will always select a few kids to participate in aid of our prehistoric creatures.

Does this show cover the concept of extinction in any way, or are we whisked away into a fantasy world with dinosaurs in our midst?

Our main goal is to display as many facts as possible. Miles, charmingly admits right away we are a puppet show and to not be discouraged as our puppets are incredible and kids all love dinosaurs. As we may mention a theory or two, the primary focus is to introduce our audience to their favorite dinosaurs, at the same time introducing them to some new ones. 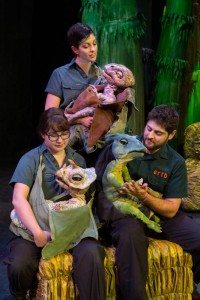 Do many children become too frightened of the dinosaur puppets? Surely there must be some that do.

Terrified. Absolutely terrified. However, the mood right of the bat is fun, casual, funny and exciting. This is where the empowerment of the child blossoms and they overcome their fear while still watching and being captivated to what they know is just a well made puppet.

Scientists can be prickly about the public presentation of accurate science. Have you had any paleontologists nagging you about technical details like feathers and so forth? How accurate and up to date is the science behind your show?

Since being hired first by a museum, the goal was always a detailed focus on modern paleo research. Erth has always had a close relationship with local Natural History Museums. Steve Howarth, head of design, leads an incredible team of tenacious designers that engineer and design what scientists think dinosaurs would look like today. For example, T Rex's where thought to stand in a 45 degree pose, with the tail dragging on the ground as they walked. In fact, there has never been a fossil of a dragging tail between two footprints, which it would have if it walked this way. Paleontologists believe, T Rex's stood more birdlike, with the head and tail balancing the body. Our T Rex is designed exactly this way. In addition, it also has feathers, which scientists believe where a dominant feature of this animal. All of our creatures are scale to size, depending on their age.

Every city we visit, we try to contact their Natural History Museum. The entire cast and crew make these visits and explore regional and National research. It this this info that helps us keep dialogue with all the kids and families at our shows.

Do you think this show helps to get kids excited about science, nature, or both?

Most definitely. The format of the show is so interactive,fun and unpredictable, that the kids are more engaged and get more out of it. We encourage them, by also introducing facts about kids finding fossils and making a difference in History.

Did you have any ideas of things you wanted to do with the show but had to scale back for some reason?

Unfortunately, I can't speak for Erth and have no idea what they would or wouldn't scale back. I do know that the show was designed to travel, be super light & packed very tight.

Are there any other shows in this style that you would recommend to those who love your show?

I hope this show broadens people's understanding of puppetry and audience members continue to explore and see various styles of puppetry. Obviously big shows like Lion King, Shrek & Beauty and the Beast are great.

Are you working on any other creative projects like this?