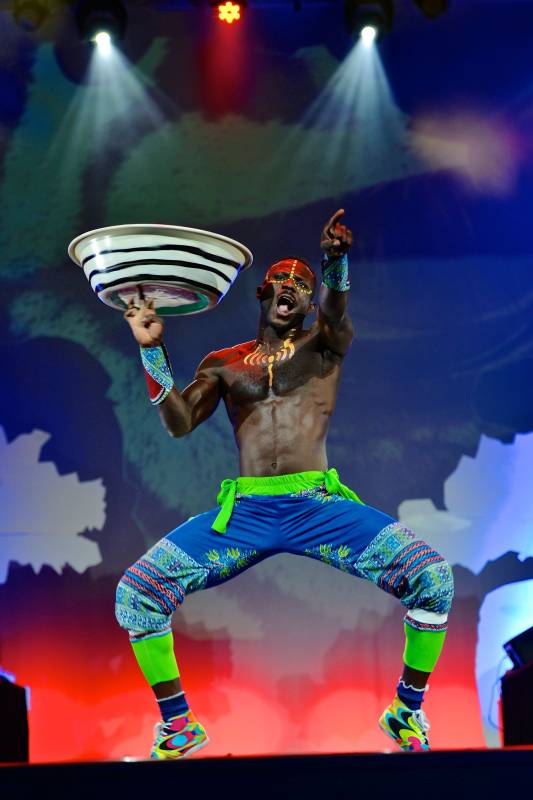 Holy cow, run, don’t walk, to the New Victory Theater on 42nd Street to see Mother Africa: My Home. This “circus spectacular” production has been brought back to New York by the Circus der Sinne group from South Africa and features performers from all over Africa.

Set on the streets of Cape Town, the incredible performances are punctuated by short songs, dance numbers, and vignettes that tell the daily stories of the bustle, humor, and hopeful positivity of urban South African life. This cheerful vibe is juxtaposed with alternating images in the backdrop that convey the complex reality of South Africa, towering high-rises and culinary abundance but also shantytowns and bleak urban poverty. This juxtaposition helps to drive home a simple theme: Above all else, Mother Africa is a celebration of the African virtues of resilience, heart, and optimism.

To be sure, Mother Africa is also a dazzling festival of physical performances. On display are acrobatic feats that easily rival those of Cirque du Soleil, but with far more soul. The costumes, set, and even the props are quite minimalistic, which only adds to the feeling of raw human talent on the stage. The juggling is mind-boggling, the Risley acts are astounding, and the balance acts culminate into games of can-you-top-this that strain credulity itself. Too many times, I found myself thinking, “There’s simply no way that s/he is doing that.”

The African music and dancing is delightful as well. In an era when orchestras are usually relegated to subterranean caverns, it is a refreshing change to see the band onstage and doubling as the backdrop of the performance. In fact, some of the singers and drummers are actively engaged in the narrative, which amplifies the city-street setting of the production. By the end, all of the various performers join in an over-the-top, audience-engaging song and dance number that will have every hand in the house clapping and every shoe tapping.

Mother Africa is perfect for children of all ages. My four- and six-year old were mesmerized and delighted the entire time. Arrive early! There are activities and a play room for kids to enjoy before the show and during intermission. There are also complimentary keyed lockers in the basement of the New Victory Theater, something I’ve never before seen at a theater and a welcome convenience for winter coat season.

My family and I saw this show on opening night and we all simply loved this amazing show. I cannot say enough great things about this show. Go see it. You and your kids will love it.