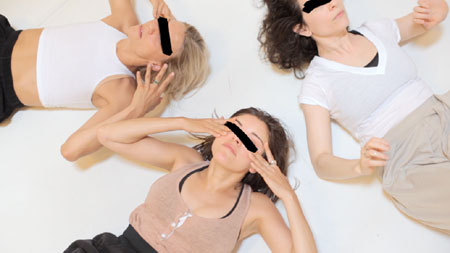 As the #metoo movement has made evident, recent years have witnessed not only the revelation of women’s long-buried truths but a new awareness of the systems which necessitate and uphold their silencing. Western society may trace this devaluing of female narrative back to the patriarchy of ancient Greece, from whose myths and culture our current civilization stems. Nowhere is this more evident than in the myth of the Trojan princess Cassandra, whose misunderstood prophecies epitomize our culture’s capacity to deny, question, or reduce female insight. Newly-formed physical theater group Virago Theater plumbs this tale’s modern implications in Gaslit, a devised piece exploring the outer and inner forces of female oppression and the ways by which we surpass them.

For those unfamiliar with the Cassandra story, a company member begins with a deliberately self-effacing  recap: as punishment for rejecting the god Apollo’s sexual advances, Cassandra was given the gift of prophecy but cursed that no one would believe her claims. More pointedly, she informs us, Apollo cast this curse by spitting in Cassandra’s mouth. These themes of violence and torment echo throughout as each woman confronts her own unasked-for knowledge, moving from physical struggle to halting articulation to inhabitation and ownership of the truths she bears.

Beginning in expressive dance, the ensemble cycles through poses of isolation, fear, rage, and oppression, mimicking bound captives, shrieking harpies, or anguished visionaries. The disturbing, vaguely sexual motifs of tied hands, gaping mouths, and the wiping of eyes physicalize inner turmoil: the women seek as much to unleash their stories as to purge themselves of them.

Gradually, the piece adopts a more narrative tone, as individual stories emerge from the collective. Each vignette explores the subject of “gaslighting,” a form of psychological manipulation through which victims are led to doubt themselves and question their own sanity. These scenes are by turns jarring, relatable, and darkly comic: a self-proclaimed wellness guru frantically details her morning routine; another woman spouts absurd conspiracies which, she notes, would be taken as fact had a famous male uttered them. Others recount childhood abuse and parental complicity, or embody women’s subtext as they confront their internalized judgement and shame. In a noteworthy group sequence, the actors perform runners’ exercises as they catalogue the social, vocational, and interpersonal hurdles women must transcend to access their truth. Armed with white chalk, the actors periodically scrawl the stage floor with the symptoms of gaslighting, underscoring the characters’ behavior and forming a literal foundation on which they stand.

Though Gaslit shows the self-perpetuating impact of cultural repression, it also suggests that we may overcome it. In the show’s last scene, a company member’s song of healing and autonomy morphs from personal reflection to wider affirmation. The remaining ensemble smears the chalk writings as they join in, inviting the audience to sing along in a final moment of solidarity. This simple act speaks to the crux of Gaslit: we, through awareness and support, can replace toxic narratives with newfound truth.

Gaslit is directed by Brenna Palughi and produced by Donna DeStefano. Presented by Virago Theater. Lighting Design is by Evan Anderson. Sound Design is by Chad Raines. Projection Design is by Sarah Lasley.

Played 7/8 at the Wild Project.

Review of ‘Forbidden’
Review of ‘This is Modern Art’
Review of ‘Judas’
Review: Great Performances Anchor the Female-Cente...