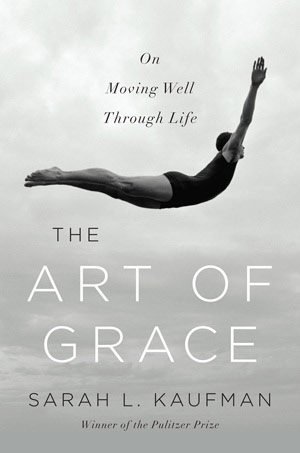 If the subject of Sarah L. Kaufman’s The Art of Grace sounds almost too subjective and ephemeral to capture, the book's success lies not only in how it defines grace, but how it contains it in such a way that we feel it’s a possibility within our reach. As the Dance Critic for The Washington Post, Kaufman has proved to be a keen observer of elegance and expression through the body, but what she proves in The Art of Grace is that it’s through her study of beauty through the corporeal, that she has been able to look at the soul with a new understanding. Kaufman’s book could have easily been turned into a handy guide on manners and etiquette, but rather than hand out advice, the author invites us to reexamine our place in what she describes as a “culture of coarseness”. The book becomes most powerful when Kaufman herself admits to contributing to a society which praises impatience and a lack of empathy; therefore, when she comes to the conclusion that “grace exists where we forget ourselves and aim instead to bring pleasure to others”, feels like an earth-shattering revelation.

Using examples that go from Beyoncé to Roger Federer, Kaufman weaves an entertaining account laden with moments of joy and introspection, aimed to help us better ourselves, without relying to self-aggrandizing. For a book that could have been filled with aphorisms, it’s a true pleasure to dive into Kaufman’s pithy prose knowing that she is taking that journey with us. As the book comes out in paperback, I spoke to the Pulitzer Prize-winning critic about the themes she explores, how they apply to our times, and how grace comes into play in her own profession.

Ever since I read the book I have been extremely self-conscious about how I conduct myself after reading the book, so I’m grateful you included a handy list of tips in the end. I’ve often found myself asking “what would Sarah do”...

Do people come up to you and ask if you think they’re graceful?

I get some of those questions when I’m speaking at a public event or a book talk. What I try to do in the book is give people an outline of what’s important, but there’s never one right way, or one kind of answer. It’s more about the idea of kindness, compassion and thinking about the other person, and I think those are ideas people are comfortable with. It’s nice to have a reminder, which is what I try to do in the book, to think about these better angels of our nature that can get forgotten in our busy world.

The book has also helped me navigate through the terrible election season. I seek grace in the debates and it comforts me to find it. It also made me think how in the book grace is often described as going through life’s challenges while being able to mask the effort. Considering how American culture seems to be focused on being able to show your sweat and struggle, in math they even say “show your work”, and in reality shows all we see is how people fight to “better themselves”. Were you concerned that Americans, in particular, would find the book like a condemnation?

I’m not condemning society, I’m pointing out some of the consequences of forgetting about grace and instead becoming numb to the sharp edges, which is what happens when we’re exposed over and over to roughness and the feeling that maybe people aren’t thinking about our feelings. There is also a sense of frustration that may come from feeling you’re not being understood or listened to. The sense of effortlessness was what held up in the Renaissance as the secret of grace, to convey a sense of effortless mastery. It’s important to make the distinction between effortless mastery and affectation, if you have an affectation and you want people to see how effortless we are, that undercuts it. In the effortlessness what is important is not how it makes you look, but that it promotes a sense of ease around him or her. In that way it’s a benefit, it helps take care of the people around us, if we can convey a sense of ease, calm, slowing down, rather than reacting with heat.

You put people at ease. She could’ve just expressed total embarrassment and self-criticism, “oh I can’t believe I did that”, she could’ve fumbled, and that would be understandable, but the way she handled it with a little bit of humor, but then moved on to accepting her award with graciousness was a way to put everybody at ease.

Something lovely about the book was that you highlight Margaret Thatcher’s grace, which was something that had never even occurred to me before, since I mostly think about her politics. Did you go through any personal debates in trying to find grace in figures others judge very harshly?

When we miniaturize someone, when we boil them down to one aspect, we’re no longer really paying attention. What was interesting to me about Margaret Thatcher was how she used grace for political means, it’s open to debate how authentic her self-presentation was, but it was clearly and cleverly designed to lubricate the acceptance of her policies and programs, that might not otherwise have been accepted by her fellow lawmakers and the public. The way she carried herself, softened so many aspects of herself, including her name - becoming Maggie instead of Margaret - those were all very effective ways to make herself more appealing, that’s why rather than create a book of predictable examples I wanted to really look at some cases of grace that were more surprising. With her, that was a very interesting discovery, when I looked closer at her tapes and saw how she spoke, her sense of humor, I was fascinated by how she employed polishing to help herself be successful in what she was trying to do. That’s something not as much appreciated now, but the view of a female politician is so complicated, one thing I do think Margaret Thatcher was very well, was presenting herself as a woman and reveling in her femininity, which was a disarming thing for a lot of people.

The book makes a perfect point about how grace is often associated with the feminine, I have heard queer men for example talk about how they were called “graceful” growing up - I include myself among them - as a code word for “not heterosexual”. Why do you think men tend to associate grace with a lack of “masculinity”?

Grace has been associated with women stemming from the three graces of ancient Greece, the fleshy, beautiful demi-goddesses whose purpose was to make things easier for people, for artists, lovers...they were always invoked by people who wanted ease, joy, abundance, love. Conduct books throughout the ages though were always meant for men, and grace was the ultimate characteristic you aspired to cultivate as a man. I guess that’s one reason why I chose Cary Grant as the guiding spirit, nowadays we associate grace with women, and yet I was drawn to the idea of the graceful man, and what a delicious notion that is. The graceful men in the book weren’t conscious choices, but I ended writing about many male athletes, celebrities, icons...and I would say most of my mail I get from men.

One of the most important pieces of knowledge in the book is when you point out that grace requires letting go of the need to be right. How would you say this comes into play in your profession as a dance critic where people expect you to pass binary judgments?

As a critic I have always tried to be careful of people’s feelings and respecting the art and the artist in the first place. I’ve never thought of myself as a cruel critic out to kill a production, but it’s true that having devoted more than 5 years to this investigation and exploration of grace, it has made me more mindful to make sure I’m writing from a position of sincerity and truth. I want to make sure I’m being absolutely scrupulous in conveying truth about the work, backing up my arguments, making sure everything I say is supported by a true aspect of the work itself. I also want the wisdom not to pile on, which might be entertaining to read, but doesn’t serve the art or the artist. I try to make sure that what I’m writing offers something that can be helpful.

The Art of Grace is now available in paperback. For more information click here.