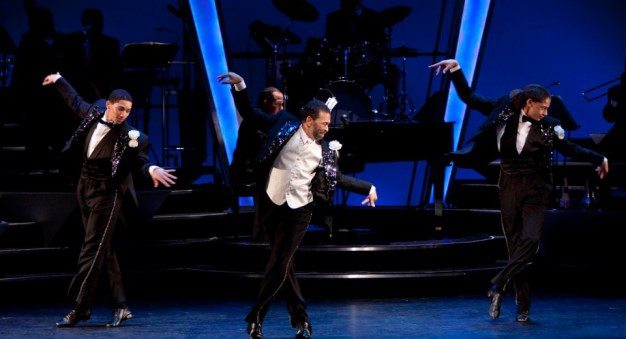 The stage opens on a set of stairs leading to a glittering, ladies-only jazz band. They launch into a mash-up of a few jazz standards, including "It Don’t Mean a Thing" and "Luck Be a Lady". The performance legend Maurice Hines appears onstage as though he’s always been there—all gleaming teeth and jazz hands.

Hines is an entertainer at heart, and Maurice Hines Tappin’ Thru Life is entertaining the whole way through. The evening takes us on a journey through his nearly 70 years in show business—a life story told in anecdotes stretching from the Apollo Theater and Joe Williams to the Playboy Club in Chicago and “Heeeeeere’s Johnny!” to singing and dancing on the Las Vegas strip for Ella and Sammy and Frank and Dean.

Throughout, Hines is a radiant presence onstage. His huge smile, expressive face, and cheeky taps do more than connect with the audience, they bring the audience to life, inviting laughter, call and response, and nostalgic sighs. The whole evening glows with reminiscence; Hines’ family photos, classic songs, and “old soft-shoe” throw back to the 1950s and 60s, when he and his brother, the late Gregory Hines, were growing up onstage.

Of course the night is not all black and white photos, Lena Horne tributes, and references to Victrolas. The show incorporates sassy one-liners, playful dance-offs, and a sizzling performance of Caravan, complete with an incendiary drum solo by Sherrie Maricle, by The Diva Jazz Orchestra. Hines segues effortlessly from remembering the past into embracing the present, dancing alongside the future of tap dancing in the sensational Manzari Brothers and the super talented youngster Luke Spring.

The highlight of the night came with these performances. The 20-something up-and-coming John and Leo Manzari are everything you’ve read about them. They take the stage in sleek white suits and gleaming black tap shoes, smug smiles across their faces. Their saucy battles with Hines are reason enough to want to keep watching them, but their solos and duets are the reason to go back and see them again. Separately and together, the Manzaris light up the stage with their crystal clear taps, showy tricks, and stank faces a capella, reminiscent of Savion Glover’s signature rhythmic style.

Add to this the wildly impressive solo by 12-year-old Luke Spring, whose saddle shoes and three-button vest have him looking straight out of the '60s himself. Spring’s solo is also a capella, toeing the line effortlessly between Broadway and rhythm tap. The Manzaris sit onstage and lead the charge for whoops and cheers, the atmosphere in the theater turning to that of a dance competition, as Spring moves through his solo. Though he misses a tap here and there, all is quickly forgotten when the Manzari brothers return to the floor and the three of them finish out the section together, not a muddled tap between them.

In the only mild disappointment of the evening, Chekhov’s stairs never get used to their full potential, but the full ride of the evening was more than enough excitement and impressive tapping to make up for it. The show closes with all four dancers onstage, and a rousing standing ovation from the audience.