August 10, 2019
Film
Theater Feature
From Page to STAGE: The Evolution of SUBMISSIONS ONLY

Creators Kate Wetherhead and Andrew Keenan-Bolger dish on the development of their popular web series, what makes their partnership thrive, finding daily inspiration, and more.

“It’s pretty exciting being a struggling actor in New York City. Think about it… every day brings with it either the possibility of ultimate triumph or outright rejection. Maybe ‘exciting’ isn’t the right word.” — Penny Reilly, SUBMISSIONS ONLY

“From the start, ours was solely a work-driven relationship,” says actress Kate Wetherhead, when asked about her reputable professional partnership with fellow actor Andrew Keenan-Bolger. “There was an honesty and an efficiency to how we worked... one that might have felt more complicated had we already been good friends.”

Of course, it’s now a well-established fact that “through that work, [they] became really great friends,” and with their wildly imaginative minds since advantageously working as one, they’ve been able to conquer larger territory, and explore concepts that seemed too grandiose to take on alone.

“I think having accountability for another person has played a huge part in our success,” says Keenan-Bolger, musing on what makes them work so well. “Both of us have always been big dreamers and so-called ‘big idea’ people, but I think until we found each other, it was hard for us [separately] to motivate ourselves to really follow through on those ideas.”

And it’s a good thing they found each other when they did, as the result of their combined creative power displays something far beyond simply “following through.”

Since officially joining forces in 2010, their collaborative efforts have spawned a celebrated book series, several short films, and even an upcoming, high-profile feature film. But even so, their self-proclaimed pièce de résistance (“to this day, it’s definitely the thing I’m creatively most proud of,” Keenan-Bolger asserts) lies wherein it all initially began: with SUBMISSIONS ONLY, the acclaimed Broadway-centric web series chronicling the medium’s arduous audition process and the many eccentric misfits who partake in it.

Having hit it off during a 2010 Dallas Theater Center production of It’s a Bird... It’s a Plane... It’s Superman, they both arrived home from said production, and, finding themselves simultaneously unemployed, the seeds of their creative partnership began to germinate.

United by “a similar view of what made things absurd or silly,” they could foresee hints of a possible project to be completed. But the question still remained: how to bring it to fruition?

After a conversation with husband Jeff Croiter, of Tony-winning Peter and the Starcatcher fame, Wetherhead pitched the idea of a web series, which Keenan-Bolger agreed would be the most viable approach.

Setting it in the theatre world was inevitable.

“We arrived at that idea pretty quickly,” Wetherhead explains, “because it was really the only subject we could depict with the resources we had, which were no money, and a close-knit group of actor friends.”

“I also think we were at a point where we both had had enough experience — and experience meaning both success and failure,” she continues, “that we were able to have, not even a unique perspective on the business, but just a perspective, period.”

You can bet that perspective was paramount in determining the direction this series would take.

“I feel like our industry, in both film and television, tends to be depicted more in the dramatic,” Keenan-Bolger explains. “Of course, that always seemed so crazy to us because we think of our business as hilarious.”

As such, though notwithstanding that in order to give it its serial arc, the central focus is rooted mainly around the foibles and misadventures of struggling actress Penny Reilly (played by Wetherhead herself), the overall aim of these two forward-thinking creators was to devise a premise that ultimately gave its viewers a more holistic view of the business at large, while “exposing where the silliness lay within all of those components.”

And while there’s no doubt that “putting on dead people’s hair, other people’s clothes and pretending to be someone you’re not” may provide enough farcical material in itself, it was the array of firsthand experiences in and out of the rehearsal room – often spurred on by such an unconventional practice – that ultimately informed (and solidified) what they knew all along: “It never even occurred to us that this would be, and should be, anything but a comedy.”

Another aspect that seemingly never occurred to them? The series’ skyrocketing appeal.

“Honestly, our aim was just to create something fun and irreverent that would make us laugh,” Keenan-Bolger says, of the aftermath. “But once we started gaining popularity, we realized we were capturing certain truths about the business... so many people came up to us and said, ‘This is me. This is my life. You are depicting my life.’ We even began retelling the stories of specific people in our community, just because it was so relevant.”

“And of course, all the while, we’re simply depicting our lives,” Wetherhead cackles. “It really floored us that people were responding to these [truths] so well.”

And not just any ordinary people. Broadway heavyweights like producer Kevin McCollum, who was so taken with the idea, he definitively joined the venture at the start of Season 3. “That someone who was such a revered figure in the community” — “with a proven track record for such massive success,” Keenan-Bolger notes — “would give us not only this seal of approval, but also his encouragement and his own participation in making more of it simply meant the world to us. It allowed us to expand our production and our storytelling and produce the show we always dreamed of from the beginning.”

Following an acclaimed initial run on BroadwayWorld.com, SUBMISSIONS ONLY shifted to an exclusive, weekly-based YouTube release after their channel signed with Collective Digital Studio’s MCN — a move prompted by the series’ meteoritic (and, again, unexpected) rise, both in popularity and demand. 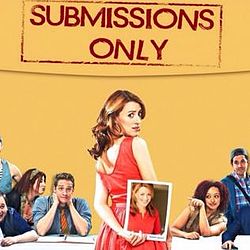 Then, along came the STAGE Network, a web-based streaming platform, which, since August 2013, has been devoted to offering both existing and original theatre-based programming, as a means of making the art form accessible to all via a sleek, fresh and modernized layout.

“From the very beginning, SUBMISSIONS ONLY was at the top of our list of [programs] we knew we had to get for the site,” asserts STAGE’s Co-Founder and Executive Vice President Bobby Traversa.

“It was the first time I remember watching something on the Internet and not feeling like I was watching something on the Internet....It wasn’t just a bunch of out-of-work actors filming themselves about being out-of-work actors....[It] was a fully-realized, well-crafted, brilliantly executed, complex and truly groundbreaking web series....something unlike our industry had ever seen before.”

Having made his objective known, Traversa acquired SUBMISSIONS’ first season shortly after launching the network in full, and with the official launch of Season 3 last May, the entire series, and its additional copious bonus material, is now available to stream in its entirety... and to say the creators are ecstatic would be an understatement.

“We’re so excited to finally have a [platform] to share these episodes in the way they were originally intended to be viewed,” says Keenan-Bolger, with Wetherhead adding that, given STAGE’s slate of other programming options, “We got really lucky....it all just sort of came together and seemed like a ‘right-fit-for-it-at-the-right-time’ sort of thing.”

Again, STAGE’s revamped presentation of the material includes not only each of the episodes in its entirety, with video quality remastered in high-definition exclusively for the platform, but also the aforementioned “special edition content,” which, much like DVD bonus features, sees the creators alongside stage faves (and cast members) such as Anne L. Nathan, Steven Bienskie, Lindsay Nicole Chambers and Santino Fontana, as they dissect plotlines, dish on the production process and special guest stars, and of course, divulge backstage secrets.

“It was a great excuse to get the gang back together and reflect on our experience,” Keenan-Bolger says, of the bonus material, “while revealing (and, in our case, reliving) specific memories that had never, ‘til this point, been revealed.”

“The thing is, we weren’t producing this for NBC or some cable network,” Wetherhead adds. “We were very grassroots about the whole thing. And, I do think, for the tried-and-true fans, there’s genuine interest in how this all came to be. So, this is a gift for the fans as well.... a little peek behind the curtain to enhance the [viewing] experience and make it even more fun than it might already be.”

So, with such a lasting cyber-legacy, can these two Broadway masterminds successfully say the series’ trajectory lived up to their expectations?

“It’s hard to say if it fits with what we expected because we started out with so few expectations,” Wetherhead says. “Honestly, we thought we’d be lucky if we got a few thousand followers off of Andrew’s blog.” (“I wasn’t even positive when we wrote the first script that we would ever even film it,” Keenan-Bolger admits). “We really, truly had no idea that we would gain the tremendous following that we did.”

Nonetheless, they’re grateful for the support, as well as the wealth of opportunities that opened up to them as a result of initially taking that leap. “It’s given us a much deeper appreciation of what it takes to make something,” says Keenan-Bolger, describing that the series allowed them not only “agency and creative fulfillment on their own terms, but the chance to put skills into action that, up until that point, had been lying dormant.”

“I feel like the artist I was in 2010 is just now so much more nuanced, yet at the same time, kind of humbled,” continues Wetherhead. “Like, the more we’ve figured out how to do through working on this series, the more I am in awe of the people who actually do it every day.”

While they remain hopeful for a future life for their scrappy little series (“We’d love a Season 4!” Wetherhead shouts emphatically into the stratosphere), they recognize what they’ve accomplished so far has undoubtedly made an indelible impact, and waste no time in encouraging others to pursue their passions as fervently as they have.

“If you have a creative impulse, find a few people you trust and make the thing,” Wetherhead advises.

“It’s really that simple,” Keenan-Bolger chimes in. “Just do it and don’t overthink it. Because if you do [overthink it], you can get easily discouraged. We definitely would have…. if we had known what lay ahead regarding location permits, or scheduling shoots, or writing press releases, we probably never would’ve picked up a camera.”

“For sure,” Wetherhead nods in agreement. “Especially in the early stages, passion can be more effective than knowledge. But wait…” she backtracks (with a laugh, true to form). “That’s definitely only applicable to those in the arts. If you’re a scientist, please don’t follow that advice.”

Keenan-Bolger chuckles in response. “But seriously,” he concludes. “Ignorance is sometimes a handicap, but it also can be a superpower. So, go for it. You never know what might happen.”

Perhaps you might find yourself in a similar situation where the stars suddenly align, submerging you in a splendiferous shower of “fortune, luck and fairy dust”… and, as these two visionaries have so dynamically demonstrated, if you play your cards right, it just might change your life.

SUBMISSIONS ONLY, created by Kate Wetherhead and Andrew Keenan-Bolger, is currently streaming on the STAGE Network. For more information, including how to subscribe, please visit www.watchstage.com.