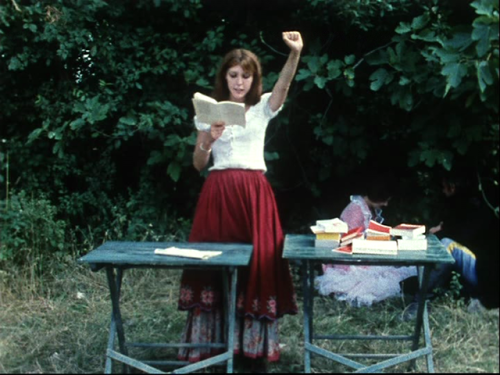 The charm associated with Jean-Luc Godard's early films like Breathless and Band of Outsiders turned into something more formally challenging in the political works he did after the failed revolution of 1968, several of the films he made during this era are showcased in Godard and the Dziga Vertov Group, a series available on MUBI. Godard's style changed when his interest in the Maoist movement became more of an allegiance, he lost interest in exploring fiction as he considered it to be a privilege of the bourgeoisie. Instead, the politics that resisted the oppression of the working class were to be used to fuel the creation of cinema.

Jean-Pierre Gorin was a politically active filmmaker who helped with some of the dialogue in Godard’s first solely political film, La Chinoise. The two then later decided to collaborate, creating the Dziga Vertov Group, and began to expel any sort of bourgeoisie habits from their personal lives and art. The result of this artistic collaboration resembles pro-Maoist propaganda rather than a traditional plot. A Film Like Any Other follows workers being directly effected by the classist society, while Wind from the East portrays a cloudy storyline about the making of a political film while being a political film itself.

British Sounds and Struggle in Italy, were funded by different European television production companies, which highlighted the struggle of the working class in other European countries besides France. Some of Godard’s fans in France entertained the ideals portrayed in these films but American fans were few and scattered. In the book Everything is Cinema: The Working Life of Jean-Luc Godard, author Richard Brody mentions this American support could have been due to ‘nostalgia’ or ‘political exoticism.’ But the support was short lived and possibly the only time these films received attention: nostalgia can only carry crowds to attend for so long and the negative attitude towards Communism and Maoist views destroyed exoticism, replacing it with taboo. Those who were trying to escape the fear of the Cold War found no solace in Godard's films during this era.

Godard soon departed from his political filmmaking after a divorce, and a nasty breakup from Gorin. The filmmaker’s own step back from these revolutionary ideas also played a part in the disappearance of this era from the mainstream. These films are not as beloved as some of his other works, but they're worthy as examples of the cinematic devises used by radical filmmakers to make their political views known to the masses. Even though the Dziga Vertov Group creations are scarcely distributed or shown they allow us to see inside Godard's genius, and one of his many attempts of transforming the medium of filmmaking.

For more on 'Godard and the Dziga Vertov Group' visit: