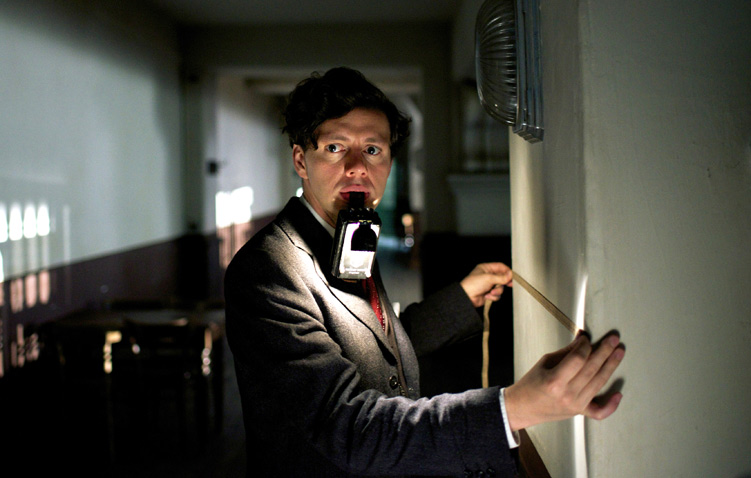 More than a decade after depicting Adolf Hitler’s last days in Dowfall, director Oliver Hirschbiegel, is covering the Third Reich from a different angle in 13 Minutes which concentrates on the years leading up to WWII and the failed attempt by Georg Elser (Christian Friedel) at the start of the war to assassinate Hitler at the Bürgerbräukeller in Munich on November 8th 1939.

On the anniversary of Hitler’s unsuccessful 1923 coup, his speech is cut short, resulting in him leaving the beer hall 13 minutes before Elser’s bomb detonates. We have seen Elser in the ticking watch opening sequence, on blooded knees, painstakingly installing his explosives in a hollowed-out space of the beer hall pillar (which took him over 30 nights). Later that night, Elser is caught crossing the Swiss border with his pockets full of crime scene paraphernalia. At Hitler’s command, he is interrogated at the Reich Security Main Office and tortured by Gestapo Chief Heinrich Müller (Johann Von Bülow) and head of the Criminal Police Arthur Nebe (Burghart Klaussner). Elser insists that he acted alone but his interrogators fail to see how an ordinary German citizen could commit such a treasonous act without the string-pulling of an organized group. “He may be a country boy, but he doesn’t lack ideological conviction,” says Nebe, who later submits to the notion that “you can’t get more out of him than the truth.” Müller replies, “We decide what the truth is!” When his loved ones are arrested, Elser confesses his lone wolf methods.

In flashback and contrary to history’s often tendentious, misanthropic portrayals, we meet a carefree, apolitical Elser, a carpenter and musician, doused in rich sunlight and female attention at Lake Constance. Returning to the town of Königsbronn in the Swabian Alps to help his alcoholic father’s ailing timber business, Elser conducts a risky affair with Elsa (Katharina Schüttler), the wife of Erich (Rüdiger Klink), an abusive alcoholic, and witnesses first-hand the brisk, brutish outcome of National Socialism on his hometown, its converts, apathetic bystanders and victims. One such victim is Elser’s Communist friend Josef Schurr (David Zimmerschied), marched off by the Nazis to a concentration camp. Later, Elser takes a job at the steelworks where Schurr has been forced into labor. Here and at the local quarry, the components of bomb making are readily available.

Father and daughter scriptwriters Fred and Léonie-Claire Breinersdorfer focus on the extraordinary deeds of an ordinary man and the swift transition from a neighborly community to divisive cruelties. Conversely, rendering Nebe as the good cop half of the Nebe/Müller double-act is hard to swallow. The lavish natural scenery and the spectating claustrophobia of hot-tooled, fingernail splitting torture and piano wire executions impress more than the stylized segments such as Elser’s drugged hypnosis. But overall, and with the help of Friedel’s bee-stung, flexuous face that rides the gamut of Elser’s gradual erosion and the tenacious actions he undertakes, Hirschbiegel’s 13 Minutes is a worthy, touching film.

Interview: Oliver Hirschbiegel on His WWII Drama &...
A Review of ‘Filmworker’
Review: The Post
Review: The Rape of Recy Taylor