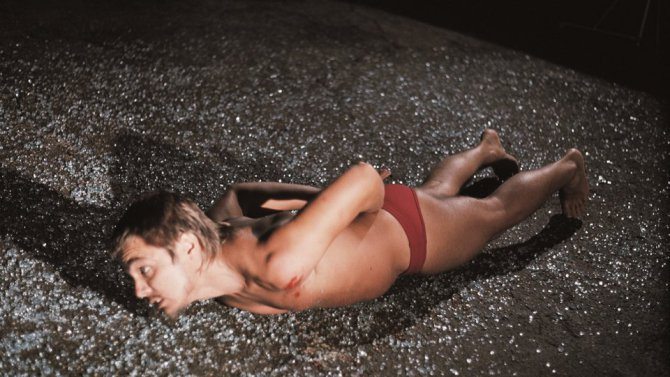 In the 1970s artist Chris Burden had one of his friends shoot him in the arm for the appropriately titled performance piece Shoot, he also crucified himself on top of a Volkswagen Beetle for Trans-Fixed, decades later in 2011 he finished Metropolis II, a 10’ x 20’ kinetic sculpture, which took four years and the work of dozens of assistants to make. So how does a reckless performance artist from the 70s come to create perfectly Instagram-able large-scale sculpture? Burden, a documentary by Richard Dewey and Timothy Marrinan might give you an idea.

Burden’s performances often exploited danger and happened on the verge of death, leading people to call him the “Evel Knievel of the art world”. He opposed this comparison, insisting that what he did was real. Thirsty for blood, the public expected Burden to continue challenging the limits of his body’s durability and viewers’ safety. The artist found himself caught up in his own reputation, stopped doing performances, and turned to another type of spectacle: large-scale sculpture.

The contrast between Burden’s early wild performances and the slick, grand scale sculpture of his latter days present the most interest in the documentary. Burden is told mostly through linear narration consisting of thoroughly collected archival material including video, pictures and audio recordings celebrating Burden’s works and marking pivotal points in his personal life. There's also testimonials from Burden’s contemporaries, friends, and critics, including Marina Abramovic, Frank Gehry, Alexis Smith, John McEnroe and Vito Acconci among others, not all of which are praising or neutrally informative.

Brian Sewell, a renowned British art critic, straightforwardly calls Burden’s performances “rubbish”. His dismissive view of the artist’s early work livens up the otherwise benevolent tone of the documentary. I wish Dewey and Marrinan would have continued to counterbalance praise with critical point of views when it comes to Burden’s work. Was Burden’s development an organic evolution of his artistic interest? Dewey and Marrinan don’t give any answers but provide enough material to fiddle with these thoughts.

Unfortunately, the film barely touches on Burden’s representation by Gagosian Gallery or the exhibitions of his work in major global museums. Detachment from the relationships with the institutions creates a romanticized and slightly naïve portrait of an artist. But Burden, nevertheless makes for a dignifying tombstone for the artist.