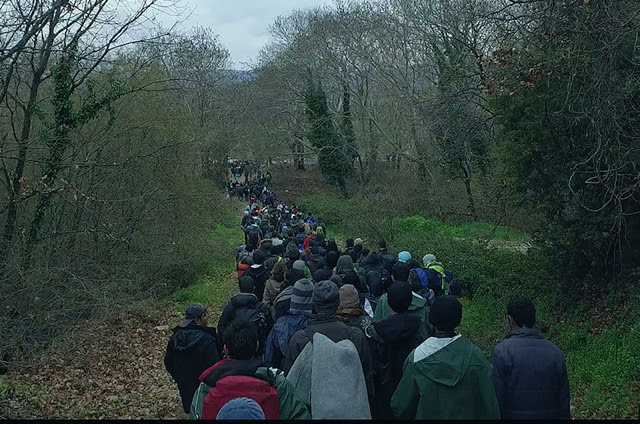 To emerge from a movie and compliment its cinematography is either an admission that in lieu of any meaningful insight, the speaker is vain enough to attempt a weak assertion of technical knowledge, or, it can serve as a dig in the Aretha Franklin school of “great gowns, beautiful gowns,” her devastatingly mean comment on Taylor Swift as a singer. The “if you have nothing nice to say” school of put-downs. So how can I say that Ai Weiwei’s new documentary-epic, Human Flow, had great cinematography, struggle to come up with anything else, but still convince you that neither the former nor latter reason applies?

It would be absurd to insult this documentary, much less write a review that contains any put-downs. It is a sprawling movie that seems to start from one definite location and topic – the migrant crisis, swelling the shores of Greece – and then expand slowly but gradually until you as a viewer, have lost all sense of scale or focus. This isn’t a particularly pleasant experience over the course of three hours, but it could not properly be described as bad.

Ai is fascinated with scale. With the camera’s ability to convey it, but the mind’s inability to every truly conceive of it. A shot that zooms from far above – where the world looks like a neat set of models – straight down to a square foot of pavement, is a cinematic cliché. I’d warrant nobody who has seen a mass-market action movie in the last 20 years has not seen it at least once. But when Ai employs it, after priming your brain and eyes for over an hour, you see there is something new, something meaningful in this zoom. Something to be said about the unbearable scope of the world, and the heartbreaking specificity of every one of us.

This is a microcosm of his larger cinematic project. He attempts to breathe some sort of meaning into a series of catastrophic images we have become numb to. We live in a world so shaken and over-saturated that tragedy has become cliché. It is a vile complaint of a privileged person, but who could really disagree? So we're in some debt to Ai for freeing us from our baser inclinations, and reconnecting us to some meaning in the inconceivable tide of people flowing around the globe, homeless, denigrated, hunted, harassed and abused.

But what is this meaning? I can’t say. It’s too big, or else it is too simple. Tolstoy said he couldn’t summarize War and Peace because then he would have to just say the whole novel again. David Foster Wallace said clichés were banal but true, and the trick was to keep them alive at the forefront of the mind. Some combination of these two concepts have resulted in me leaving the Human Flow and saying, “The cinematography!” Because that at least was unquestionably good. The rest was neither good nor bad. It was everything, and impossible to talk about.