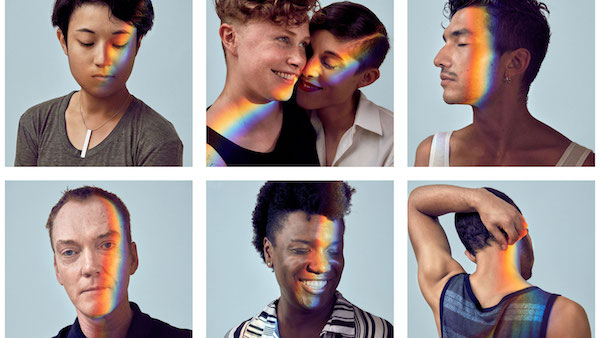 It was with great interest that I attended BiView: Bisexual Representation in Media at this year’s NewFest: The NYC LGBT Film Festival. The panel was moderated by Eliel Cruz, a vocal activist who was well prepared with questions that evoked a central theme: why does representation matter? The four-member panel included Taylor Behnke, Alexandra Bolles, David J. Cork, and Denarii Grace. Each panelist mentioned how they are looking to see a bit more of themselves portrayed in television and movies.

In order to fully understand the misrepresentation of the bisexual community in media it is vital to look off-screen at the struggles those attracted to more than one gender face. Behnke and Bolles both work for the organization GLAAD, which is a big advocate for acceptance of LGBTQ issues. One of the facts brought up during the panel was that people who identify as bisexual have a higher rate of mood disorders such as anxiety and depression. Also, they are more at risk for certain health issues such as heart disease and cancer. Outside of medical statistics, social stigma is just one more hurdle. It is less likely for bisexuals to be open about their sexuality to those they love or even to themselves due to the misconception that bisexuality is synonymous to promiscuity or confusion. This is where truthful representation could play a vital part for the bisexual community.

Though there have been some characters portrayed in primetime television or in films that are attracted to multiple genders, their sexuality is often shown as messy or a problem; sometimes they are even killed off as a consequence of their attraction. These tropes only reinforce stereotypes that bisexuals face everyday by those who do not understand fluidity of sexual attraction. The panel all agreed this isn’t to say bisexuals are saints and should be shown as such because all humans are complicated in their own way. However, inaccurate representation leads to further confusion. Someone who might be struggling with accepting their own sexuality could personalize negative emotions when seeing a bi-identifying character as hated or the root of a problem. Families that are unable to accept someone who has just revealed they are bisexual do not need negative content to further skew what it really means to be bi. These situations are already toxic and stall progression from happening.

Good news: positive representation is achievable. Each of the panelist brought up how emotional complexity and cultural diversity within bi-identifying characters is vital. Allowing a character to accept their sexuality could also help those struggling with accepting their own reality. Cork, who is the creator of Bi: The Webseries, mentioned having more male bisexual characters, stating those that have appeared recently were negative and short-lived. The best people to create accurate arcs are writers who are bi-identifying. Studios should seek out bi writers and consultants when dealing with specific storylines in order to create something dimensional. Even if they don’t: creating original material is accessible in this technological age or simply supporting artists working on positive projects.

Representation in media matters. For a group that is at risk for unfavorable physical, mental, and emotional factors shines so much hope. Everyone who identifies as bi is different in appearance, background, social class, education, race, and even the way one identifies within the community. The time has come to show the world that bisexuals are trustworthy, devoted, creative, and diverse people. If we don’t do it, no one else will.