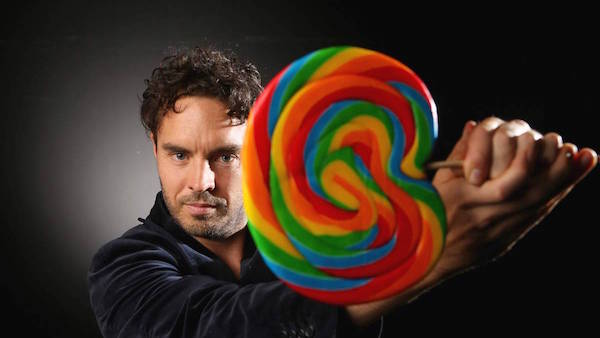 That Sugar Film is a documentary in the vein of Super Size Me that explores the health effects of a particular food group. In this case the target is the sugar industry. Filmmaker Damon Gameau approaches this subject in a fairly pedestrian, tawdry manner. The documentary is filmed with consumer cameras, and only garners a filmic look during montage segments where footage from external sources is used. This doesn't really hinder the film, though it's hard to look past the aesthetic. The premise is simple: Gameau is to consume the average Australian's 40 teaspoons of sugar a day, but only from foods perceived to be healthy (such as yogurts, cereals, snack bars, etc) for a duration of 60 days. What are the effects on our subject's mind and body, from a regular, supposedly healthy diet? The results, of course, are predictable to viewers familiar with the most basic nutritional understanding. In that sense, the film isn't particularly revealing or exhilarating. However, the style employed throughout - cartoonish green-screen scenes, Gameau traveling through the human body in miniature form, things of that nature - may be an effectively engaging element to reach children. This is a film that would work well in elementary and high-school classrooms - which may be the most significant victory here.

Some of the expository segments regarding the history of our modern, western food culture are astounding enough to captivate you, and easily digested. There are simply too many facets of the trajectory that got us here - a world where sugar is everywhere, in everything, the cause of some of the most devitalizing medical conditions - to not be engaging or entertaining. Gameau probes into the corporate interests that maintain the status-quo, such as Coca Cola sponsoring medical studies, buying the moral compass of scientists for whatever price - the usual, disturbing mannerisms of a corporate machine too big to fail. The modern trend of "low fat", for example, is essentially an invented trend to take the focus off the real issue - sugar. Historical, corporate marketing techniques such as this, are perhaps the most interesting element of the documentary - but simply aren't explored enough to pop.

One of the more memorable acts of the film takes Gameau to Amata, an aboriginal community in Australia, that is Coca Cola's highest per-capita consumer spot in the world. To put it in perspective, there are 350 citizens that consume 40,000 liters of soda per year. The resulting kidney failure has cost its community an vast amount of lives (mostly people under 40), and caused one of its citizens to spring into action. He founded an organization called "Mai Wiru" that provides fresh produce and whole foods for people. There's value to that story, as it portrays a sense of choice, action, and the possibility of change. Things can be done, and change can come from within. This is an inspiring thing to teach kids, and is possibly this documentary's saving grace.

Besides a few interesting personal stories and explorations of communities and citizens, That Sugar Film does not offer anything particularly exciting or momentous. The research is out there, and you can read about how deleterious sugar and our modern culture of high-fructose foods is debilitating and crushing our citizenry, leaving future generations to foot the bill. This is nothing new. The film condenses its most interesting parts into chunks too small to stand out, and not big enough to leave a mark.

I grew up in Hamburg to a German father and Ecuadorian mother. Obsessive student of film, Hip-Hop, and social science. I'm motivated by the drive to change things, yet grateful for what is. I love the dark dreambox that is the cinema auditorium, and am constantly amazed at the immersive nature of storytelling. I hope to one day create something that hits someone in the brain with thunderous effect.