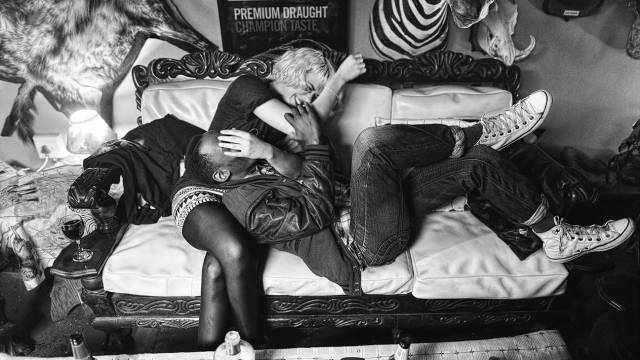 By never staying still, dodging the inevitable becomes routine. Grief, movement, love, confusion are some of the elements that proliferate in this gorgeous film by Sibs Shongwe-La Mer, a first time filmmaker who also wrote, and stars in the film. People walk, drive, climb, and are always moving away from the position where it is most painful to be, in surrender.

Two friends, Jabz (Bonko Cosmo Khoza) and September (Sibs Shongwe-La Mer), drift though Johannesburg trying their best to avoid reality. Philosophizing about the decrepitude of the nation and the world, about women, about drugs. Their highfalutin, gentle tones mixed with street slang and South African accents makes the duos dialogue hypnotic and enchanting. This lovely relationship portrayed brilliantly by Khoza and Shongwe-La Mer gives us shades of male camaraderie, from stirringly gentle, to I’m-not-your-fucking-girlfriend-man defiant.

The film is crammed with individual crises, but the major disaster of the film is when Emily (Kelly Bates) hangs herself and live streams it worldwide, garnering millions of views. She was a friend of Jabz, September, and their whole crew. While the characters struggle with the death of a Emily, they all consider her reasons for killing herself, bringing up some tough concerns around suicide, like what makes it okay to commit suicide? If life is totally hollow anyway, maybe it’s not such a big deal? It seems like Shongwe-La Mer keeps things moving just so he can keep his characters alive.

While taking on such dark issues as suicide and the worthlessness of life, this is a moving, beautifully shot film with a very interesting cast of actors. So it is interesting actors playing interesting characters while Shongwe-La Mer shows then all creating the ultimate character, Johannesburg. Filtered through a critical yet sympathetic lens—both literally and figuratively—cinematographer Chuanne Blofield’s shots are sad, longing, showing the decay of city, while making it look striking and beautiful. It’s impossible to tell if the land is killing the characters, or the characters the land, but the relationships are leading to death either way.

Chris is a Brooklyn based blogger and freelance critic. He has completed his MFA in creative writing, and maintains a film blog with a solid double-digit readership.