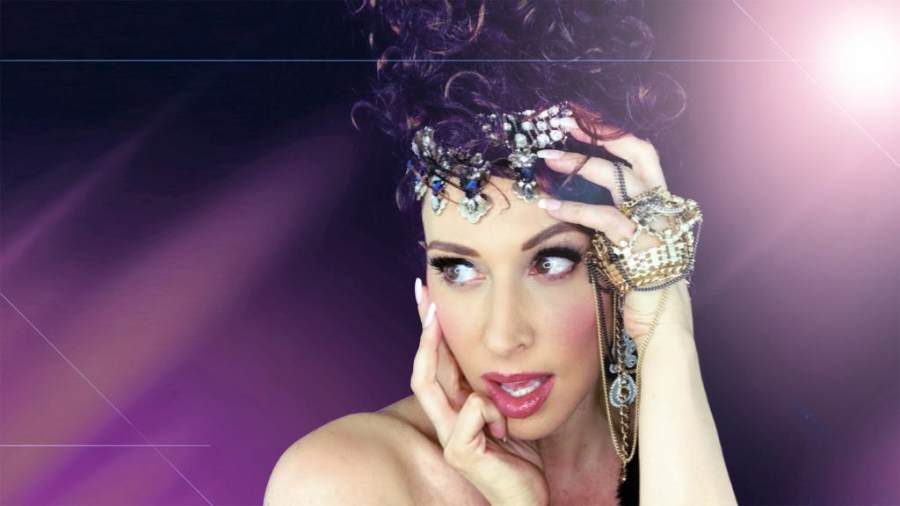 We caught up with the hilarious, incredibly talented Lesli Margherita to discuss her upcoming shows at Feinstein’s/54 Below.

I saw you play the Devil’s assistant in Matthew McConaughey vs. The Devil at NYMF and I would’ve totally sold you my soul too.

How was it to play that part?

I’d worked with the director in Matilda, he said the script was hilarious and I had to play the devil, so I said “of course.” Once I read the script I couldn’t pass it up.

What’s your process for selecting the songs you’ll sing in a cabaret show?

I have different shows for different types of music, for a show like this at Feinstein’s/54 Below I love to sing pop music more than theatre standards, so I make a dream list of what I’d like to sing. I ask myself what I wanna talk about and make a list of topics, it’s really funny because most of the time they end up making sense together. Then I go through what I feel strongly about for that version of the show, there are stories and songs I’ve done for years that have to stay. They’re classics to me, but every time I do a new show there’s new pop songs out that I wanna do my own take on. You wanna be able to do everything but you can’t, that’s why I have so many different shows.

Is there one song you’ve never been able to fit into any show despite loving it?

I like to sing “My Man” from Funny Girl and I can never fit it into any show.

Not even in the encore?

No, because my shows tend to have a real story arc to them, I like to think of them as 80 minute shows. If a song doesn’t make sense in the show I don’t put it in.

So if you have this arc and you’re doing a song from Zorro or Matilda do you try to play the character during that song?

I’m me, I don’t do anything from Matilda in this show, I do songs from Zorro to tell the story of how I got there, how I won the Olivier, and so the songs are interspersed into the story. The songs come out of the story, but they’re always me, you can’t replicate a performance in a cabaret show. It’s weird and out of context.

Have you ever been tempted to write a musical about your own life?

I feel these kinda are, especially this show. I have a different show of standards but Rule Your Kingdom is my musical. It’s about my life and things that are important to me, like I tell the audience, I have your money already so now I’ll sing about things I care about.

Why is it important for you to do cabaret shows and festivals, instead of just sticking to Broadway?

It’s important to get my views out, things I want to sing and talk about. The festivals are so important to me because they’re the future of theatre, I feel like if I can get any audience to them to get their work seen, that’s the most important thing I can do. It’s also important for me to reach fans who don’t know me as a person. If somebody asks me to do something and I can, I say yes.

When are you going to write a comedy book?

(Laughs) I’m always writing! My computer is full of stuff, so writing that book is my dream.

For more information on Rule Your Kingdom click here.

About ten minutes into Who’s Holiday, the new holiday-centric solo show currently playing at the Westside Theatre through December 31st, a meek, demure Cindy Lou Who peers out at an older gentleman in the first few rows. “I’m sorry, sir,” she says, innocently. “Was that word offensive?” And just as soon as this man can give a response, her expression immediately turns stone-faced. “It gets worse.” She’s not wrong. You may think you know the demure little Who with “a coo like a dove” from Dr. Seuss’ beloved children’s book, but we guarantee: 60 minutes with this boozy, drugged-up, twerk-tastic reincarnation and you’ll never look at Cindy Lou the same way again!! The brilliantly irreverent parody, courtesy of playwright Matthew Lombardo, imagines the Who in question as a 40-something Whoville pariah, banished to the depths of Mt. Crumpit and condemned to living in a trailer. While preparing for a lavish Christmas Eve party for her friends, she fills us in on the gaps between that fateful night meeting the Grinch and the bizarre turn of events that led her to her current situation — all in rhyming couplets, to boot! Complete with an original rap, a semi-cooking (and drinking!!) segmen …Read more