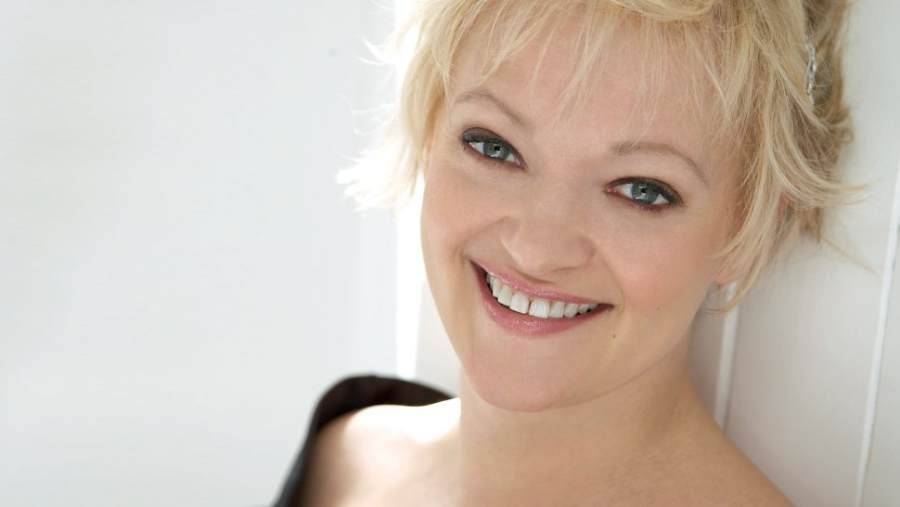 Maria Friedman calls me from a landline in Saks Fifth Avenue in Boston (where she is directing Merrily We Roll Along), where a saleswoman (thank you, Paige!) has kindly let her use the phone so we can talk about her upcoming shows at Feinstein’s/54 Below. Friedman explains she can’t believe how unusual the setting is, she’s sitting at the Armani counter but one wouldn’t guess she’s surrounded by strangers given how passionately and eloquently she speaks about her love of music. This week, Friedman will make her solo debut at the renowned New York nightclub with a show dedicated to Leonard Bernstein and Stephen Sondheim, two composers that have shaped her career. The three time Olivier Award winner has the ability to transport audience members to different worlds with her astonishing voice, and as she continues exploring different aspects of her career we discussed her work as a director, and how she learned to think in musical terms.

Stephen Sondheim and Leonard Bernstein are probably the greatest…

...have you found any fascinating connections between their work, other than West Side Story of course, and is that part of the reason why you’re doing the show?

The basic reason I’m doing this show is I work with a very purist musical director called Jason Carr, I always plan the opening and ending songs of my shows, and when I was doing a show on Sondheim I wanted to end it with “Somewhere” as a kind of aspirational kind of feeling of hope which is something we all need. Jason said I couldn’t do that because it was Bernstein and Sondheim and he felt it wasn’t right. I called him a purist but started looking at other Bernstein songs he sent me and it was clear these were the two quintessential New Yorker geniuses. I love and admire their work, it’s been a huge part of my life, so it felt like a natural fit. The two have a great love of their city and a great capacity to move with their music, it was a happy fortunate circumstance that led me to it.

Are the specific songs which connect to each other?

Yeah, for instance “Lonely Town” and “Another Hundred People” convey extraordinary feelings of being in places full of people and being alone and unable to connect with others. I don’t want to give it away, but I open the show with two songs I’ve put together which are talking about New York as a city, they’re from two different composers and two different shows, and they both have a great sense of romance. All of Steve’s songs are packed with wit, humor and love, so are Bernstein’s. They also require so much from the performance and the audience, they require we explore together. As a performer I love to remind people as an interpreter of these great artists I’m trying to hold the hand of humanity.

You rightfully mentioned we need hope to escape this world.

It’s not even to escape it, but to find the courage and strength to live in it.

Have you been seeking refuge in art?

I don’t go to things for refuge but for ideas and thoughts. Steve’s ideas in “Move On” and “Finishing the Hat,” and those things about being in the center of something. We just had the third preview of Merrily We Roll Along, which I’m directing in Boston, and the ideas in that perfect piece are about being careful and mindful of the gifts we’re being given, how mistakes are made by everybody but we need to own them, and not to be swayed towards the shallow. I love music and words because they are a universal language, not devoid of politics, but they help bring people together. Steve is such an inspiration, I feel I have a duty to honor the composer and writer.

You’ve acted in, and directed shows by Sondheim. What insight into his work did you get by doing both?

I couldn’t admire him anymore, he changed my life, he gave me a life of music, travel and friendship. Directing I’m in awe, gobsmacked about the collaboration between him and his writers. The precision, detail, craft, the connections are scattered all through the piece, when you’re in the piece your job is to interpret it from your perspective, you never see the show, or the other characters’ development. Merrily is so underestimated, I hope our production reminds people how incredible George Furth’s book was. I’m just so proud of this production.

Are you a Frank, a Charles or a Mary?

I played Mary when Steve and George came to England to rework Merrily, so I know Mary in side out. I feel I have a bit of all of them though, that’s the genius of it, they’re a triangle and they’re codependent. I have a bit of the good and a bit of the bad, they’re reflections of us.

When you were growing up your parents were musicians, does that upbringing mean you learned how to think in music, if that makes sense?

I think that makes total sense. I feel rhythms in writing, in words and text. I think I’ve seen change as a musician, it has a tempo and a pulse required for the piece to move on or slow down. I absolutely feel it. It’s very astute of you to say that. I think there is rhythm in everything. I’m driven by communication, I love stories and always have. They’re an incredibly important part of society, we need to pass on stories, not necessarily as morals, but to make people roar with laughter, or cry, I think they make us feel more human. I feel very blessed I get to do that with my life.

You’ve played Roxie Hart and Fosca. Both Chicago and Passion have pairs of incredible female characters, having done one are you ever intrigued by doing the other, in this case Velma Kelly and Clara?

Actually no, I don’t think we can do everything. I was never a chocolate box beauty, or leggy and a sexual animal, I’m more character driven. I’ve done the things I hope I’m good at, it would be a tragedy for me to try to play Velma, and a tragedy for the audience quite frankly (laughs).

Speaking of audiences, besides acting and directing, why is it important for you to also do nightclub acts?

It’s like Frank Shepard says “if I didn’t have music I’d die.” I just need it, I feel the most alive in the world in a rehearsal room when I’m singing away with the piano. Making music together with the audience in those rooms where I can see their eyes and I feel like we’re having a chat makes me feel so lucky. I grow with the songs, they mean different things to me now than they did 20 years ago. It’s just delicious!

You’ve played so many Sondheim parts, are there any left you’d want to do?

He’ll have to write you a new part then.

Oh my God, in my dreams. I might have been born in the wrong country for that (laughs).