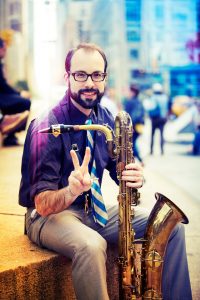 It's not often that a musician can elicit a unique personality on more than one instrument. Andrew Hadro does just that with both the baritone saxophone and the flute on his new record "For Us, The Living". His baritone has the weightlessness of a butterfly in flight as it warbles and meanders along while his flute slithers about like a snake. It's the juxtaposition of these two personalities --especially on the song "Forever, All Ways" -- that takes the listener on a compelling ride.

Hadro has the assistance of Daniel Foose on bass, Carmen Staaf on piano, and Matt Wilson on drums. His choice of tunes (which are all from modern American composers) have all of the twists and turns of bop with the attitude and "looseness" of fusion. Yet, fusion would be the last genre I would classify his work as. It makes extensive use of chord progressions and for the most part shuns static harmony. Many of the melodies throughout the record are restated in different modes, which exemplifies why a single motif is all you need to base a song off of. Catchy, lilting motifs like the one that opens "Hurricane Sandy", the album's closer, provide a sturdy bedrock for further exploration. It's more than just the head of the song: it's an opening phrase, of which many follow to tell a whole story. That is to say, he sings through his woodwinds and his dynamic command of his instruments acts as his lyrics; who doesn't love a good lyric?

Hadro's knack for expressiveness appears at every turn. The rising harmony of "Wading The Sea" is spiced up with a moderate helping of tension before sinking back down to peaceful consonance. "Paola", with its half-time shuffle, also has its fair share of melodic soloing. But don't let that fool you into believing Hadro can only play the songs "straight". He in fact coaxes grimy, bellowing blasts from his sax on the aforementioned "Hurricane Sandy" and lets loose some frenetic runs as well as some hearty squawks on "Allegrecia". He also boasts incredible control of his vibrato and volume, which is demonstrated perpetually in "Bright eyes". Yet, he is more than his technique; he is a wordsmith without words; he's an artist who could relay a complicated message with but a few notes. Just tell me you can't hear the hymn-like plight of slaves in the appropriately named "Cotton". It's there if you listen close enough.