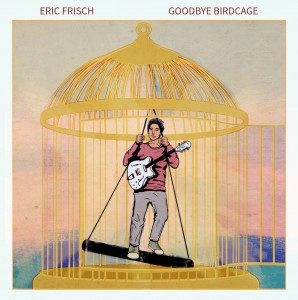 This new collection of songs by indie pop musician Eric Frisch is essentially campiness on overdrive. Frisch's main influences are The Beatles and The Beach Boys; he's managed to cultivate the most mawkish aspects of these influences and crystallize a sound that only espouses the sugariest melodies and sappiest words to bring them to life. He's to indie pop what Adam West is to Batman; the cartoony innocence and general lack of heavy-handed themes are a staple of both approaches. If The Beatles in their heyday had allowed Ringo Starr to contribute more to their songwriting process I would imagine the result wouldn't be far off from this record. That's to say, there's more campfire-like singing and platitudes here than you could fit into an "octopus's garden."

Frisch has the same kind of direct, vibrato-less baritone that characterize voices like James Taylor, which he uses to great effect on songs like "Telephone". This song, driven primarily by acoustic guitar and glockenspiel chimes, tells the story of a cat-and-mouse situation where two people can't effectively communicate their feelings by phone. One time the girl is going out with some other guy. The next time the girl returns the call but now the guy is with someone else. It's such a common occurrence in everyday life that without additional plot points it makes the listener lose interest. It's a tune that seems to imitate The Beatles' "No Reply", which speaks of a similar situation. The difference is that song adds character development and plot twists. For example, it would add so much more character and depth if, instead of stock phrases like "I can't, I'm with someone", "I'm on my own" and so on and so forth, the narrator brought personal idioms to the table like when Lennon and McCartney cry "I nearly died". That is, it pays to bring the audience into the world that the song is creating. 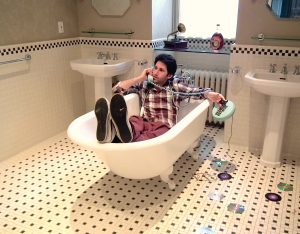 A similar thematically bare-bones approach is taken in the song "Pretty Girls". This one has a hefty Beach Boys foundation to it, specifically the layered "Good Vibrations" sound with the choral vocal harmonies and thick instrumentation. It also incorporates a clever ska horn riff which acts as the main hook of the song. However, the lyrics are stuck in thematic simplicity: guy walks down the street, sees pretty girls, can't speak to them, and that's pretty much it. This quasi-voyeuristic topic is tackled in greater depth by songs like The Police's "Every Breath You Take" and James Blunt's "You're Beautiful". Frisch's work is mostly jubilant and sometimes poignant in a strictly musical sense but comes up short when trying to put those feelings into words. "Learn to Swim" could have been a compelling anthem about taking a leap of faith due to its dominating guitar-based chord progression and wistful piano lines but is plagued by stunted adages and clichés.

I might sound harsh by this point but there is one track that stood out, and rightly so. The title track, "Goodbye Birdcage", begins with a confident, robust piano figure that is quickly joined by a crooning Frisch. The subject matter is leaving behind what has been holding you back; it is bolstered by the effect placed on the vocals that makes them sound distant, as if the narrator really has said goodbye and is on his way. "Now I'm flying, I'm flying away / Leaving home, goodbye my birdcage," Frisch warbles as the same piano that entered at the top of the track continues. This was the breath of fresh air of the record because at long last there was a metaphor, a play on words that put a unique stamp on a familiar topic. This was solid evidence that there's a good deal of potential in this young singer-songwriter. If he sticks to the lyrical inventiveness of this particular song and keeps his influences close, he'll bloom into a great writer. Give him time and he'll have his "It Don't Come Easy".