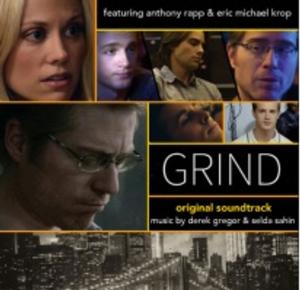 The soundtrack to Grind, a dark, funny new movie about Grindr, the gay hookup app, is finally available online. Lyricist Selda Sahin and composer Derek Gregor deftly capture the essence of Grindr, and what it means to be a young gay man right now. Each of the five songs on the album is a multi-faceted gem, sparkly and shiny on the surface, but with real meaning packed behind the pretty notes and popping beat. Other highlights: vocals by Anthony Rapp and Eric Michael Krop, who outdo themselves here.

The score opens strongly with the song "Stay the Night," which would sound right at home played in one of the bars or clubs that Grindr is replacing. It makes good use of synth, and has a very strong, fast beat. It's easy to get distracted by the cheerful, upbeat music. However, the lyrics are a perfect deconstruction of Grindr's ups and downs, and what makes it exciting. It's hard to think of "Grindr" and "poetic" in the same breath, but Sahin and Gregor manage to make Grindr seem not just another hook-up app, but part of a totally joyful lifestyle. "Stay the Night" sucks you in to the show.

The tone shifts from light to dark as the album progresses. "Do It Anyway," sung by Anthony Rapp, touches on the darker history of gay men that paved the way for something like Grindr, with the line, "I stand in someone else's footsteps who was no more brave than me. And I walk the trail they never meant to blaze. But they did it anyway."

Parts of the last song, "Used to Be You," are perhaps a bit too bluntly written. That said, a few clumsy moments shouldn't hold back an otherwise excellent score. If you're a fan of musicals, or Anthony Rapp, this album is definitely worth the five dollars on iTunes and Amazon.