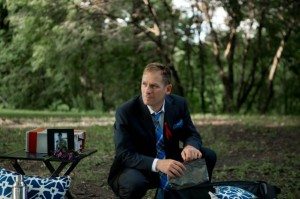 When I sat down the other day with Steven Gallagher, I made up my mind to be a doofus. (Yes, sometimes it is a choice.) More exactly, I determined to ask the obvious, and from the get-go: just how much of his extraordinary Stealing Sam is autobiographical? The play, part of the United Solo Festival, is about a man named Jimmy, in the midst of a moment of connecting with the loss of the love of his life to AIDS, and to a future far too frightening to consider. Both the work and the performance carry an impact of truth so personal, disbelief is not suspended; it is kicked out the door. It's the sort of story, I was quite sure, that must be born from the writer's life.

Not so: "There are parts that are autobiographical. I have a dog, a boxer. I'm an insomniac who loves old films. I was in a relationship which ended when I was in the middle of a renovation. But that's it. Everything else is a...story. Everything else is a play." This simple revelation from Gallagher - who, incidentally, is immensely engaging off the stage as well - humbled me. I was way, way mistaken. But, in my defense, the quality of Gallagher's work in creating and performing the role of Jimmy is just so damn solid. Steven also eased my shame: "I've had that question a lot, about the disclosure, which I don't really like to talk about a lot because it's sort of a reveal in the play." He is, not surprisingly, right; when Jimmy's truth is revealed, it is not about any writer's life story, but about one character's confronting the many dimensions of a situation going to despair -- with a lot of humor, and equal doses of flesh and blood.

Jimmy's experience is also a powerful crisis in this age wherein so many believe AIDS to be a boogeyman of the past, and this was a motivation in itself for Gallagher: "I have a lot of friends who had friends who died from AIDS in the 1990s, and I wanted to explore that difference between then and now."  Still, the focus is on human vulnerability, which knows no orientation and which Gallagher exposes through the marvelous device of Jimmy's mantra of Oscar winners through the years: "How would someone make himself forget? How would he calm himself down? And what happens when he comes to the end, what happens when he can't remember any more?" This human core provides universality: "Sometimes it's about middle age, about trying to get what you can't have. I had a lot of people, straight, men and women, say that they saw themselves in that. Really, though, what the play's about is loneliness, about how to go on when someone dies, how to move on when your life is over. I played for 120 people a night in Toronto who were not gay and they all got attached to this person in some way."

Gallagher's honesty, I'm happy to relay, goes as well to his creative processes: "The writing I could do for 12 hours; the rehearsing, I could go no more than four. And the memorizing of it was much harder than the actual writing of it. It's a story, you know? It's hard." It also pays off beautifully in the authentically superior and moving product that is Stealing Sam.

Stealing Sam is presented as part of the United Solo Theatre Festival, which continues through November 23. For more information and tickets, visit https://unitedsolo.org/

The United Solo Festival at Theatre Row continues through November 23.