August 27, 2018
Theater Review
Review: Women on the Verge at the United Solo Festival 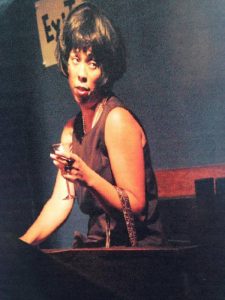 For a one-woman performance, Women on the Verge owes a great deal to a cooperative effort, and it is to the credit of all concerned that Faith Collins's time on stage is nothing less than captivating. That she performs a genuinely stunning piece of writing by Kimba Henderson is no small matter. That the direction of Keith Johnson is mostly spot-on and in place only to serve character is as well an essential piece of the whole.  At the same time, Collins is the sun around which these bodies orbit, and both contributions would be as naught without this woman's remarkable ability to take on six personas and deliver each one as though it were her core being. This is absolutely exquisite acting, people, happily grounded in a witty, insightful, and often deeply poignant script.

The five women and one young girl portrayed are all relations, and the last segment is in fact an adult return to Vanessa, the child opening the evening. With real authenticity, Collins first brings to life this little girl, frantically eager and simultaneously in terror (for good reason). This achievement is then eclipsed by her portrayal of a young woman in the subway, a brilliant evocation of a woman's pain regarding an unworthy man and a virtuoso interpretation of the Adam and Eve experience.  Two other characters, a Valley girl and distressed hair stylist, are less successful, but only minimally; in these scenarios, it is more Collins's skill that shines, and the stylist scene suffers a little from an unnecessarily diffused and fictional assortment of mute customers. The tour de force of the evening is a flawless performance of Vanessa's drunk mother. I am torn as to which element commands more admiration, the reality of the (notoriously difficult) playing of the alcoholic or the impossibly good writing of one.  Wait for a wrong moment all you like.  You will be disappointed.

In short, Women on the Verge is gorgeous theater, rich in varieties of power and range. May it happen a lot that actresses as superb as Faith Collins come together with playwrights as bountiful as Ms. Henderson. Amen.

Updated August 27, 2018. This review was of a 2014 version of the show where it won for Best Dramatic Script. It is also the 2018 winner of the NAACP Theatre Award for Best One Person Show.

Women On The Verge

In Manhattan at United Solo Festival