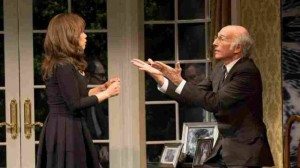 Just a couple of months ago, when plans were announced to bring Larry David’s new play, “Fish in the Dark”, to Broadway, even inside theater people knew precious little about the show. People assumed it was a comedy, and word got out that David was inspired to write the play after paying a “shiva” call to a Jewish family. Other than that, aside from the cast (which includes David himself) and designers, the lid was kept on the show’s content pretty much until previews began Feb. 2.

That mystery only helped fuel audience interest; advance ticket sales already reached $14.5 million two weeks ago, with tickets virtually sold out until the show’s current June 7 final on-sale date. Forbes reports that secondary-market single tickets are going for $300 and up; and last week, grosses totaled $1.16 million with seats SRO. To put that into perspective, the big musical “Honeymoon in Vegas”, which opened to excellent reviews, scraped together only $285K.

So tonight, March 5, the last and, perhaps, most important, piece of the “Fish” puzzle finally gets answered: how is it? It’s already a financial smash, but how did the New York critics react to Larry David’s Broadway debut as playwright and star? Here’s the rundown:

Time Magazine’s Richard Zoglin didn’t bite. He calls the show “padded out, overpopulated…and funny only in spurts.” He allows that “David works hard to please” and that the show is “hardly devoid of laughs” but it’s also “surprising to see how clumsy and old-fashioned David’s playwriting is.” (Reader beware, however: Zoglin goes on to bemoan “the sorry state of recent Broadway comedy,” including Christopher Durang’s “Vanya and Sonia and Masha and Spike”—a show I loved--as a sad example.)

Even less charitable is Newsday’s Linda Winer, who also snipes that the “old-time formula” here “could have been written by someone who hasn’t seen a play since the early days of Neil Simon.” Winer’s also put off by the show’s toilet humor (literally), so despite David’s “endearing, querulous presence,” she was unable to join in with the rest of the audience that “seemed to be having a wonderful time.”

Ronni Reich, of the New Jersey Star Ledger, criticizes the play’s sitcom-like feeling, noting that “David’s writing style is not particularly well-suited to the stage, and the comedy lacks the dramatic propulsion and tight plotting” of “Curb Your Enthusiasm”. Reich adds that although the show has “winning moments,” the first act “drags,” and the play doesn’t feel “like a fully realized, fresh, satisfying stage work.”

Deadline.com’s Jeremy Gerard opens his review by raving that “Fish in the Dark” is “occasionally very, very funny. Four-stars funny.” He pulls back a bit, though, noting that two hours is “too much of a muchness” despite the “fleet direction of Anna D. Shapiro.”

Happier to be at the Cort Theater is AM New York’s Matt Windman, who gives “Fish” *** (out of four) and doesn’t mind that the play “hearkens back to the silly and insubstantial Broadway comedies of the 1960s.” He lauds the “comically sublime Jayne Houdyshell,” even in a show that everyone knows is “just a showcase for David.” On that score, “Fish” gives the audience what it wants, and for Windman, that’s “prett-ay, prett-ay, pretty good.”

Certainly, Daily News critic Joe Dziemianowicz thinks the show is more than prett-ay good. In the one true money review of the night so far, he gives “Fish” **** (out of five), explaining that “the best thing about the humor is that it’s also unembellished and played without irony.” David, he adds, “is as good as it gets for shaking hilarity from family dysfunction.”

In his mostly positive review for The Hollywood Reporter, David Rooney echoes the general consensus that, “While David adheres to an old-fashioned Broadway model, he also lards the comedy with enough of his trademark brittle edge to prevent it from becoming too quaint.” “It’s not exactly groundbreaking theater,” he adds, “but it all hangs together…and his public eats it up.”

However, the show doesn’t satisfy the appetite of New York Times chief scribe Ben Brantley, who laughed out loud “exactly once during the evening.” As did many other critics, Brantley likens the show to Neil Simon-era, punchline-packed comedy (as if that’s a bad thing), though he makes the case that “credible, breathing, present-tense characters are nowhere to be found.”

In her **1/2 (out of four) review, New York Post critic Elisabeth Vincentelli is a bit more forgiving, calling David “an expert at milking laughs out of discomfort.” But she, too, complains of the “musty smell hovering over the proceedings... If only all of this were funnier.”