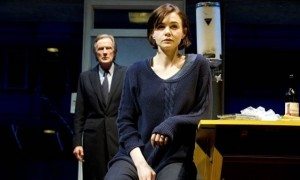 Fast forward nearly twenty years, and the play has now returned to New York, staged by Stephen Daldry at the John Golden Theater. This time, film favorites Bill Nighy and Carey Mulligan co-star, for a limited run through late June.

The production opened Thursday, April 2, and the New York critics weighed in:

Associated Press scribe Mark Kennedy called the revival “crackling” for featuring “a spectacular Billy Nighy” and “the marvelous newcomer Matthew Beard.” “Funny, poignant and insightful…`Skylight’ is a full meal in a place where appetizers often pass as entrees… You will leave full…”

In his *** (out of five) review, Joe Dziemianowicz of the Daily News says the play is “still topical” but not particularly subtle or emotionally resonant. “Nighy is all tics and poses and ants-in-the-pants restlessness. Mulligan is calm and measured,” Dziemianowicz writes, though he notes that both are intriguing, and that Mulligan makes even melodramatic moments work.

Much more positive is New York Times chief critic Ben Brantley, who calls the performances “transfixing” and “heart-piercing. . . Mr. Hare’s 1995 drama, his tightest and quite possibly his best, delivers big on the rueful pleasures [of] “tear-stained stories of impossible love.” “The great achievement of this production from Mr. Daldry,” adds Brantley, “is that it sustains each [character’s] perspective with crystalline focus.”

Almost equally laudatory, Variety’s Marilyn Stasio notes, “Whatever the takeaway for audiences hankering for a good political brawl, it’s the tragic clash of human emotions that really stings” especially when “The fierce pas de deux of love and loss and anguish executed by Carey Mulligan and Bill Nighy in `Skylight' leaves you breathless.”

In contrast, New York Post critic Elisabeth Vincentelli breathed just fine—and gave the show only 2 ½ stars (out of four). She concurs with Dziemianowicz that there’s a cold center to the play because “the lovers don’t share much, either in love or war.” She finds Nighy’s character Tom ultimately a bit “tiresome,” so the “lack of sexual chemistry makes you wonder why Kyra [Mulligan] bothers to put up with Tom.” That said, Vincentelli is highly complimentary of the actress, who is “the one who lets in the light.”

In her *** ½ (out of four) review, USA Today’s Elysa Gardner also loved the “marvelous” Mulligan, especially as directed with compassion and brutal clarity by Stephen Daldry,” so that both characters “emerge as flawed, sympathetic, believable human beings.”

NBC New York’s Robert Kahn also appreciated both actors, saying that Mulligan is “just great here” while “Nighy’s performance is full of that nervous energy that makes him so much fun to watch.” Though the play has “sharp writing,” Kahn notes appreciatively, “the characters come first.”

David Rooney of The Hollywood Reporter agrees, writing, “Directed with probing clarity by Stephen Daldry, the beautifully acted revival pits Nighy against an equally compelling Carey Mulligan. . . Daldry has drawn three exquisite performances from his cast, and they lock together both in sharp contrast and in melancholy harmony with one another.”

OVERALL: Excellent-to-rave reviews across the board should make this a strong contender for audiences, even with the current Brit-heavy competition (the Daldry-directed “The Audience” and both parts of “Wolf Hall”).