July 10, 2015
Theater Feature
Excuuuuuse Me! Fighting Back Against the Rude 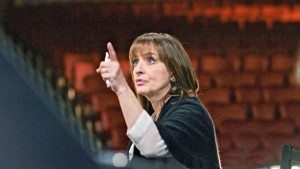 As they do every so often, stories of audience members behaving insufferably at the theater become newsworthy—usually making the papers because some actor or fellow playgoer finally pushes back. For example, in 2013, theater critic Kevin Williamson was sitting at Natasha, Pierre and the Great Comet of 1812 off-Broadway when he couldn’t stand the light of his neighbor’s cell phone one more second. So Williamson grabbed it and tossed it across the room where the offending cellular hit a wall. Its shocked owner smacked the critic (perhaps delighting generations of actors in the process) and threatened legal proceedings, though the incident petered out quickly after that.

It’s a small story but just a glimpse at how often rude behavior has become, if not the norm, then the frequent in our playhouses. This past week, Patti LuPone—an actress who has played Eva Peron, Mama Rose, Mrs. Lovett and Norma Desmond, so, honestly, do you want to mess with her?—was appearing in Shows for Days at Lincoln Center. During the matinee, a cell phone rang incessantly, which she and the audience tried to ignore. Then, during the evening performance, she noticed a patron texting and took matters into her own hands—literally. She snatched the phone and continued the scene. “It was the fastest sleight of hand ever,” LuPone told the Daily News. “We work hard on stage to create a world that is being totally destroyed by a few, rude, self-absorbed, and inconsiderate audience members who are controlled by their phones. They cannot put them down." (And cameras, too, apparently. Theater geeks might recall the actress yelling at a photographer when he distracted her during a night at Gypsy.)

La Patti isn’t alone. At Broadway’s Hand to God, which features all sorts of depraved behavior onstage, a twenty-something theatergoer from Long Island (no jokes, please) saw that his iPhone 6 was low on juice. So he went onstage and tried to plug it into an outlet that was part of the set. “I was thinking that they were probably going to plug something in there on the set,” Nick Silvestri told Playbill.com, “and I figured it wouldn't be a big deal if my phone was up there too." Several security guards yelled at him in front of his mom, and when the video went on youtube, his Twitter account blew up with posts such as, “Moron jumps on stage.” Silvestri was apologetic, though he admitted he found the whole incident a lot more “hilarious” than the show.

All of this makes me think back to some instances of rudeness during my own theatergoing (and theater-critiquing) years. Such as the time at Philadelphia’s Walnut Street Playhouse when two jovial biddies at a matinee were yapping away, nearly oblivious to the musical that was onstage at the time. Since I was nearby, I swatted one on the leg with my stagebill, to which she responded with a healthy shove. Alas, no further escalation occurred.

Then there was the time at an off-Broadway revival of Jacques Brel is Alive and Well when my companion and I sat in front of an obviously tipsy, middle-aged couple on their date night. Shushing them every few minutes was moderately cathartic but essentially useless. Even a stage whispered “will you be quiet?” did little to spoil their fun. Or maybe it did, since during the curtain call, I felt a sharp pain in my lower back and realized the woman had jammed the spike of her high heel into me. My Jewish temper—which can go from zero to sixty on a slow day—kicked into overdrive. Though they made it down the aisle faster than my friend and I, I caught up quickly and, on the line waiting to exit, raised holy hell with the gentleman, who persistently tried to laugh me off. This despite my use of colorful language, my employment of rather interesting terms to refer to his girlfriend, and, on hearing his French accent, certain intimations about France’s capitulation and collaboration during WWII. Since no brawl was forthcoming, the argument trailed off into a few “f yous” and was completed. My friend and I were heartened, though, by several audience members commiserating and saying, “Yes, we heard them through the whole show. They were awful.”

I was less brave, I admit, during an off-off-Broadway staging of War of the Worlds years ago. A much younger couple were laughing and canoodling in front of me throughout the entire exercise. Shushes from me and other audience members did little to distract Romeo and Juliet from their unbalconied pleasures. I even kicked the leg of his seat a couple of times, which just made him turn around and threaten me not to do that again unless I wished to be greeted with some form of bodily harm. When Orson Welles’s war ended in this tiny theater, and the cast took their bows, each and every actor glared daggers at the couple who, of course, took no notice. Upon exiting the venue, I noticed the twosome leaning against a car, giggling and enjoying each other. Had I possessed an X-Acto knife, I would have merrily slit both of their throats from ear to ear, but still shaking with rage and a bit of trepidation, I merely disappeared into the night.

So yes, I, too, have had my nights of audience hell. Such as when a dowager in the balcony at A Delicate Balance complained so loudly that she couldn’t hear, Elaine Stritch called back, “So get a hearing aid and shut up!” (She then advised co-star George Grizzard, “let’s rolllllll it back,” and they started over from the top of their scene.) Or when I attended a late preview of Broadway’s The Lion King--perhaps the biggest event of that Broadway season—and spent much of it gritting my teeth because some proud mom a few rows away had brought her five-year-old, and it was all he could do to stay in his seat—where he would shout and point “Look a giraffe!” and “Mommy, they’re dancing!”

Some audience members defended her and found it wonderful that a child was being indoctrinated into the wonders of theater. Others did not, including one man (bless him) who castigated the mother for letting her brat, who was obviously not ready to partake in a social event involving other humans, partake in a social event with other humans. When he was finished, I added my two cents, though he’d already given her the full ten dollars.

Granted, not every incident is rudeness-derived. There was the time a man in front of me was making little noises and moving from side to side, effectively blocking my 5 foot, 3 inch view. Turned out he was having a seizure, and the medics were called at intermission. Or the time at a Broadway theater when I, myself, began shifting uneasily and nudging my neighbors—because a mouse was scurrying down the aisles.

As technology takes hold, it’s inevitable that more and more people are accustomed to its charms and will forget that theater remains the ultimate low-fi entertainment. After all, when only a few folks carried cell phones two decades ago, the rest of us assumed the callee was either an urgently needed doctor or forgetful dummy. Now, in a 1,200 seat theater, with everyone owning a device, the odds of at least a couple of people missing the cute pre-show announcement about kindly turning off ringers are staggering.

Still, accidental oversights are different from people who talk, text, google, munch, unwrap and snap photos while the rest of us are trying, in vain, to spend two blessed hours away from our digital overlords. It reminds of the first time I saw “Paris, Texas” at a second-run movie theater in my old hometown. The film held me spellbound, even though two ladies in the sparsely attended theater held a running conversation through great chunks of it. When Wim Wenders’s masterpiece ended, I saw the duo collecting their things and thought I’d pay my respects.

“That’s amazing,” I said, “SINCE YOU DIDN’T SHUT THE FUCK UP THROUGH THE ENTIRE FILM!”

The stricken look on their faces as I strode up the aisle remains a deeply cherished memory.