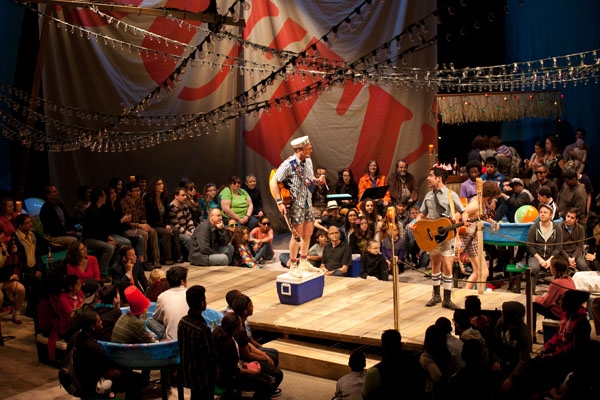 Gilbert and Sullivan’s The Pirates of Penzance has earned an unjust reputation as being a dated, old fashioned show better left as a curio of a time we should remember but not want to relive. What with its tropes of vigorous men, damsels in distress, and imperialism, it seems the opposite of “woke.” Leave it to Sean Graney, artistic director of Chicago based company The Hypocrites, to turn that concept on its head and reveal a side of Pirates that will take many as a surprise. Removing the guilt out of “guilty pleasure” Graney and company have reinvented Pirates as an immersive spectacle set on a beach, complete with a Tiki bar, where audience members can partake in a drink or two and celebrate the quirkiness of Gilbert and Sullivan’s show, while engaging with art in a direct way.

Graney has specialized in developing shows where the audience can roam freely throughout the space and interact with the actors in unique ways. The Hypocrites have taken on the Greeks, the Bard and Arthur Miller, having received glowing notices for the ways in which they approach works that others have deemed as obsolete. The lack of pretense, and the focus on joy by The Hypocrites makes their shows feel like definitive productions, without the snobby baggage that comes with that.

I spoke to director Sean Graney about bringing his Pirates to New York City, how he fell in love with theatre, and why the dynamic between the audience and the art are at the center of his work.

You have such love for the audience which is always at the center of your work, can you pinpoint a moment where you went “wait a second, I don’t like how I’m being treated, I want to be part of what’s going on”?

Ever since I started making theatre in college and I learned about different types of theatre being made through history, and different kinds of relationships to the audience, I felt it was a little strange to go into typical proscenium houses and being told where to sit, having the lights go down, and being yelled at if we open candy. If we laugh at a place we find funny, but nobody else does, we’re looked at strangely. I just thought there were a lot of pretenses that became problematic for me personally, since I wanted to interact with the audience in a new and refreshing way. I’ve always wanted to concentrate on the relationship with the audience and in these Gilbert and Sullivan shows we try to have as much open space as possible so the audience can play with the actors.

To balance that, what’s been your favorite audience going experience?

I can’t quite recall a time when as an audience member I was blown away with how I interacted with the art. I started doing shows where the audience moved along with the actors long before I saw any shows where that happened, I’d heard about it but had never experienced it myself. Once I started directing in that fashion it felt right to me. I don’t want to say it happened at one of the shows I directed because it sounds so masturbatory (laughs) but since then I’ve seen a good amount of things. Mary Zimmerman did a show in Chicago called Eleven Rooms of Proust in which the audience walked around in a warehouse and even if I didn’t get to see it, it blew my mind. 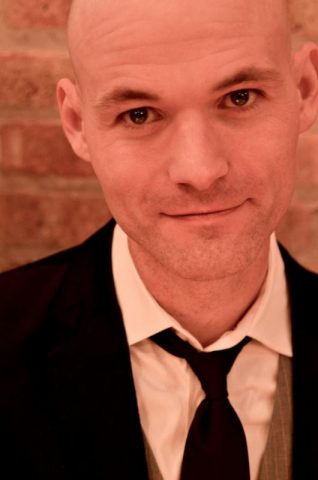 I don’t want to sound like a therapist or anything but do you remember going to the theatre and having your parents maybe tell you “Sean, you are not allowed to touch anything”?

That’s so funny, we didn’t go to the theatre when I was younger, but every time I went to an art museum I was tempted to touch the paintings just because I knew I shouldn’t do it. As a young punk rocker I was drawn to wanting to break those rules, I didn’t like being told how I was supposed to interact with art.

As critics we’re always telling people art is a mirror of who we are, but we’re also the people policing how they interact with it.

It’s strange, you can sell more tickets if people are sitting and you can control the audience better, but once you break that rule and create an environment where someone can open a piece of candy if they want to, everything becomes liberating and exciting. So much of theatre is about the social aspect, we go into rooms with other audience members, strangers with different points of view and from different backgrounds, and to not provide space for audience members to communicate with each other is a disservice.

The Pirates of Penzance is one of the coolest, uncool musicals ever. We are told the musical is old fashioned and yet every time I see it, I have a blast. What did you discover about the piece once you turned it upside down and adapted it to your vision?

The Hypocrites started doing musicals and the audience really enjoyed them. I usually work with classic texts in the public domain and you can have whatever relationship you want to those texts, but most musicals are not in the public domain. I remembered Pirates was but I had so much disdain for it like you said. But I realized I’d never actually listened to it, so my exposure to Pirates was severely limited by what we’re supposed to think of the piece. I read the libretto and I was like “holy shit, this is so smart, witty, funny and subversive in a super polite way” which is clearly weird for modern audiences to think about. Once we started working on it my love for the music deepened, I learned so much just by being in front of Pirates for eight years.

You don’t have a time machine, but are there any enigmas in the libretto you would have loved to ask Gilbert and Sullivan about?

We cut the libretto down so it’s an hour and 20 minutes long with a one minute intermission, so everything we thought was confusing about the libretto we cut down. The script was pretty misogynistic, so we did a lot to take that out, I’m not sure how successful we were, but I like to think that every year we come closer to removing as much misogyny from it as we can.

The show is probably filled with Easter eggs that people won’t necessarily notice since there is so much happening around them. Are there any things we should keep an eye out for?

The story itself is kind of bizarre and topsy-turvy, so the plot points everybody needs to know we repeat several times. The numbers are so great, we love doing "I am the very model of a modern Major-General," it’s so fun, so hopefully everybody will enjoy that.

As director, what’s the most challenging part of orchestrating something that looks so anarchic in traditional terms?

(Laughs) It’s really well ordered, people ask me how do I protect the actors, and my actors go to the supermarket, they know how to interact with people. The idea is we all come into the room with this sort of joyous respect, we’re all welcome and for the most part in all the years we’ve been doing it we’ve never had any instances of disrespect. When you create that welcoming environment you just hope the rules of society will hold up. We encourage people to think about everybody else in the room, while they’re having fun themselves. If you’re standing in front of somebody, move or squat down to let them pass, I want people to be aware of their own goodness when they see the show.

Right, if there’s a lunatic in the audience, the same lunatic would be at a traditional performance too.

If there’s a lunatic our actors are people before they’re actors, they know their safety is the most important thing. If something might happen or if there’s a threat, we’d stop the show, the show doesn’t have to go under any circumstances. This is all about people being conscious of each other, if someone has too many drinks and starts to dip into asshole territory the actors are trained to point it out within the context of the show. The actors are under the scrutiny of 150 other people, so that stops crazy behavior. 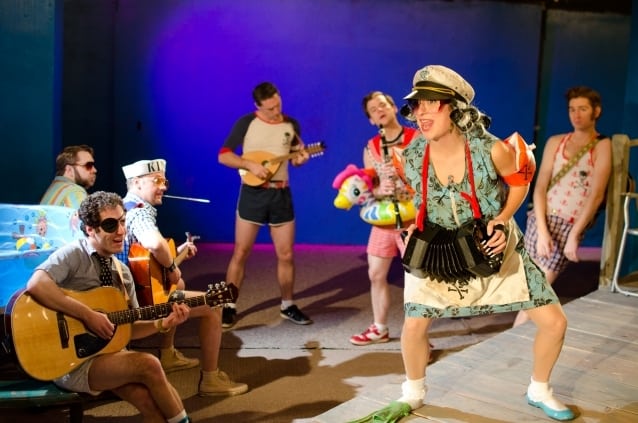 I read about your upcoming Aristophanes marathon, how’s that going?

Great! A couple of years ago we did all Greek tragedies as a 12 hour play called All Our Tragic, and this is sort of a follow up to it. It’s a 5 hour show that will happen next spring.

Let’s imagine tomorrow all the musicals in the world are in the public domain, is there one you’re dying to get your hands on?

Cats is so creepy, I’ve heard people who say they fell in love with theatre when they saw that as kids and the cats touched them. I think if I’d been a kid and one of the cats touched me I’d never gone back to the theater.

(Laughs) They’re in those skintight unitards that are disturbing and sexy. I can’t figure out that show yet but I love it so much, it’s a show about celebrating everybody. It’s basically all these songs going “look how great this guy is!” at its essence it’s a musical about how awesome everyone is.

If you do Cats my request is that you turn “Memory” into a karaoke moment so people in the audience can try to reach that Grizabella note too.

We could see how many people attempt it and how many succeed. That’s a great idea.

For more information on The Hypocrites: Pirates of Penzance click here.