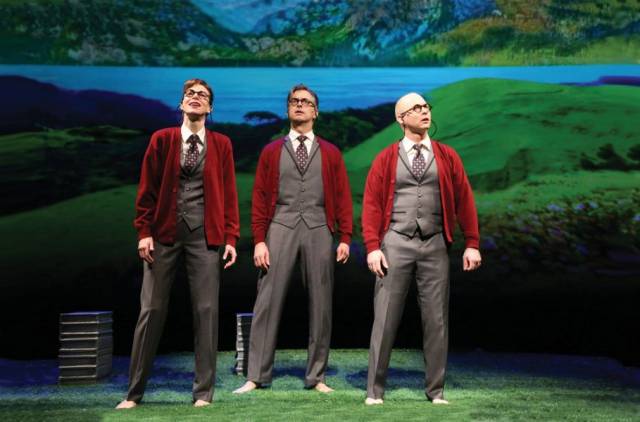 After seeing Fellowship for Performing Arts' moving adaptation of C.S. Lewis’ profound novel The Great Divorce, playing at The Pearl Theater, I had the chance to speak with Max McLean, who adapted the novel along with playwright Brian Watkins.  Mr. McLean is also Artistic Director of FPA, a producing organization that creates theater from a Christian worldview that engages a diverse audience.

In the novel The Great Divorce, a group of characters take a bus trip from Hell to Heaven.  As the story unfolds, C.S. Lewis continually asks the provocative question: if given the freedom to choose Heaven or Hell, what would we really do?  Are the gates of Hell locked from the inside?  How did you take this novel, which contains a lot of narrative, and dramatically adapt it for the stage?

It was a very challenging piece.  You have to make a distinction between Lewis’ vision of the Grey Town and his vision of the outskirts of Heaven; enough for the audience to move forward with the conflict in the play, which is whether each character chooses to stay or go back to the Grey Town.  So the big idea was to use video, because we felt that was the most efficient way to give the sort of the narrative descriptions of these two places and to clearly establish and visually keep these two places in front of the audience.  We also felt we had about ninety minutes to tell the story, because as you know it is a very dense story with very complex ideas and emotional choices.  So video and ninety minutes were the two caveats that we wanted to go with entering the adaptation process.  And we also wanted to tell it with a small cast of really good actors.  One of the great things about theater is how interesting it is for actors to switch characters with a change of costume or a new accent and when it is done well it is so fascinating to watch.

How did you and Brian Watkins work together?

Brian wrote the first draft and was very involved during the long lab process we had getting this ready for the stage.  And then I got very involved after the lab and did almost all the rewrites afterwards.  So Brian got the ball rolling and I took it from there.

What other decisions did you make going from page to stage?

It was hard.  One of the things is that we didn’t want the narrator to be 1940s British.  We thought that it was important to give him a kind of American colloquialism.  We definitely thinned out the language.  We couldn’t tell all the vignettes in the book, in an earlier draft we had many more but it felt a bit repetitive so we decided some had to go.  And of course, people were like, “why didn’t you have this or that one in?”

Yes! I really missed The Tragedian!

That character was in an earlier draft!  There are two characters that folks comment the most about missing and I understand why they’re missed, the Bishop was one and the Tragedian is the other.  And of course then there is the trick about having the Tragedian disappear; we would have had to figure out how to do that on stage!

The direction for The Great Divorce was so imaginative and precise, in some places choreographed.  How did you choose your director Bill Castellino for this production?

Bill consulted with us on The Screwtape Letters.  So when Brian and I did an early reading of the play, you know how those things go, you do readings in your living room, we invited Bill and John Gromada, who did our sound, which I think is just brilliant, both of them had worked with us on Screwtape [The Screwtape Letters].  And so their reaction to the piece and their comments about the piece, both good and bad, just struck us and Brian and I said, "yeah, they get this."  I knew Bill personally, and in the theater you know you like to work with people that you’ve worked with in the past.  And Bill does have a choreography background.  I kind of felt that with a fantasy like The Great Divorce we do want to have elements of naturalism and elements of fantasy in it and so having places that are highly choreographed helped to tell the story.  And your comment about precision is something we’ve heard before.  Words like precision, efficiency.  To me I just love those kinds of words, they help greatly in the telling of a story.  The flip side is if you get too precise you kind of lose the emotional, but we wanted to give enough room for the emotional element to be there as well.

The entire story is told by three actors playing eighteen characters.  How did the actors approach this challenge?

The challenge was to be distinct.  We asked the actors to bring stuff to the table and then we’d say that works, that doesn’t work.  At the auditions we were looking for actors that had done shows like The 39 Steps or [Around the World in 80 Days].  You know these character actors who have that ability to shift their voice, costume, their physical appearance with just a slight tonal or body change.  And then the audience takes that suggestion and fills in the rest. 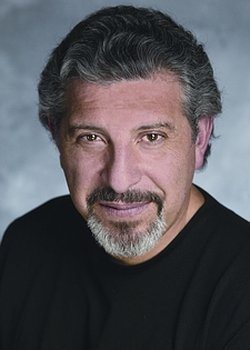 All three actors had that great chameleon quality!  Broad and subtle strokes.  For example the character of the Grumbler.  That was a very fast character.  Christa Scott-Reed did a fantastic job of giving us so much detail in such a short time.

That little sixty second cross across the stage is one of the highlights of the play.   Having these quick changes happening throughout the show kind of illuminates the metaphors and big ideas that Lewis uses, you can be a ghost or a spirit, a lizard or a stallion.  Depending on the choices you make in your life.

They always say that 90% of the decision making is picking the right people!   John Gromada is a genius!  He really listens and has this extraordinary gift for composition.  You kind of just let people like that go and deliver. Amazing the experience also that Kelly, Jeff and Michael brought to the table.  They resonated with The Great Divorce in a way that completely helped tell the story.  One of my favorite moments where all elements work together for the good, is when the bus arrives.  And another moment similar to that, when they are off the bus and they have this kind of warp speed explosion and they go into deep space and then hit the abyss and land in the new world, I just find it so fantastic.  It takes you on this wonderful journey.  The designers all paid careful attention to Lewis’ imagination.

Are there other authors besides C.S. Lewis that you are interested in bringing to the stage?  Do you ever work with new original material?

Of the four shows we are doing this season here in New York at The Pearl Theater, three of them are Lewis based and the fourth is not.  The fourth is an original work called Martin Luther on Trial.  It is also a fantasy, takes place in the afterlife.  You know the 500 year anniversary of the Protestant Reformation is 2017, so there’ll be a lot of Luther commentary in a big way.  And so we thought let’s examine theatrically Luther’s legacy in light of the anniversary and what has Luther wrought.  Did he liberate the Gospel or did he start the scandal of a splintered church?  You know Luther has both of those things attached to him.  There is also an attachment of Luther and anti-Semitism that we felt we had to deal with.  We are working from a Christian worldview, and dealing with things that cause division and strife because our world is not what it ought to be.

Are you using any historical documents?

Luther like Lewis has many surviving writings and of course there are many fantastic resources to draw upon.  Martin Luther on Trial is written by Chris Cragin-Day.  We sent her over to Germany to do some research.  This play is in the development stage, so it won’t be reviewed but we hope to do a full production of it next fall.

I commend you for producing a women playwright!  Any other authors of interest?

Well we’d like to have another season here in New York.  There are some G.K. Chesterton pieces I’m interested in.  I really like Christopher Marlowe’s Doctor Faustus, there’s something about that story that I’d like to look at.  But there’s a lot with the Lewis canon, he’s sort of my George MacDonald!  You kind of gravitate to who you like.  Obviously we want to explore the religious themes, because we feel like that is our niche and not too many people are doing it.  That’s where we want to go!

Performances of "The Great Divorce" continue through January 3 at the Pearl Theater.