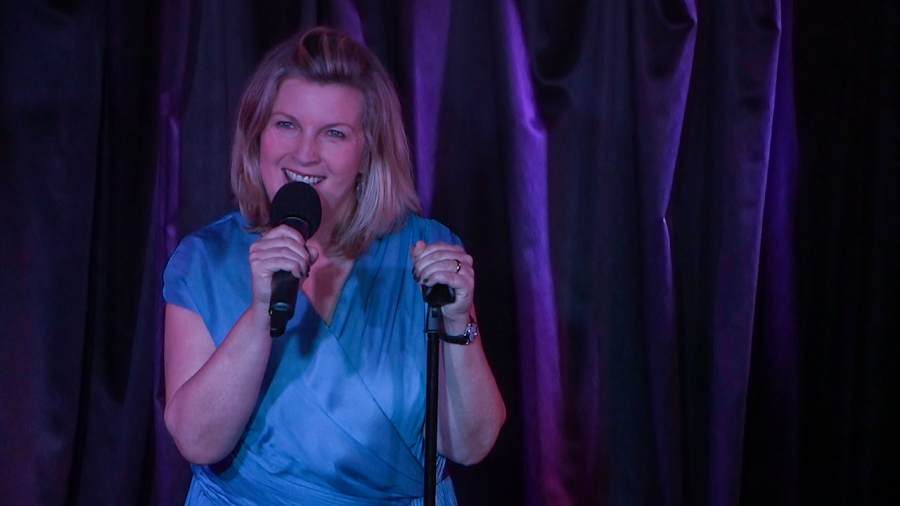 Singer Susanne Mack’s new show WHERE I BELONG, playing at Pangea, the best cabaret room in town, is a diverse mix of song and story that continually emphasizes our basic human need for authentic connection to both place and people. Ms. Mack knows something about belonging. In the opening moments of the show, she proudly announced she’d just become a legal resident alien, having emigrated from Germany to New York in 2008. She also spent 10 years living in Switzerland and enlightens us on the differences between the Germans and the Swiss, including a sweet story about being a kid straddling the dividing line between the two countries on a bridge over the Rhine River, having one foot in Germany and one in Switzerland. This is a great metaphor for what she delivers to us in WHERE I BELONG. With songs mainly from the 1960’s and 1980’s, ranging from Joe Jackson, The Beatles and David Bowie to obscure gems the charming Ms. Mack sings with sincerity and a warm open heart, musically bridging the voids of being lost or separate. Her voice is an appealing mixture of huskiness in the lower register and sweetness on her high notes plus an occasional natural quaver, adding vulnerability to her singing. And she is fortunate to have the wonderful Paul Greenwood as her musical director and pianist, who also contributes the occasional back up vocal.

Ms. Mack begins with a combo of “Shiver Me Timbers” (Tom Waits) and “Small Town Boy” (Jimmy Somerville and Steve Bronski) with the perfect lyrics “the answers you seek will never be found at home… run away, turn away” underscoring our need to go and find out where we belong. Singing with simple tenderness, Ms. Mack follows with the story of Patty Larkin’s “Helen” and the power of place. Place is also echoed in an evocative “Heroes” (David Bowie), coupled with stories about the Berlin Wall and the stirring “Heart in New York” (Benny Gallagher/Graham Lyle). She and Mr. Greenwood don shiny sunglasses for a fun rhythmic “Jet Set” (Joe Jackson) exclaiming “get out of our way!” as they become those tourists we New Yorkers love to hate. More good grooving happens in Des’ree and Ashely Ingram’s “Gotta Be”, the only number that I longed for a bit of percussion.

Ballads filled with anguish and longing are the highlight of WHERE I BELONG. Whether investigating the fear of being seen and the desire to be someone else in “Where Do You Go To, My Lovely?” (Peter Sarstedt), an aching song in three quarter time, with Mr. Greenwood’s exquisite accompaniment or the haunting “No Milk Today” (Graham Gouldman) that uses the metaphor of milk not being delivered to express loss, Ms. Mack takes the audience on a journey; telling the story, painting the pictures and living the emotions underneath. Skillfully directed by two accomplished cabaret veterans, Barb Jungr and Tanya Moberly, their guidance is visible as Ms. Mack weaves effortlessly between story and song; at times we don’t know where one is finished and the other begins. This is especially true as she tells a profound story of being very pregnant and finding herself protecting a child on the street from bullies. Then she beautifully melds into “Blackbird” (John Lennon/Paul McCartney. We are all illuminated by how powerful it is to step up to our “moment to arise”.

Starting with running away and ending with coming together Ms. Mack convinces us in the anthemic “We Belong” (a hit for Pat Benatar written by Eric Lowen and Dan Navarro) that belonging is about connection. The radiant Ms. Mack in WHERE I BELONG does what cabaret does best; bringing together the personal and universal.

Support TabeTomo as They Support the Hospital Work...
Review: Macbeth at CSC
Don’t Miss Brian Stokes Mitchell at 54 Below...
Review: Isaac Sutton at 54 Below with Ali Ewoldt &...