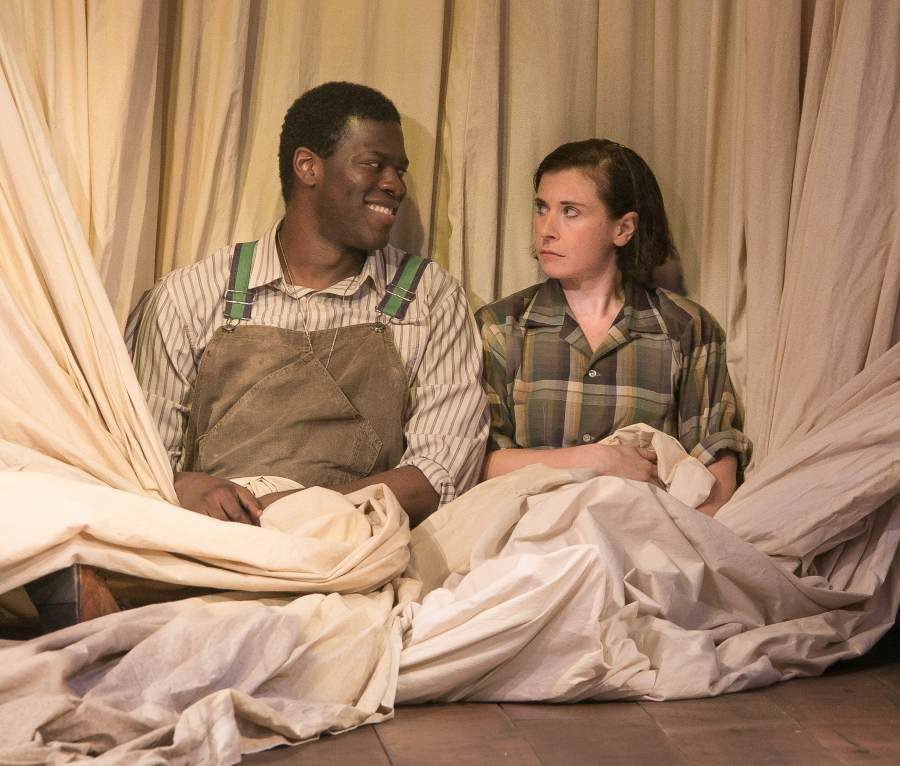 John Doyle's new CSC production of As You Like It features Hannah Cabell in the role of Rosalind: one of Shakespeare's most indomitable and beloved heroines. The production also features original music by Stephen Schwartz and a diverse cast of Broadway and Off-Broadway alumni. Midway through the production's run, Hannah Cabell chatted with us about her approach to playing Rosalind, how much she enjoys Stephen Schwartz's music, and that one time she got caught in the middle of a communist-fascist skirmish in Italy.

Rosalind is one of Shakespeare’s most famous heroines, and a lot of different actresses have played her over the years. How did you approach the role? Did you look at what other actors have done or did you just try to make it your own?

Well it’s funny because we use the Arden edition of the script and in the beginning of that edition there’s a long, long essay about all of the actresses that have played – I mean not all of them – but many of the famous ones that have played the role over the years. And one thing that stuck out with me in that essay was that some of them would get the Rosalinds right, and some would get the Ganymedes right, but it was very hard to get them both right. So I tried to ignore that and I just approached it on my own. I’ve seen it maybe a couple of times but not enough to have had someone else’s rendition of it influence me. I also played this part six years ago in Florence, Italy, actually. So I did have that under my belt; but of course this is a totally different production. But it was helpful, I have to say, to have studied it in depth once before, because it allowed me to go even deeper this time and explore things that I either hadn’t thought of or hadn’t had the time to explore last time. And I’m still finding stuff, I’m still exploring. I mean one of the most amazing things about a role like this is that you could play it forever, and you’d find even more and more things.

Is there a certain element or scene in this production of As You Like It that you especially enjoy?

I do love the music. I think Stephen composed some gorgeous, gorgeous music. I was a little bit reticent when John told me it was going to have all this music composed for it, because I think the play is so beautiful that I think you just need to let plays like this stand on their own, usually. I don’t like a big concept put on a play like this, because it’s so beautifully constructed and the language is so gorgeous: I just want the audience to be able to hear that. But, that being said, when I heard the music and when I saw where they were placing the music, it actually excites me and makes sense to me -- to have the love letters be set to music -- you know, it gives it a different feel, definitely. But I feel like it’s still in the world of what Shakespeare intended. And John and Stephen decided to do the music for it because Shakespeare wrote more songs, more lyrics, for this play than for any other play. But that’s one facet of this particular production that really excites me.

And then I love John Doyle. We did Three Sisters together some years ago; and I just really love working with him, and I believe in his vision and his process. So that was a real joy, too.

You’ve done some playwriting yourself, haven’t you?

Is that something you’d like to do more of in the future?

Yes, I love creating new pieces. Playwriting as a solo art is hard for me, because I get a little lonely and I like bouncing ideas off of other people. So there are some friends from grad school who I’ve written some pieces with. I would love to do more of that. My husband’s a playwright and a screenwriter, so I really enjoy helping him brainstorm or edit or cut. It is very satisfying to me. So, yeah, I would love to do more of that in the future.

I think I read somewhere that you have a degree in Russian literature and theatre.

Oh my god, well, all of Chekhov - I mean, that I can, and more. Like I said, I did Three Sisters with John, but that’s the only professional production of Chekhov I’ve done. I did Cherry Orchard in undergrad. And he’s my favorite, or one of my favorites, of all time. So definitely more of that. I’d like to explore some new Russian plays: to be honest, I don’t know that many. But it would be interesting to me to learn more about it.

Rosalind’s romance with Orlando gets a little bit awkward at times. Do you have an awkward story about a relationship that you wouldn’t mind sharing?

Well, here’s one: it’s sort of awkward, but sort of just a strange story. So I dated a fellow actor who’s now very successful, all through undergrad at Oberlin College. And when he was done with his senior year, I was still a junior, we went backpacking around Europe. We were in Rome, and we were just hanging out this one day in the piazza. Across the piazza we noticed some people gathering, and we noticed a sort of protest, people with signs. We were trying to see, and all of a sudden we saw chairs starting to be thrown into the air, and people shouting, stuff like that. And more and more people were coming in, more and more people were fighting, and all of a sudden the trucks came roaring into the piazza. This was like 15 years ago or so. These trucks came roaring into the piazza and these policemen came pouring out and shooting what we think were rubber bullets, all around: into the air, and, I don’t think into the crowd, but it was terrifying, and so we ducked underneath this bookseller’s stall and then we ran to this side street. Here we are, two collegiate backpackers, nothing with us. We ran to the side street and it turned out that the communists and the fascists had both been having parades that day, and they happened to bump into each other in the square, and this whole melee ensued that we were caught in the middle of.

I know you enjoy doing comedy, and my favorite thing about you is that you used to be in a sketch comedy group called Bad Astronauts.

Is there anything you do specifically to bring out the comic elements when you’re performing Shakespeare?

That’s a good question. Well, you kind of have to make it as clear as possible. You know, I don’t think it’s that different, to be honest, from playing modern comedy. You kind of have to understand the math of it: comedy is really mathematical in terms of the set-up and the punchline, or the number of times something gets said, or the amount of space that gets left between two lines. I feel like if I think about it as Shakespearean comedy or clowning it makes me really nervous and feel like, “Oh god I can’t do that.” But if I just approach it like I do any other comedic play, then I’m OK. And of course a lot is about reading the audience, too: what they can understand, and what they can handle pace-wise. That’s a little different, obviously, than modern comedy. But in general, it’s pretty similar.

In Manhattan at Classic Stage Company

In John Doyle’s pared down As You Like It, opening Classic Stage Company’s 50th season, the forest of Arden is not filled with trees but rather a grove of globe-shaped lights hanging from the theater’s rafters, a brick wall with a small overhanging second level, a couple of steamer trunks and a piano on wheels.  As both director and scenic designer, Mr. Doyle has put the emphasis in William Shakespeare’s pastoral comedy on imagination, music and the actor-audience relationship.  In addition to shortening the play by eliminating scenes and characters — the performance runs 100 minutes without intermission — Mr. Doyle shakes up the casting.  The company of ten actors, some of them taking on two roles and supplying superb live music, includes Ellen Burstyn playing the melancholic Jacques with a Chaplinesque presence, wryly tossing off lines of text like “I can suck melancholy out of a song as a weasel sucks eggs” to the delight of the audience. Her understated, quiet “All the world’s a stage” speech made us lean in so as not to miss a word or image. As You Like It embraces the themes of love and forgiveness; life has to get messy before the happily ever after comes.  Rosalind, a for …Read more

Review: Classic Stage Company’s ‘As Yo...
Review: Macbeth at CSC
Review of ‘Carmen Jones’
Review of ‘Light Shining in Buckinghamshire&...