NYC theater production company InProximity recently announced the line up for Project W, a theatre festival featuring five days of play readings written, directed, and produced by women. This celebration of women in theater extends even to the management and press teams, all of which are women as well. Shortly before Project W launches, InProximity's co-founder and co-artistic director Jolie Curtsinger took a moment to chat with us about how this project came about, why she and fellow co-director Laurie Schaefer founded InProximity, and shifting the societal paradigm to feature more women in theatre: both on the creative and business side.

So first of all, I wanted to ask how Project W came about.

A reading series is something we’d talked about over the last few years. We’ve started developing new plays and working with writers, and part of that process is obviously a reading. And so it’s something we’ve been kind of mulling over. And then watching the movement to showcase more works by women recently has been exciting and something we wanted to be a part of. The response when we started reaching out to people was really encouraging. So we decided to not stop at presenting female writers and directors but to also take it to the next level. We went with a female press team, general management, stage management and we realized across the board that we wanted to cover all aspects of the theatre industry and bring together the business side and the creative side of all women professionals. And it felt right to put the whole thing together in a festival format instead of spreading it out over months. There’s something really celebratory about a festival and that’s what we’re doing – celebrating women in theatre.

What were you looking for when you chose scripts and why did you end up choosing the ones you did?

So we put the word out, and we started getting an influx of scripts. We didn’t get a ton of them. But it was really awesome, the quality of the plays that were being submitted. One of the things that we wanted to do was to have an entertaining night of theatre for people in the industry as well as theater fans. Most of these plays are production ready or super close to it. And that was important to us. We wanted plays that were new to New York City, that haven’t had a full production here or a highly publicized reading. These are plays ready to pop. And so that’s exciting for us: giving them a platform.

We wanted to make sure that there was a really wide spectrum of subject matter. Every play really does have its own strength, its own voice and takes risks. As a company we’ve tried to do that, and so that’s kind of the thing that we’re drawn to as producers. If someone came all five nights they would be hearing completely different stories from very different perspectives, and that to me is really cool.

That’s cool that you can get such a different range of plays.

We did get some really great plays that were works in progress. It inspired me to start a development lab. So I have a couple pieces that I kind of put aside, and we decided that we’re going to start an InProximity development lab this fall, to work with the plays that are so close but they just need a little more work and I want to support those writers in their process. So the festival inspired this whole other venture, which I’m really excited about.

So how did you kind of transition to becoming a producer, and what attracted you to that role?

My partner Laurie and I met each other - I think fifteen years ago, sixteen years ago - in L.A. We were both actors and we were part of a theatre company out there. A group of us kind of ventured off and started our own little theatre company, and Laurie and I ended up producing a show that we were also starring in. You know, we used to sit back and laugh about how one day, we should do this in New York. Theatre in L.A. is very different. We kind of lost track for a couple years, and reconnected when we were both in New York. We got together and we decided to start a theatre company. We both loved being on stage, but creating theatre is really exciting on a totally different level. It flexes a different creative muscle. And it’s also just really fun to bring together actors and directors and designers we really like and make something special together. So that’s kind of how it started. And then the beast grew from there. (laughs) It’s been a really fun ride.

OK, so I did a little research on Broadway shows that are playing right now. And I discovered that out of 33 shows currently playing, only nine of them have women writers. And only three of them were written exclusively by women. So I was just wondering if you had any thoughts on that, or why you think that is?

I just think it’s an old paradigm, that we’re part of a larger movement trying to shift right now. Right now its about creating women teams, power teams. And as they rise up, you’re going to see that shift, that tide just kind of shifting in the other direction. When I started reaching out to these writers, a lot of them already had a female director they wanted to work with, or a short list of female directors they wanted to work with. We recognize we’re all in this together. We are the change. We have to be.

What do you think we can do to encourage more women teams in the theatre?

Don’t stop at the first rejection. Keep going. Find people who believe in your work. Just keep putting yourself out there. Look for companies like ours that have missions that align with yours. If you want to be on the business side of it, look for companies that have female producers and female artistic directors. PROJECT W is just one of so many events and organizations across the country – The Kilroys, The Women’s Project, Wit Fest, The Bridge Initiative (our friends in Arizona), The Future is Female Festival - just to name a few. Too many to name – but isn’t that great? We are so honored to be even a small part of the movement.

So I was inspired by the fact that you have a successful theatre career but you’re also married with children. 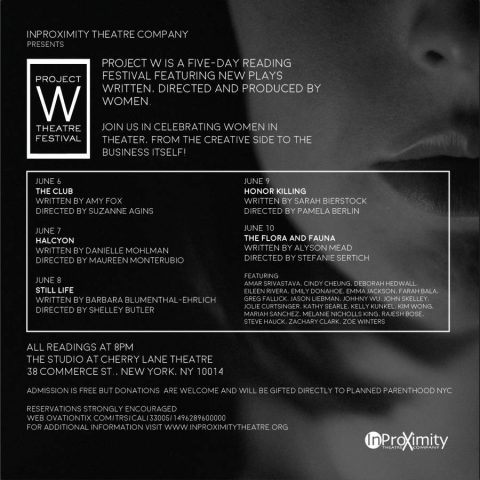 Right. Well, I mean, I think there’s no doubt that we can have it all. I think finding something you’re passionate about and love doing makes the time away from your kids or the time you’re busy a lot easier. I love the fact that my kids and my husband – get to see me inspired and creatively satiated. And they’re so incredibly supportive. And that’s really helpful obviously. But I think just believing that you CAN have it all. If you have something you love to do, a job or career that makes you happy and fulfilled, then it's worth all the hard work and exhaustion to find the balance. For me, it makes me a better wife, a better mom and better human. Digging deep into the things that matter to me: my work and my family - that's what makes me whole. But that's not everyone's journey. And that's perfect too.