In William Nicholson's play Shadowlands, Oxford scholar and Christian writer C.S. Lewis (known to his friends as Jack) meets the much younger and much more abrasive Joy Davidman. Joy is a Jewish New Yorker, ex-Communist, and Christian convert; and at first, it seems the two couldn't be more different. In fact, it's only when Joy is diagnosed with terminal cancer that Jack realizes how deeply he's fallen in love with her. We caught up with Robin Abramson, who plays Joy opposite Daniel Gerroll's Jack in the first New York revival of Shadowlands (directed by Christa Scott-Reed), to talk about the real life Joy Davidman, Shadowlands' delicate balance of comedy and tragedy, and which C.S. Lewis book is the best. Much like Joy herself, Abramson proved delightful.

I know you read up a lot on Joy in preparation for this role. What about her most impressed you?

Joy had a photographic memory. At a very young age, she was the kind of person who could read a piece of music over one time, and then put it down and sit at a piano and play it. She was absolutely brilliant. She scored off the charts in IQ tests at a very young age. She also got accepted to Columbia University in the late '30s, and very few women, let alone Jewish women, were accepted into Masters programs at Columbia University. Nothing stopped her.

Your onstage chemistry with Daniel Gerroll is basically magic. Did you have to work at that, or did it just come naturally?

No, I don’t think that we had to work very hard at that. I’ve always loved his work so I respected him immediately. And during table work, the first week of rehearsal, he was just so warm and charming and kind and funny and thoughtful, in our discussions about the play and who these characters are. I was sort of charmed by him, so once we got on our feet and were looking in each other’s eyes and holding each other’s hands, it wasn’t that hard. He’s sort of a magnetic person and I think I just feed into that.

What do you think it is about Lewis and Joy’s relationship that makes us fall so much in love both with them and with the relationship?

Well, I think that the same thing that happens between lots of people when they fall in love, is that they’re very different, in many ways. When you first meet them, their personalities and the way that they carry themselves are very different. You wouldn’t necessarily match them up if you saw them sitting together, with the way that they behave: she’s sort of brash and outspoken, and initially disliked by people because she really just didn’t have a filter, and I think she offended people. And he’s much more careful, and thoughtful and quiet. So you wouldn’t necessarily match them up. But I don’t think that they very often met their matches intellectually. I think that they’re both incredibly brilliant people who probably went through life waiting to meet people who were equally as brilliant as they are. And I don’t think it happened very often. And they found that in each other. And it’s fun to watch them challenge each other, and it’s fun to see two people who are so different fall in love. It’s really fun to watch. Juicy. Satisfying.

This show has some great humor, especially in the first act; but then of course it’s also very sad. How do you balance those moments of comedy and tragedy without undermining either side?

That’s a really great question. I couldn’t tell you how I do it. And, to be honest with you, I think we still struggle. I’m trying not to read reviews, God help me, but that is something that is a trap that, I think especially Joy can fall into. Because she is funny, and I think that’s one of her defense mechanisms. So it is hard to find the balance between when Joy is cracking a joke and covering up for something that’s too difficult to talk about. And also sometimes I don’t think that she’s even trying to make people laugh: I think it’s the way that she is. And it’s funny to watch Jack respond to her outrageousness. That’s where the humor is sometimes: not in what she’s saying, but in his response to her. So, I’m not going to lie, it’s a challenge. Without giving anything away, one of my favorite scenes in the whole play is the beginning of the second act, when he [Jack] comes to see her at the hospital, and it’s really tragic, what might happen to her. And she cracks a joke, because that’s what she does, it’s how she gets through life. And it’s beautiful. I think that there’s beauty – it’s one of those things where you can laugh and cry at the same time. That’s what I’m hoping for.

William Nicholson’s script for Shadowlands is beautiful, but it’s also very sharp. Do you have a favorite line?

Well, I have a million. But Joy’s favorite line is when she just levels Christopher at the Christmas party. He says something like: there’s a difference between males and females -- where males have intellect, females have souls. And Joy without missing a beat, says: “Professor Riley, as you know, I’m an American. And different cultures have different modes of discourse. I need a little guidance here. Are you being offensive or merely stupid?” What I love about the line is that, first of all, she didn’t even have to think about it. Second of all, she really wants to know. I think that it’s a genuine question: are you trying to offend me or are you just stupid? (laughs) 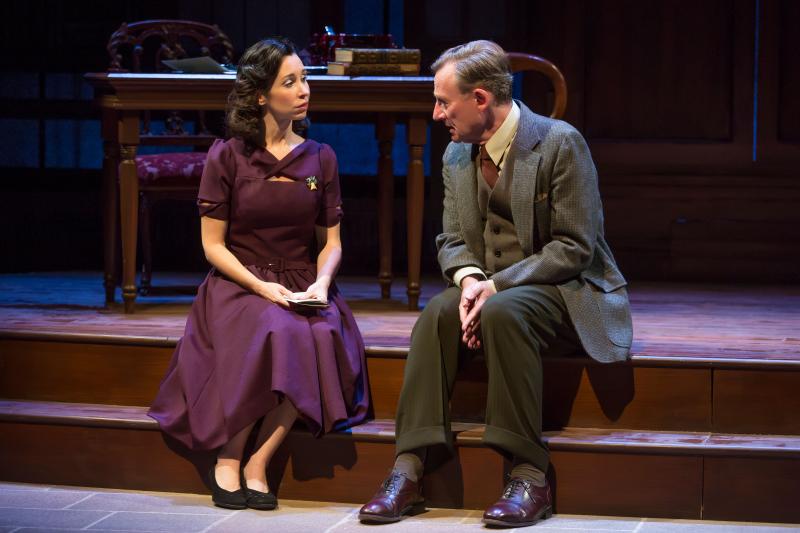 This show has a lot of cool staging moments; I know I got chills each time the wardrobe opened up. And you’ve said elsewhere that you really love Christa Scott-Reed as a director. So is there a certain staging or directing choice in this production that you really love?

There’s a moment that we all kind of came to together. And I think it was Christa’s, she had so many beautiful ideas about this play. But, Joy sort of creeps in when she comes back to England to surprise Jack. She sort of creeps in, and he doesn’t see her, and you’re not sure if she’s a figment of his imagination until she steps in further and says, “Remember me, Jack?” And you realize that she’s there, she’s come back to live there and to be with him. I think it was collaborative, but it was this idea that: are his thoughts making her appear? Or is she just appearing in his thoughts? And Christa and Daniel [Gerroll] and I really talked through that a couple of times. And it sort of gave me chills every single time we thought about it or worked on it or talked about it. That’s an example of one of many moments where I think Christa really had a good idea of the story that we were trying to tell and how we could make it even more powerful.

The wardrobe in the second act -- and the music, and the magic, and the lights, and the sounds -- I know that she worked really hard on that and it paid off. She gave into the magic, she was like, “I’m going to go all the way. We can’t be scared of this. This is C.S. Lewis. These are the kinds of worlds that he created.” So she really went all the way with that and it paid off. And her vision was beautiful there.

Have you read any C.S. Lewis and do you have a favorite work of his?

I read a couple of the Narnia books. And I read A Grief Observed, which is what inspired the Shadowlands story. I loved A Grief Observed. It was really powerful. Fortunately, I have not lost somebody very, very close to me. So that was enlightening for me. 'Cause it’s a journal: he basically just journals about what his life was like within the days, weeks, months after her [Joy's] death. And so it was really powerful.

I had read The Lion, the Witch and the Wardrobe years ago, and I reread it about a week before we started rehearsal. I was sitting in a Starbucks in Tribeca. And I thought that I would just read the first chapter or two and then it would take me a couple days to finish it. I sat for two hours in this Starbucks in Tribeca and I sobbed. And I’m sure to the people getting their coffee and their croissants sitting next to me, I must have looked like a crazy person. I read the whole thing from beginning to end and I just wept. Yeah, so: The Lion, the Witch and the Wardrobe. She [Joy] says it in the play: she says, “the best.” And I do think that it is.

What do you hope audiences take away from your portrayal of Joy?

I hope that they’re reminded of their own lives, and maybe of falling in love and of taking a risk. You know, you can’t predict the future, so sometimes you have to just dive in and trust your gut, and let love lead the way. And I think that that’s pretty universal, lots of people have gone through that. And also a lot of people have lost people: loved ones that are close to them. And of course it’s tragic and it’s painful, and there’s suffering. But there’s something quite beautiful about caring about somebody so much, loving them so much, that that loss hurts as much as it does. That can be beautiful. Of course it’s tragic, but it can be beautiful. So I hope that the story reminds them of both falling in love, and possibly focusing on the beautiful things about loss as well.