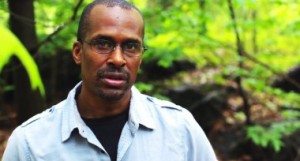 Playwright Keith Josef Adkins, co-founder and Artistic Director of The New Black Fest is provocative to say the least.  His work often explores the many facets of the black diaspora and sheds light on false preconceptions.  With his new play presented at Rattlestick Theater, he does something quite unique diving into a small community many would assume is totally fictionalized.  Directed by Leah C. Gardiner, Pitbulls is a play centered on a small community bearing universal appeal.  Adkins spoke with us about his inspiration, symbolism within the play and what he would like audiences to take away from the play.

What is the inspiration behind Pitbulls?

I'm from Cincinnati originally, my family have been in the southern Ohio, northern Kentucky area since the 1780's.... We've been there, a few people of color that were not enslaved in the area, we were free, and over the years the families migrated to the the bigger cities and there are still family that stayed in these remote parts of the area along the Ohio river.  I have relatives in that area.  For an outsider they are basically Appalachian, everyone sounds the same and they pretty much live the same as far as resources and jobs but usually live isolated.  If there are any black people around they live in the same area and they are usually two or three percent of the population. A part of me was interested in looking at them close up and not judging them.  I grew up in the suburbs of Cincinnati and on my street one of my neighbors had a pitbull farm in the back of his house.  They fought dogs every Saturday when I was growing up from the age of 9 to 18 when I went to college.  I grew up listening and seeing those dogs.  I wanted to tell the story of these isolated people.

Do the pit bulls symbolize anything?

I didn't set out to write anything symbolically but as I was writing and looking at the story I realized that the pitbulls... particularly when you have a group of people who are marginalized, institutionally marginalized, economically and socially marginalized, particularly in the black community and poor, the black poor... there is a lot of silencing.  A lot of things aren't shared.  The situation of Ferguson is an excellent example of a marginalized group of people speaking up and standing up for themselves in a very bold way.  I don't think we've seen anything like that since the Civil Rights.  In between people don't feel like they have a voice and somehow these pitbulls fighting and the raising of them to fight is an extension of how people feel about how they're treated and made to feel about themselves.  It's a way to express the rage.  In a way the pitbulls symbolize an internal rage within the black and often poor community. 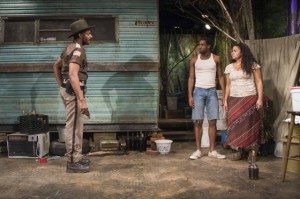 How has the play developed for you over time?

I wrote an early early draft of this play maybe 7 years ago.  It wasn't what it is now.  I picked it up maybe 3 years ago and started really honing in on it. I've had readings and a workshop of it at the Lark.  I've been able to focus on what the story is, be clear about the characters and what they want, cutting off the extra fat in the way of the storytelling.  The play has grown a lot, even when we had previews.  It's great to see how it works in front of people and you realize some things are not needed.  Between the last preview and opening I made some cuts and rewrites.

What's your observation on family structure, as it relates to the mother and son dynamic?

What's important for me particularly in this story, as we talk about Mary and her son, it was important to create a mother whose love was unconditional and what she expected from him.  She felt that she had all the right answers, she thought she knew better than anybody.  The underbelly of unconditional love was that she wasn't able to let him go.  She didn't trust that he could be independent outside of her.  We hear about mother and son relationships where the mother is overbearing, she wasn't that way, she just wanted him to be like her.

I definitely wanted to show the complexities of someone who believes they have all the right answers.  Even if you think you eat organically, have progressive ideas about politics and society, you can also be at fault and have flaws.  You can also suffocate people with your ideas.  I wanted to show she was a complete person, and even someone who deems themselves as perfect can also have flaws.

What would you like an audience to walk away after viewing this play?

I would want the audience not to be judgmental about these people.  They see those imperfections in the characters and see the same things in themselves.  Sometimes it can be dangerous to be so absolute about things, being right all the time.  It's a danger to not accept your fault and everybody has a way of loving each other.  Love doesn't have a particular look.  It can only be measured by the person who is loving.