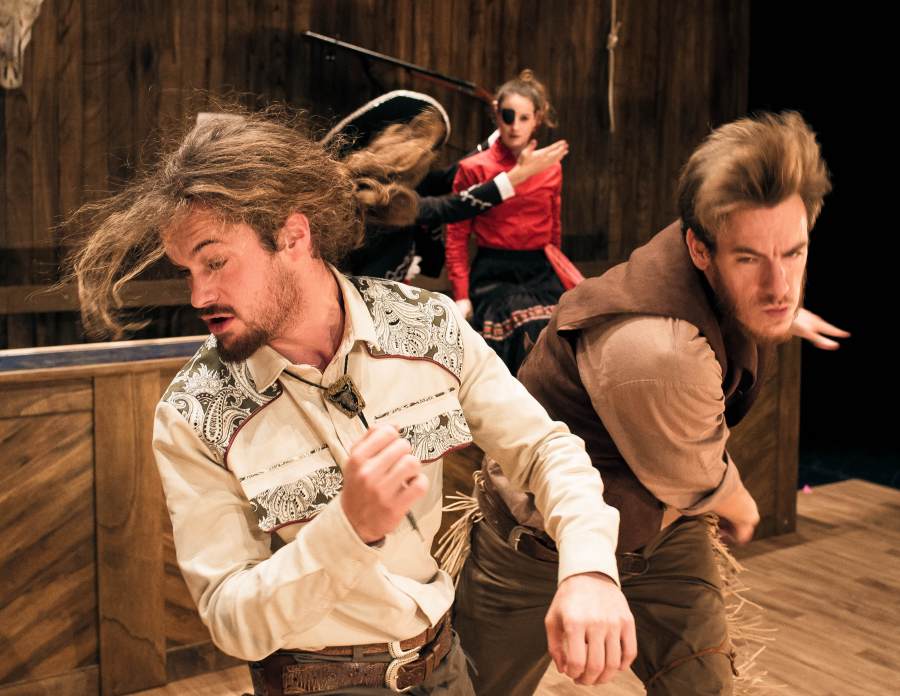 New York based theatre company Nature Theater of Oklahoma have become experts in capturing the essence of Americana in shows like Life and Times as well as their podcast OKRadio in which they speak to other artists about their creative process, spirituality and politics. Their latest work Pursuit of Happiness, making its US debut at the Under the Radar Festival, sees them play with genre and the idea of the American Dream. In our interview with Kelly Copper and Pavol Liska (who answered the questions "as a unit" via email) they discuss the themes in the show, working with Slovenian troupe En-Knap Group, and why cowboys aren't necessarily just a thing of the Old West.

“The pursuit of happiness” is at the center of all your works so far. Why give this title to this particular show? Is it the “ultimate” Nature Theater production in a way?

I actually don’t think that the pursuit of happiness is at the center of all our works, so – I would not say that. What this work is, is a step in a new direction for us. It’s the first piece we have made in about 10 years that we have written, that wasn’t made with “found” text. And it’s the first piece we have made with another company. So it’s different, but of course -- I think still recognizably ours.

I wouldn’t say that we were really all that interested in Westerns in particular as a departure point for this work. That came (as most things do) as a result of the process of making it in rehearsal. It was really a kind of collision of circumstances. First thing -- when we originally traveled to meet and work with the company for the first time in Ljubliana, we had never met them before, and thought it might be fun to start with this book we had in our bookshelf (a gift from a friend in 2005 or so, when we were making Poetics) – with the odd title Cowboy Dances. It’s an old square dance manual from the 1930s and had really detailed verbal descriptions of the dances and patterns, but we had no idea what to make of it, and so we all took this kind of instruction manual and started to work with them using this book as a kind of point of first contact.

Then, during a later visit, when we began to work with the text, there was a ballet barre in the rehearsal room, and we started to use this as an object, until finally it became a real bar, and the rest kind of developed organically out of this – just the ballet barre in rehearsal, and these square dances, then Pavol bought the dancers a bunch of chewing tobacco as a kind of obstacle to work with vocally... next thing you know, you have a Western. Then later, of course, because we were in Ljubljana during the election, we were feeling a lot of strange things about being American -- and I was reading a book of Robert Warshow essays on film which contained his text “The Westerner” and also “The Gangster as Tragic Hero”, and all that started to also inform us, and to really shape the performance.

Pursuit of Happiness, you could say, is actually in conversation with two film genres – not just the Western, but also the War movie. (I like Italian westerns, but – it wasn’t a preoccupation in this case. We looked as much at American westerns as spaghetti Westerns… and even more at war films for this.)

Who would you say are the modern equivalents of cowboys?

I’m not sure we have any... it’s more an idea or an ideal at this point. And maybe an interesting American “character” to look at at this particular juncture in our history. The cowboy lives in a world where guns are ubiquitous, where law is absent, and justice is open to interpretation. It’s a familiar world, right?

What amendments would you make to the notion that “the pursuit of happiness” is an “unalienable right”?

Well, obviously just that your right to pursue happiness also comes with some responsibility… you shouldn’t be allowed to ride over the interests of others to pursue your own dreams. Also, you can have all the “right” to pursue happiness that you want, but they always say: be careful what you wish for… you just might get it. Often happiness comes with a flip side. There’s a hidden cost that bites you in the ass later. 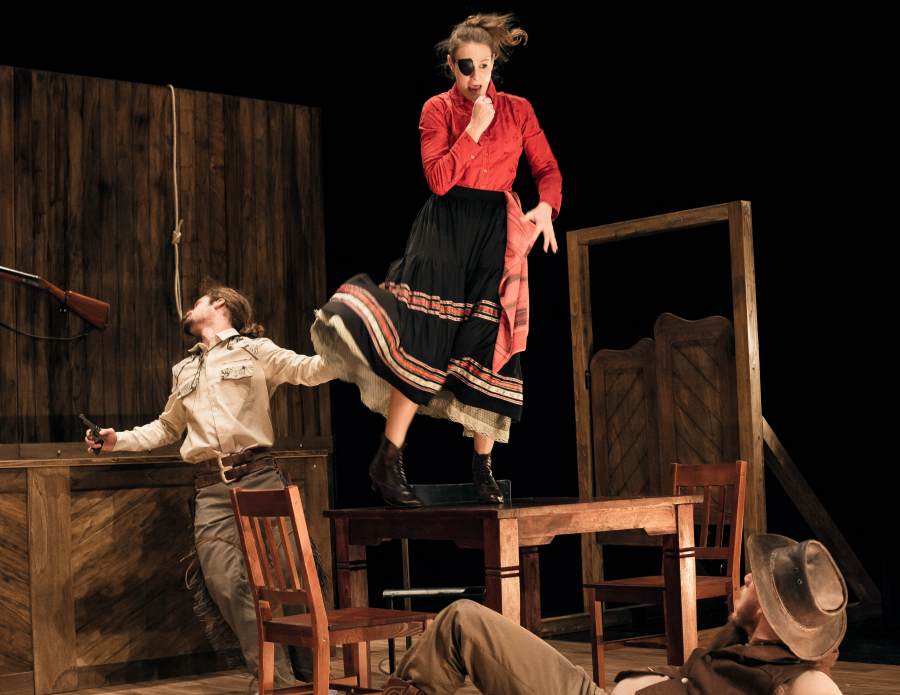 What was it like to work with En-Knap Group? How did your traditional process change by having new artists working with you?

Iztok Kovac, the director of En-Knap Group, had actually asked us a couple of times before if we would make something with his company of dancers, and it was always impossible to say yes, because we were working with our company of actors on Life and Times, and it was important to us to keep generating work for the company to keep everyone employed. So, we felt a lot of responsibility about keeping the money coming in, keeping everyone paid, and it got very heavy over the years – the process of making new work was not light, and there were changes, personally, too, in our lives, that were making it difficult to continue to even think about making live work in the same way we had been.

So when Iztok finally asked again, for the third time -- it was right at the end of our work on Life and Times, we had just finished our final performances of that show, and we were empty, and open about what would come next. Iztok said again that he really had a nice group, they were very keen to push themselves in a new direction, and we thought that finally – the time was right. We knew we really needed some space to rethink what we were doing (we were feeling an urge again to work with written text, after years of dealing with “found” text) and find again the pleasure in making work, and he offered us time and and a place to work and his amazing company.

We were very lucky. The dancers were all wonderful people, hard working, and willing to put in extra time and effort to get to know us - and we them. We started as strangers, and built a lot of trust and understanding over the course of about 2 years. Whenever we left work with them in Slovenia, and came back again – I always felt they were better. They would work even in our absence, and that was really uplifting. Sometimes working on these things you feel alone, but – they took responsibility and initiative. They would go to the football field on their own and practice saying text out loud at great distance to build up their voices… I feel like we were really enriched by this experience of working with them, and knowing that for them this was something they were excited about. It was a pleasure.

What were the challenges of evoking violence through dance?

The fights in Pursuit are really tightly choreographed, and not only between the dancers, but also with the sound engineer, so – they practice all of this before each show every night. It has to be perfect. But aside from the physical challenge of enacting violence on stage – it also comes with a psychic baggage at times. In rehearsal, we had to get everyone used to the sound of the bombings, etc. – at the volume we wanted them. One of the dancers went through the war in the former Yugoslavia during her childhood and those sounds are not just sound for her, so…

Also while we were making this piece, there were so many additional terrorist bombings, mass shootings in America… you’re always aware that this has a reality in the world. We never forget that.

What has it been like for you to create in the year after the election?

We were actually two weeks away from opening the show in Slovenia last year when the election happened in the US. I remember going to sleep at night thinking it was going one way, and waking up you couldn’t even imagine that this was real. It was super strange to be so far from home at that time, making this show which is very much preoccupied with America and its myth and its identity and footprint in the world…what’s surprising to me at this point is how deeply the performance continues to mirror what’s actually going on in this country politically. The sexual misconduct that is at play between the women and the men, for instance – wasn’t such a bullet point then when we were making it, as it is now.

What art has helped you in your own pursuit of happiness?

I don’t think “art” in general really helps me so much. Sometimes it’s just about getting out, reconnecting with the world, getting outside your own head. This year has been a tough one – a lot of death. I’ve lost my mother, our beloved cat, Ancho, died as well. Our other cat was sick for a while… then everything politically, too, that leaves you feeling kind of beat up. It can be hard some days to get up and remember what’s important and do your thing. Right now, what’s helping is actually motorcycling. I realized this year that that’s something I always wanted to do, and Pavol and I took classes at the Motorcycle Safety School this October, got a couple of used bikes and we’ve been – even in this winter weather – getting out and taking a ride every day. I find if I get on my bike, I’m going to see something that reminds me I’m alive. I remember to be present. And that’s a big help right now.

For more information and tickets to Pursuit of Happiness click here.

Reviews: Under the Radar Roundup “The Gates:...
A Life, Well, Spent: Mortality in ‘AfterR...
Interview: It’s the End of the World and Spl...
Interview: Dickie Beau on the Many Unexplored Face...