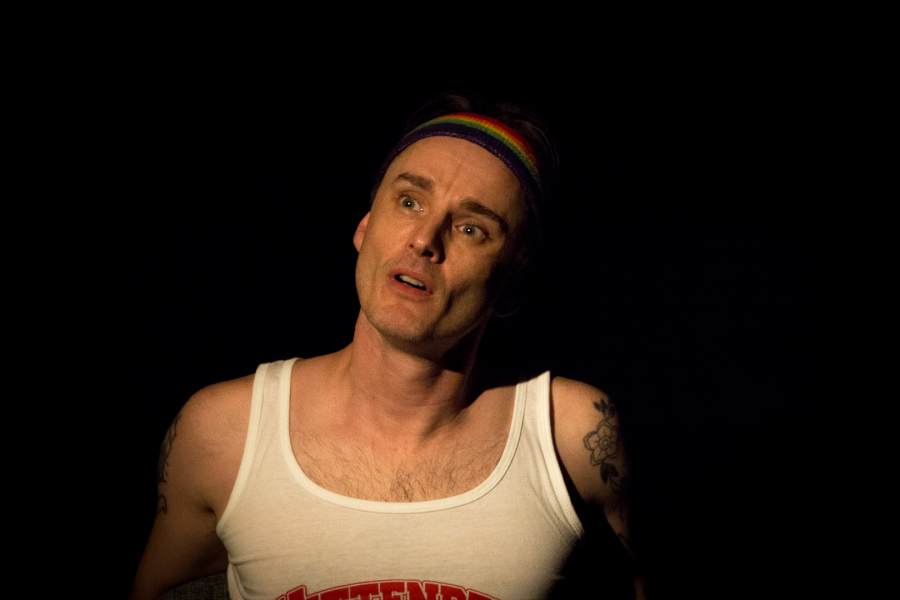 Master lipsync artist Dickie Beau is back in New York with his show Re-Member Me, which will make its US premiere at the Under the Radar Festival, in which he explores Hamlet through the many voices that have spoken for him. Borrowing elements from film versions, legendary productions, and other sources, Beau presents the Danish prince as he's never been seen or heard before. In anticipation of the show he answered our questions about the Bard, ghosts, and Judy via email. His thoughtful, often insightful responses as follows:

Everyone and their father have played Hamlet. How did you go about selecting the ones you wanted to include in your show?

I listened to lots of recordings and began a sort of obsessive research process. I loved listening to John Gielgud’s Hamlets - and there are various recordings. They’re totally histrionic and quite sing-song-y but strangely enough I think they’re possibly the most affective, if affected, renditions I’ve listened to. And Jonathan Pryce’s Hamlet spoke to me because he played the part as if he was possessed by the spirit of his Father’s Ghost - my playback performances are often referred to as being like a medium “channeling” spirits. So, that seemed like it would be interesting to explore. And then I came across the story of a Hamlet of which no recording now exists - Ian Charleson’s. And that story - of the greatest Hamlet almost never seen - is really what my show is about.

Out of all the actors who haven’t played Hamlet, or who didn’t get to play him, who would you have liked to see? Why?

It’s rather an obvious answer, but I suppose James Dean. And if I had to choose just one actor out of all those who did play Hamlet I would have to travel back in time to watch Richard Burbage - the first Hamlet. Hamlet is a part that comes with such baggage, that trails such an army of ghosts, it would be fascinating to see an actor play the part who is not following in anyone’s footsteps.

How do you think Judy Garland’s Hamlet would’ve been?

I’m not sure if you pose this question facetiously or not, but that is an ingenious notion. The more I think about this, the more I feel the cultural loss from it never having happened. I think Judy Garland’s Hamlet would have been the highest point in the development of western theatrical culture. My friend, the playwright Martin Sherman says that what was so remarkable about Judy Garland was the uncanny intimacy her performances had. That you felt she was singing directly to you. Imagine how that facility would translate to the soliloquies! And her emotional availability in acting a role - bringing that sensitivity to Hamlet would have been a revelation.

What were some of your favorite discoveries when selecting the Hamlets for Re-Member Me?

The process of researching Re-Member Me took a turn when I began to investigate Ian Charleson’s Hamlet. Since no recording existed of his performance, I had to try and put his performance back together - to “re-member it” - in some other way. So, I decided to try and meet some of the people who knew him, and who saw his Hamlet. I got to discover his performance through their memories of it. And this journey also included my getting to meet some people who are amazing in their own right - Sir Ian McKellen, Sir Richard Eyre, Sean Mathias… and the former chief critic of the Sunday Times, John Peter, who wrote the one stunning review, which is the sole surviving document of a legendary performance. And this got me thinking about the role of critics differently - I realized that every theatre review is really an obituary. That the theatre space is inherently haunted. And in the case of Ian Charleson’s Hamlet the role of John Peter and his review - which is effectively a eulogy - is quite profound.

Do you have a favorite film Hamlet? I love the Olivier but I also have a very soft spot for the Branagh. Never the Gibson though.

Well, my favourite is most likely the 1921 film starring the silent film actress Asta Nielsen as Hamlet. I’m afraid I can’t bring myself to watch Olivier - for some reason he makes me cringe. I differ from you in thinking Mel Gibson was quite good. Kenneth Branagh made a lovely film. But I think Hamlet is not very well suited to the medium of film. It’s so much about theatre and theatricality that I think much is lost in the transition to film.

Part of what inspired you to do this show was knowing you wouldn’t play Hamlet, how has FOMO influenced your artistic decisions throughout the years?

I don’t know if it’s about the fear of missing out per se, but definitely I seem to be preoccupied with the presence of absence. And i guess they are related. I think it’s something that affected me more in my twenties than now - but not in a productive way. I hopefully have a better sense of humour about myself now, and make a conscious effort to be as present as I can, but when I was younger I was pretty convinced that the life I should be living might be somewhere over the shoulder of whoever I was talking to. Over-dependence on external validation through recognition from avatars of others on social media is a kind of virtual death - or at least a non-living. I mean, no judgement, I get it. But I think I’m more likely to be paralysed by that than stimulated into creativity.

You did Blackouts in between productions of Re-Member Me in London and NYC, what’s the process of traveling from show to show in terms of preparation? Do you need to re-rehearse the shows when you haven’t done them in a while or do they live within you?

I do re-rehearse shows, and I constantly renew them through tweaks. But they also have a long internal shelf-life and when I return to a show after a long time I’m surprised by how much they do live within me. I’m looking forward to returning to the show for The Public’s Under the Radar Festival.

In London you did the show in the same set where Andrew Scott was playing Hamlet so it was like double possession. What was this experience like?

It was a fantastic opportunity and the show resonated so well in that space at that time, it was quite a magical moment. Having the set of Andrew Scott’s Hamlet to work with gave me and my collaborator Jan Willem van den Bosch a set of conditions which really informed key creative decisions about how to make the show. We made it’s first iteration for that set. And we’ve basically re-made it for the specific spaces we’ve taken the show to since. I’ve done lots of shows on other people’s sets over the years, and one can often feel like a poor relation having to adapt to the surroundings - in this case it was very different because the set offered us wonderful opportunities for us to really make ourselves at home in it. And we did!

You missed out on Hamlet but what Bard plays would you still love to tackle?

Wash your mouth out, it’s never too late. John Gielgud was older than I am now when he played Hamlet. So was Benedict Cumberbatch. And so was Andrew Scott. It’s not a done deal yet, dear. But admittedly no one is banging down my door begging me to do it, so I’m in the process of letting it go… I actually don’t know, in all honesty, if I would truly want to play Hamlet should push come to shove. I have really enjoyed performing in Shakespeare in the past - I played Ariel in Deborah Warner’s production of The Tempest for the Salzburg Festival in 2016 and that was a fantastic experience - I think she put on a great production. But she is quite exceptional as a director and I do wonder if in general it might sometimes more rewarding to do Shakespeare than to watch it. I’ve definitely endured more arduous theatre outings to Shakespeare than I’ve enjoyed. So maybe I’m a philistine.

What contemporary actress do you see yourself using for your performances in the future?

Nostalgia is so much a part of what I do that I find it hard to look on the contemporary landscape through an imagined retrospective lens. I think there are always ethical questions around who one voices in playback performance, and why. I hope I make good decisions around this because it’s something I’m very conscious of. Actresses are finding their voices in quite a powerful way right now - I’m not sure if my playing these voices back would add anything to the conversation because they’re doing rather well without me poking my nose in. Maybe there is something interesting artistically there - who knows. It will reveal itself if so. Can I rephrase the question? There are a great many contemporary actresses I would not like to “use”, but that I’d love to collaborate with. Too many to name.

For more information and tickets to Re-Member Me click here.