May 17, 2016
Theater Feature
Interview: “Ross & Rachel” Playwright James Fritz on the Myths We Tell Ourselves about Love

After a sold-out world premiere at Edinburgh Festival Fringe in 2015, the Olivier-nominated playwright James Fritz’ Ross and Rachel will run at the Brits Off Broadway series at 59E59 Theaters. A heartbreaking story of a modern romance, the play takes an unflinching look at the myths that shape our understanding of love. We caught up with Fritz to ask him more about Ross and Rachel.

Where did the idea of Ross and Rachel come from? What was the genesis?

I've always loved rom-coms, and I'd been toying with exploring the way real-world relationships rub up against with the stories and myths we tell ourselves about love. The 'together forever' narrative is such a prominent one in our culture that I thought it would be a fun thing to unpick.

When I was asked to think about ideas for a solo show for Edinburgh by the company Motor, I wondered whether there was a way of writing a two-hander for one performer, and whether that might be in an interesting way into the subject.

I brought lots of text into a room for a few weeks with some great actors and the director Tom [Thomas Martin], and with their help the play gradually started to take shape.

Why the solo show format, giving one actor both the voices in a relationship?

I liked the idea of these two voices being inescapably bound by a single physical presence onstage. It's a nice representation of the idea we sell ourselves of being two halves of the same whole, that concept of oneness or being completed by another person that is peddled in so many of our conversations about romance. It felt exciting to me to have these two characters unable to separate themselves from each other without splitting the performer in two. It's a hard job for Molly [Vevers], the performer, to pull off, but she does it incredibly well. Her performance is the thing I tell people about when I tell them to come to the show.

The show was a hit at Edinburgh; have there been any changes in its transport to New York?

Yeah, I've made some changes to the script and Molly and Tom have been working hard in the rehearsal room to help the show level up a bit based on what we learnt during the run last year.

Being able to do a show again is such a gift, it's exciting to see what we can do to push things further, especially as we're presenting it in a whole new context over here.

The reference to Ross and Rachel is obviously from the popular TV show Friends. In many ways, that show continued to codify certain romantic comedy ideals. How does the play Ross and Rachel subvert them?

Friends was interesting because Ross and Rachel had to be together at the finale, whether it made complete narrative sense or not. A similar thing happened at the end of How I Met Your Mother.
That's not to be critical of Friends or series like it - or to criticise the writers. Because if we're all honest with ourselves, I think most people would have hated it if Ross and Rachel hadn't got together at the end. We crave that resolution, that we don't have to worry about how happy those characters will be anymore because they have each other. Never mind that one of them just gave up her dream job in her dream city to get back with her ex-boyfriend.
The play looks at neat conclusions like that - the idea that all of us are 'meant to be' with someone else - and pushes past it to what happens in the murkier, messier parts of a relationship, and what happens to a person when they find themselves almost completely identified by who their partner is. In many ways it's about what happens to your identity when the whole world is willing you to be with someone else. 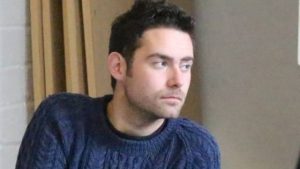 A lot has been written about how love has changed - Aziz Ansari and Esther Perel are a couple of authors that come to mind. Whose writing have you been influenced by in creating this play?

I'm always trying to steal from people who I think are amazing - people like Caryl Churchill, Anne Washburn, Young Jean Lee, Sarah Kane, Duncan Macmillan, Tim Crouch, Chris Goode.
There's also loads of great writing and thinking about romance and culture around at the moment. As a guilty pleasure, I'm particularly fond of this complete and utter take down of Love Actually.
It seems like every day there's a new think piece about millennials. How do you think millennials think and feel about love - have things really changed that much?
Everyone's different, aren't they?
I guess our relationship to these traditional romantic narratives is formed when we're so young, it's impossible for us not to be influenced by them one way or another, even if we set ourselves in opposition to them.
It feels like we're moving towards a place where more people question them, or embrace alternatives (but maybe every generation feels that way). Divorce has become so common that that can't help but affect our concept of 'together forever', even if we don't like to admit it sometimes.
But we still use the same language at weddings and in songs. We still want to believe in the idea of true love forever, because in principle it's a great, romantic idea. It's in practice where it becomes problematic.

What are some of your favorite love stories?

My parents married young, divorced, didn't see each other for the best part of a decade, bumped into each other at a friends wedding, got back together and married again when I was a teenager. I like that one a lot.

Ross & Rachel plays as part of the Brits Off Broadway festival at 59E59 Theaters through June 5.