Based on William Thackeray’s novel of the same name, Kate Hamill’s new play Vanity Fair explores the challenges of moving up in the world. Becky Sharp struggles to do so from a disadvantaged start – though she finishes her education alongside wealthy young women like Amelia Sedley, who has a world of opportunity at her feet, the orphaned Becky has nothing but her ambitious wits to save her from her bleak fate of becoming a governess.

As with any period piece, the costuming and aesthetic of the show is key to transporting audiences to the world of the story. Valérie Thérèse Bart, the costume designer for Vanity Fair, told us about her process of creating the costumes for the show.

Tell me a bit about your vision for Vanity Fair and how you approached the costume design.

As far as my process for how I approached the piece, I was fortunate enough to have worked with Eric [Tucker, the play’s director] in the past, and having seen Sense and Sensibility [playwright Kate Hamill’s last show], I knew the direction he would want to take, which is a very simplified version of the period. The changes happen really quickly. He doesn’t like to spend time watching costume changes or furniture move. Everything has to happen very seamlessly and magically. So that’s how I approached it. Boiling it down to its core. What is one piece that will represent that character and be enough to tell that story, and be easy to take on and off.

Going off that, I was wondering what you were hoping to convey about each character through the costuming, especially the two main women.

From the get-go, it was important to me that the story be clear about their journey, starting from a certain point and then halfway through ending at a certain point, and by the end being in a completely different place, and having grown and gone through something. In this period, all the overdresses and things they put on really did exist, and women really did wear overdresses over base dresses. I didn’t have to reinvent the wheel with that, I just had to make sure they could take things off and put them on at the right time, and how we can do these things seamlessly in the transition. It was really important to see the differences, because they start in such a different way, and when one peaks the other has fallen out of favor. By the end things switch. It’s nice to see them standing together next to each other, and really see the differences. 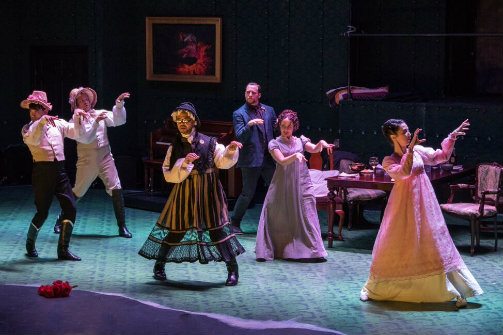 The story takes place in the period of the 1800’s, but the play itself draws on modern elements. Did you reflect those mixing periods in your costume design?

I read the novel, and there actually is that modern tone already, because it’s narrated through this person that Kate wrote as the manager, who narrates the story and makes you feel like you’re in on the action a little bit. So it’s very modern even in the novel. I was really surprised when I read it to realize that Kate didn’t have to mess with it too much to put in that modern tone. We just turned it up a little more by making the manager a modern man. As far as putting anything modern into the design of the period, we had to rig things and do things to the period garments in order of them to be more comfortable for the actress to wear and be as physical as they are. The women do wear corsets underneath, but they don’t reach down to their hips to allow more freedom of movement in the lower half of their body. Which is something that actually did exist.

We did go through iterations early on when we started the design, of maybe doing something where Act I is period and Act II is modern, or vice versa. But we discovered that it needed to be period throughout, because it’s such a period story. The manager was going to be originally of the period, but we decided it would be best if he was a modern man, and a connection between the audience and the story he’s telling.

A lot of the male actors alternate between roles, and sometimes take on female roles as well. How did that affect your costume designs for them?

Knowing Eric and his humor, and again having seen Sense and Sensibility, I knew that he would be totally interested in approaching it really simply. How can I help the actors become the character? I boiled it down to the very simplest piece of clothing that could make this character happen, but also expecting for the actors to bring that to the table as well with gestures or even a prop. So sometimes it would be a negotiation between, does this character actually need a piece of clothing, or is it going to be a gesture, or is it going to be a prop? It’s about finding what defines this character. So those were things that were discovered through the rehearsal process, and also through tech as we added all the pieces in and started working with it. Mostly it was simplifying. And the actors were amazing. I knew from the start that this was going to be a good group. It was interesting that the two women are the constants. The rest of the men play various roles, including women, who are all caricatures of women, essentially. I thought that was interesting as well. I felt like that gave us license to kind of go the funny route. If it had been serious characters, that would have been a different story.

Were there any thematic concerns within the play that you kept in mind while you were creating the costume design and aesthetic for the show?

I think, for me, it was definitely important to uphold these women. Knowing Kate, and why she became a playwright and writing plays that were very female driven. It’s all about society and the social ladder, and turning it on its head and shining a light on what was happening at the time, but it’s also still happening. It was really important for me to do this in a very honest way, so that the bases of what the actors wear, what they wear the entire time, is true to the period, and not caricatures. Even the pieces they take on and off are period appropriate, it’s just not completed. I did at one point think, maybe I’m not pushing it far enough, but I think it was important to stay true to the period, and let the story be heightened.