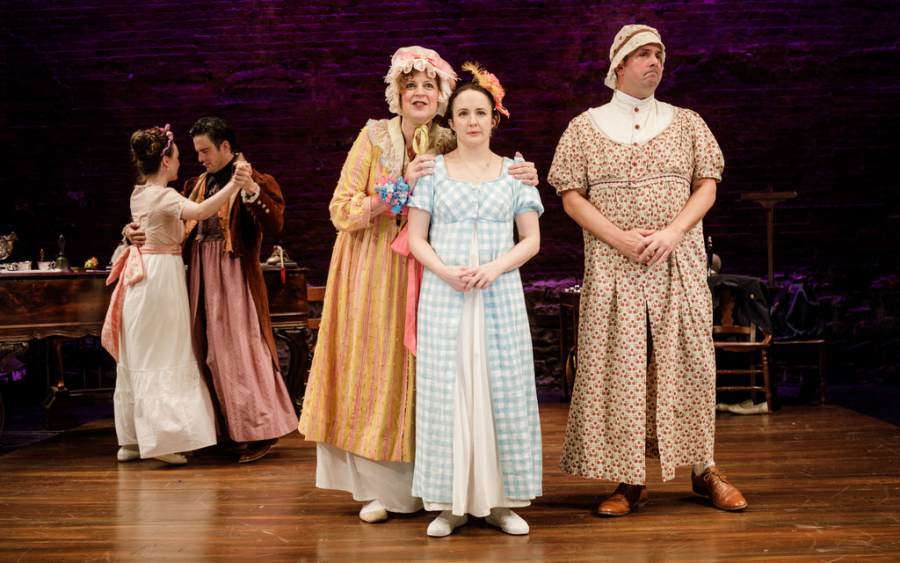 Director Amanda Dehnert pairs up with playwright and actress Kate Hamill for a production of Pride and Prejudice at Primary Stages that is ridiculously fun, intoxicatingly spirited and deeply moving. Ms. Dehnert, an innovative and critically acclaimed director who regularly directs at the Oregon Shakespeare Festival as well as many regional theaters including Arena Stage, South Coast Repertory and Lookingglass Theater, is also an Associate Professor of Theater at Northwestern University. She brings a unique theatrical inventiveness to productions that range from Shakespeare (an all-female Julius Caesar) to big Broadway musicals (an exquisitely intimate My Fair Lady) to original stories (The Verona Project). Her work has been seen in New York at The Public (Richard III) and recently, in tandem with conductor/musical director Marin Alsop, a spectacular West Side Story for Carnegie Hall/Weill Music Institute and the Knockdown Center in Queens that brought professionals, high school students and community members together on stage and gave the audience an immersive experience of this great musical.

With a generosity of spirit that radiates over the telephone lines, succinct eloquence and a lovely musical laugh, Ms. Dehnert spoke with me about the joys of collaboration, challenges of adaptation and being drawn to telling the epic stories in the theater.

What drew you to this famous story? Does a 19th-century novel have anything to say to us today?

I think that Jane Austen is a very modern writer and she is capturing a lot of things about what it means to be a woman in society that are still very relevant. I really enjoy the classics and especially love being able to take stories that people already think they know and let them see the story again as if they are seeing it for the first time. And so tackling Pride and Prejudice was just a great opportunity that I couldn’t pass up.

Would you call yourself a Janeite or an Austenite? I don’t know which one is the appropriate term.

Well you know I actually….Kate and I often joke that there are Austenites and Brontëites, and I’m probably actually a Brontëite. But I love Jane Austen’s work.

How did you and Kate Hamill initially connect?

We were introduced kind of through the project. Davis McCallum, artistic director of the Hudson Valley Shakespeare Festival, and I had been talking about finding something to do together and he was going to be producing this play of Kate’s. He thought that we might hit it off and we did! But I have to say now that I’m thinking back it might have been Braden Abraham, artistic director at Seattle Rep. I did Pride and Prejudice out at Seattle Rep in between Hudson Valley and this Primary Stages production and we were all getting to know each other all at the same time. I would have to check the actual order of the phone calls, so to be safe I’ll say there was Davis at Hudson and Braden at Seattle, they were both doing Kate’s play and thought I’d be a good match for it!

So you’ve been doing Pride and Prejudice a good portion of 2017.

Yes, I’ve been doing it off and on since April.

This is not, I would venture to say, your mother’s Masterpiece Theater Pride and Prejudice.

Kate’s adaptation seems to have one foot in Austen’s England and one foot in today’s culture, plus there’s this marvelous infusion of well-known pop music. As a director how did you approach the script and work with the actors in creating this piece?

Well you know, I’m a big believer that people are people, that society changes but human nature doesn’t really change that much. We were all interested in creating a world that supported the plot that happens in Pride and Prejudice, because it is dependent on some realities that existed in society then for young women concerning marriage. But also making sure that we felt like we were doing the play now. From that point it’s just a lot of collaboration and trial and error and bringing all the ideas to the table and ultimately letting the characters be as fully human as they are and not just characters in a Regency setting, but people in a story that’s being told in a theater.

Well, mission accomplished because it was so delightful and so very meaningful at the end. My friend who came with me to the show afterwards remarked how much she wanted her teenage daughter to see the show, that her seventeen year old would totally connect with this universal story.

There is a wealth of music in the production. Did you contribute musically to the show?

Nothing compositionally. I handled the live bits of music that the cast do, but the sound design was done by Palmer Hefferan who was really wonderful. And the cast is very, very musical as a group, so I’d say we all just kind of did it together.

Did Kate choose the songs or did you?

I think it was a combination of ideas I had, Palmer had and Kate had. And then ideas the cast had. Just trying to bring it all together and looking for the right ways to ground some of the moments in a more twentieth century landscape.

What important qualities do you look for in the actors you’d like to work with?

They should be good people. (Laughs) And creative and willing to act with others. What happens on stage is very much about the whole group. So I like actors who are interested in really being up there with other people, not just with themselves and their material.

Were there any challenges working on an adaptation of a famous novel?

I know it was always tough for Kate to balance making sure that the lines from the novel that are really, really famous, or well known or often quoted…it was important to her that those words still live within this adaptation. And then making sure that it was her telling of the story. Because it is very much an adaptation, I mean it’s not simply editing the book. So making sure her telling was really what she wanted it to be and supporting that. I think Kate did a great job, so it was really just great to be along for the ride.

Sounds like it was a tremendous pleasure working with Kate as a collaborator?

Who and what influences you as a theater artist?

Gosh, I guess….oh boy…I don’t have a good answer for that. I think that people are fascinating and that the theater is a really important part of our culture. I just want to be a part of the continuum of artists that put great stories on stage.

You’ve directed Shakespeare and big musicals like West Side Story. Are you always drawn to big stories?

Yes, probably. I like the stuff that’s about the big challenges we face as individuals and as communities and so that often translates into these kinds of epic stories. But you can find those challenges in small stories as well, so it’s more that I like to get into the stories that are really about how we deal with being alive, how we deal with being alone, how we find people to connect with, how we face adversity, how we choose to shape our lives, how we find happiness. Stuff like that.

Yes! The good stuff! What’s next for you? Do you have any dream projects?

You know, dream projects…oh, there are so many stories that I love that it is really hard to name them, honestly. What I have coming up next is a production of Love’s Labour’s Lost for the Oregon Shakespeare Festival in the spring. And between now and then I’ll be spending my time teaching and just, you know, doing the day to day.

And when are you back directing in New York? We need you, Amanda! We need your theatrical vision!

Well anyone who wants to get in touch with me and talk to me about a project is welcome to. (Laughs) I always hope for the opportunities!

Review: Bedlam’s ‘Sense and Sensibility’ at the A.R.T.

Every director puts a unique spin on whichever play they produce, but not every director does so by literally incorporating spinning. This is how Eric Tucker chose to direct Bedlam’s Sense and Sensibility, Kate Hamill’s adaptation of Jane Austen’s novel. Presented by Harvard College’s American Repertory Theatre (A.R.T.) at the Loeb Drama Center, probably the greatest factor that makes this production unique is the unorthodox use of movement and scenery in Tucker’s direction and John McDermott’s scenic design. The set pieces—window panes, door frames, couches, and chairs—are all mounted on wheels. The actors roll the furniture around to create different settings and convey relationship dynamics, most notably the reversals of expectations that are the mark of Austen’s works. Sense and Sensibility tells of two sisters who embody opposite emotional extremes: Elinor (Maggie Adams McDowell) is rational and reserved, whereas Marianne (Jessica Frey) is sentimental and exuberant. They both come to realize that they do not know each other or their acquaintances as well as they think, and that people’s outward expressions (or lack thereof) do not always reflect their true thoughts and emotion …Read more

Interview with Karin Coonrod of ‘BabetteR...
Interview: Robin Abramson on Starring in the NY Re...
Interview: Bebe Neuwirth, Tony Speciale, Telly Leu...
Review: For Peter Pan on her 70th birthday