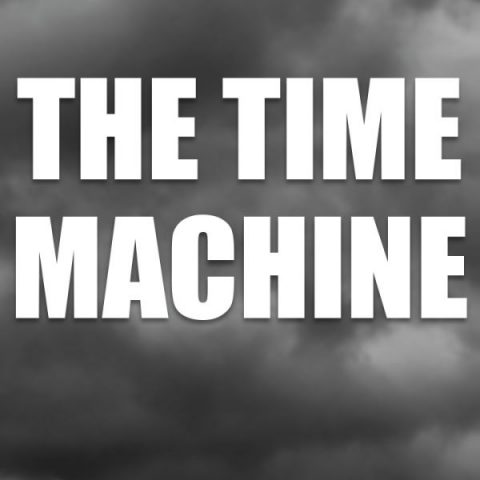 The Time Machine is a musical Sci-fi love story with elements of comedy and horror. We hope that we've created a unique and modern theatre experience that everyone can enjoy.

Dave: My mother used to play a lot of musical cast recordings, but the first musical that had a big impact on me seeing was the movie version of Oliver! in the theatre when I was very young. I loved musicals ever since, but it was not until Phantom of the Opera that I knew wanted to write a musical.

It's like Rodgers and Hammerstein meets Nightmare before Christmas.

If you had a time machine, when would you travel to?

Brenda and Dave: 1915. We both love the early years of Broadway and Hollywood, so we think it would be amazing to meet the people and witness the events that shaped both industries.

What drew you to the original source material (H.G. Wells' novel)/made you want to adapt it?

Dave: I've always loved the cliffhanger aspects of the traditional musical plot, and one day I was watching the 1960 movie version of the The Time Machine and when the scene where the protagonist's time machine is stolen. I occurred to me that the scene would make a great ending for the first act of a musical version. Then the wheels began turning, and I knew I was on to something important. That said, our musical is not based on the movie, but on the classic novel with an added subplot.

Hopefully we will create enough excitement at NYMF to be able to interest a developing theatre or land a producer. Like every other theatre writer, we eventually hope to be able to present it to audiences on Broadway.

“There are no set endings,” says Thomas, the hero of David Mauk’s and Brenda Mandabach’s musical The Time Machine (directed by Justin Baldridge at The Acorn Theatre at Theatre Row). Based on the novel by H. G. Wells (who coined the term “time machine,” by the way), this NYMF production is delightfully inventive, whimsical, exciting, and touching. That doesn’t mean it’s perfect, but it does mean it’s a lovely adaptation of Wells’s novel – and an enjoyable experience for theatre-goers who like plays with a little sci-fi, a little steampunk, and a little romance. Broadway-alum Michael Hunsaker is brilliant as the young inventor (Thomas) who constructs the world’s first time machine but faces ridicule and danger when he tries to show it to the 1900 World’s Fair committee. Bright, brave, and refreshingly pure as a character, Hunsaker’s Thomas has an enthusiasm and child-like sense of wonder that renders him immediately endearing. Coupled with Hunsaker’s strong, forte vocals, it’s a recipe for narrative success. As Wenissa, the girl from the future who calls out to Thomas across 9,000 years, Bligh Voth is beautiful and resilient. Her purity of spirit matches that of Hunsaker’s character, …Read more